2.7 Million Jobs in the Arts Have Been Lost Since the Pandemic Began

To allow millions of workers in the arts to end up jobless – and permit the breakdown of the institutional infrastructure that makes the performance and showcasing of art possible— would leave this country culturally impoverished for years to come. 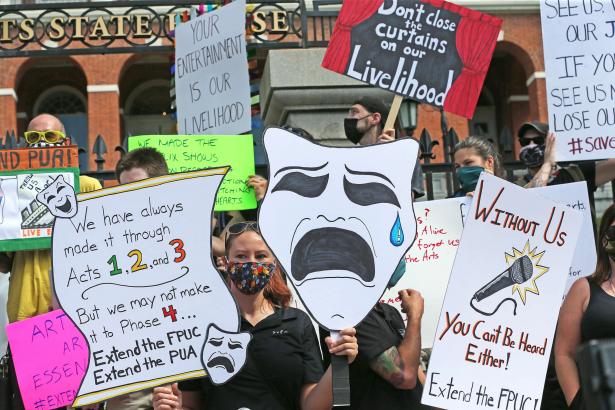 Performance artists rally in front of the the Massachusetts State House in Boston for extended FPUC, the extra $600 provided on top of unemployment during the COVID-19 pandemic, on July 20, 2020., DAVID L. RYAN / THE BOSTON GLOBE VIA GETTY IMAGES

This past summer, the Brookings Institution released a report on the pandemic’s impact on the U.S.’s creative artists and the institutions that showcase their work. The numbers were overwhelming: a loss of 2.7 million jobs, and a collapse in arts-related revenues to the tune of $150 billion.

In the fine and performing arts category (visual arts, music, theater and dance), Brookings estimated that as the pandemic played out fully, half of all jobs in these fields would disappear.

Now, nearly a year into the crisis, the on-the-ground consequences for artists are all too real. In New York, the fabled Metropolitan Opera House recently announced a lockout of its stagehands after their union refused to agree to potentially multi-year wage cuts of upward of 30 percent (to be in effect until ticket sales are restored to pre-pandemic levels), while the New York Philharmonic’s unions accepted lower wages in the face of a lost music season. Across the country, in San Francisco the opera company imposed a 50 percent pay cut on its members, while the city’s philharmonic opted for a still-draconian 30 percent cut. Early in the shutdowns, the Los Angeles Board of Supervisors reported that a large proportion of the nearly 900,000 workers whose jobs are tied to Hollywood entertainment industries were out of work. Since then, some film and television production has resumed, but on a very limited basis. By and large, Los Angeles has remained in shut-down mode throughout most of 2020, and artists have not received sufficient support as they wait for the pandemic to abate.

As states impose, loosen and then reimpose shutdowns, without adequately supporting individuals and businesses, so many national movie theater chains have also ended up furloughing their employees. Recently, the Regal chain closed hundreds of cinemas nationwide and furloughed 40,000 workers.

This fall, the American Alliance of Museums estimated that a third of museums in the country that shut down in March haven’t yet reopened, and those that have are operating with extremely limited attendance thresholds, and thus aren’t bringing in enough dollars through ticket sales to sustain their operations over the long term. As in other sectors, there’s not nearly enough federal support bolstering museums, from small local ventures to large, internationally renowned institutions, during this crisis.

The pandemic has made acute a problem in American arts that has been festering for years.

Despite the distribution of National Endowment for the Arts grants, by and large, American artists are more at the mercy of the markets than are, say, continental European artists, who have long been generously subsidized by their countries’ governments. Online music distribution systems such as Spotify have made it more difficult for musicians to survive simply on the proceeds from sales of their music. Many classical music venues and institutions have been in financial turmoil for the better part of a decade — some since the last financial crisis in 2008-9. And a brutally cutthroat media market in the U.S. has put a premium on rant-radio and rant-cable-TV, often at the expense of the arts.

There are solutions, but they involve a willingness to think outside the usual political boxes.

Earlier this year, Sen. Amy Klobuchar proposed a piece of legislation that she titled the Save Our Stages Act, which would have pushed $10 billion in Small Business Administration grants to arts venues to help tide them over during the pandemic. So far, however, the Act hasn’t passed, and nor have its basic principles been incorporated into the slimmed-down economic relief package that Congress is, somewhat half-heartedly, inching toward in these final days of 2020.

Klobuchar’s proposal is a start, but it’s insufficient given the vast scale of the crisis now facing the creative classes in the U.S.

There is, however, a template for what could work here. And that template goes back to the New Deal era, when Franklin D. Roosevelt’s administration set up a series of public arts programs to provide funding and projects to the huge number of dancers, photographers, theater workers, musicians, writers, and others who could not survive in a private market that had imploded.

The first of these Roosevelt-era programs was known as the Public Works of Art Project (PWAP), and it directly hired thousands of artists, muralists and sculptors around the country to produce art — many examples of which ended up adorning federal buildings.

More long-lasting, however, was PWAP’s successor program, the Federal Art Project, run under the aegis of the Works Progress Administration (WPA), which channeled federal resources into sustaining the visual arts from 1935 to 1943, and provided seed money to young artists such as Jackson Pollock and Mark Rothko, who would emerge as huge cultural icons in the post-World War II years. What made this project so important was its emphasis not just on high culture and classical art, but on a wide range of art and of artists, including new, seemingly edgy professions, such as graphic art. And instead of only focusing its resources on cultural hubs such as New York, it distributed grants around the country and sent artists out to the most remote regions to chronicle the lives and cultures of people in those communities.

There were also, during the New Deal, a range of other projects to keep the arts alive during the economic crisis. Five of them, including the Federal Theater Project, were created as a part of the WPA. The theater project funded works by such figures as Orson Welles, including the (in)famous production of the pro-union musical, The Cradle Will Rock, in New York City in 1937, which was canceled because of its radical message, only for the actors and audience to march through the center of Manhattan, take over an abandoned theater, and hold the production anyway.

Obviously, the pandemic calls for a somewhat different federal response. Simply employing out-of-work actors won’t make the production of live-audience theater productions more possible, given the restrictions of social distancing. But, such direct federal (or state and local) hiring and subsidies could keep artists and artistic centers afloat over the coming months, as the vaccines are distributed and before in-person arts events can be fully restored.

With adequate financial backing, arts institutions could expand on the live-streaming concerts and plays that have substituted for the real things these past nine months, and, in so doing, they could keep growing numbers of artists employed. They could also utilize outdoors spaces, parking lots, and other nontraditional arts venues — as some theater and opera companies (including the respected Michigan Opera Theater) have already done — to safely put on live shows. Grants could be allocated by cities, states and federal agencies to hire artists to reimagine urban infrastructure, as part of a Green New Deal aimed both at mitigating and adapting to climate change, and also aimed at making cities more livable and sustainable.

The United States has tremendous economic resources. To allow millions of workers in the arts to end up jobless – and permit the breakdown of the institutional infrastructure that makes the performance and showcasing of art possible — would be a colossal failure of the political imagination. It would leave this country culturally impoverished for years to come. And it would render the post-pandemic world less vibrant, less beautiful, less inquisitive and curious about the great questions that the arts have always sought to answer.

Many other countries have found ways to subsidize and nurture the arts in recent years, and in particular, over this past year of pandemic and economic shutdowns. It’s past time for the United States to make similar investments to protect the people and institutions who provide us with art, with song, with melody during good times and bad. After all, who wants to emerge into a post-pandemic world where the museums and the theaters, the cinemas and the concert venues, and the musicians and actors and painters have all gone gently into the night?

We need your help — today!

Time is running out to make your end-of-year tax-deductible donation for 2020.

Please give whatever you can to help us reach our goal and keep Truthout strong in the months to come.

Copyright © Truthout. May not be reprinted without permission.