Biden’s International 'Summit for Democracy' Not a Very Good Idea

To undo the damage Trump has wrought at home and abroad, the US must move past outdated foreign policy ideas and resist traveling further down a failed course that divides the world into hostile camps, and prioritizes confrontation over cooperation. 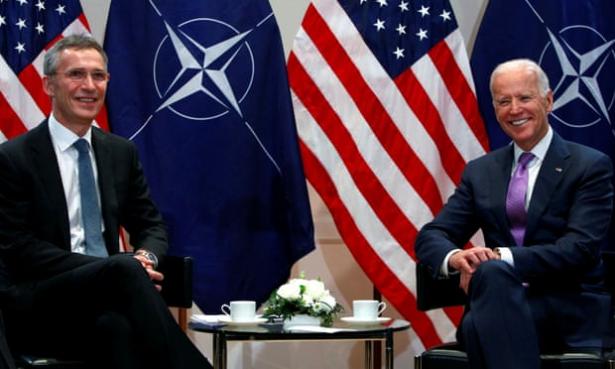 Then US Vice-President Joe Biden and NATO Secretary- General Jens Stoltenberg in Germany in 2015. Reliance on military blocs won’t meet challenges like the pandemic, deepening inequality, and the climate crisis. , Michaela Rehle/Reuters

Democracy is in disrepair. Over the past four years, President Donald Trump has mocked its rules and norms, accelerating the decay of democratic institutions in the United States. We are not alone: a global reckoning is under way, with authoritarian leaders capitalizing on broken promises and failed policies.

To reverse the trend, President-elect Joe Biden has proposed to convene a Summit for Democracy. His campaign presents the summit as an opportunity to “renew the spirit and shared purpose of the nations of the Free World”. With the US placing itself once again “at the head of the table”, other nations can find their seats, and the task of beating back democracy’s adversaries can begin.

But the summit will not succeed. It is at once too blunt and too thin an instrument. Although the summit might serve as a useful forum for coordinating policy on such areas as financial oversight and election security, it is liable to drive US foreign policy even further down a failed course that divides the world into hostile camps, prioritizing confrontation over cooperation.

If Biden is to make good on his commitment to “meet the challenges of the 21st century”, his administration should avoid recreating the problems of the 20th. Only by diminishing antagonism toward the nations outside the “democratic world” can the US rescue its democracy and deliver deeper freedom for its people.

The Summit for Democracy assumes and reinforces the division of the Earth between the nations of the Free World and the rest. It revives a mental map that was first drawn by the managers of US foreign policy eight decades ago during the second world war. “This is a fight between a slave world and a free world,” said Vice-President Henry Wallace in 1942, calling for “complete victory in this war of liberation”.

But we no longer live in Wallace’s world. The commanding crises of our century cannot be found in the conflict between countries. Instead, they are common among them. The American people will be secured not by any “complete victory” over external adversaries but by a sustained commitment to improve life in the US and cooperate as a partner across traditional boundaries of US diplomacy.

Animated by an antagonistic impulse, the Summit for Democracy is liable to make the world less safe. It risks hardening antagonism with those outside the summit, reducing prospects for truly broad collaboration. The coronavirus, this generation’s deadliest foe to date, pays no heed to whom the US deems its ally or its adversary. The same is true of a changing climate. Because our gravest threats are planetary, it is hard to see why a club of democracies is the right unit to “defend our vital interests”, as Biden pledges to do.

In addition to excluding needed partners, the summit is unlikely to shore up democracy. The “free world” of today is actually the free-ish world, populated by democracies with adjectives, rather than shining exemplars. The president of the United States, to take just one example, is currently rallying his supporters to reject the outcome of a free and fair election, more than one month after its victor became clear.

The roster of participants in Biden’s summit is therefore bound to appear arbitrary. Will invitations go out to Hungary, Poland and Turkey, our increasingly illiberal Nato allies? How about India or the Philippines, partners in Washington’s campaign to counter China?

Perhaps in recognition of this dilemma, Biden has proposed a Summit for Democracy rather than a Summit of Democracies. Yet his invite list is bound to exclude others, at least if he wishes to avoid the absurdity of promoting democracy with the likes of Jair Bolsonaro or Mohammed bin Salman.

Within the framework of the summit, then, Biden’s choice is inescapable and unpalatable: legitimate the democratic pretenses of authoritarian leaders or mark them as beyond the pale.

Democracy is no doubt under threat: Biden is right to ring the alarm. But if the Summit for Democracy is likely to reinforce the vicious cycle of international hostility and democratic discontent, what might set us into a virtuous one of democratic repair?

“Democracy is not a state,” the late Congressman John Lewis wrote this summer. “It is an act.” The Biden administration should apply Lewis’s parting insight not only by restoring democratic norms but also and especially by promoting democratic rule. Rather than fixate on the symptoms of democratic discontent – the “populists, nationalists and demagogues” whom Biden has pledged to confront – his administration should attack the disease.

He can start with political and economic reforms to make democratic government respond again to the popular will. This agenda requires a foreign policy of its own: self-government at home rules out tax havens abroad, for example. The United States should work with countries around the world to root out ungoverned wealth and illicit finance so that democracy in America – and everywhere else – can serve the interests of citizens.

Second, the United States should make peace in the world, rather than wage its endless wars. Two decades of interventions across the greater Middle East have not only discredited the image of democracy in whose name they were waged. They have also hobbled democracy within the US. By treating an array of foreign nations as mortal threats, leaders of both political parties injected xenophobic hatred into the veins of American society – enabling a demagogue like Trump to rise to power on a promise to get tougher still. Democratic repair will therefore require the Biden administration to demilitarize US foreign policy.

Finally, the United States should reinvent a system of international cooperation undivided by the “democratic” fault line that the summit seeks to impose. Climate change and pandemic disease demand collective action on the widest scale. If the Biden administration aims to renew the spirit of democracy, it must bring that spirit to the institutions of global governance that the United States has insisted on dominating instead.

Self-government at home, self-determination abroad and cooperation across – these should be the watchwords of new agenda for democracy. Going beyond mere summitry, this agenda will nurture the conditions of democracy rather than impose its forms. It will require the US to practice democracy in its foreign relations, not demand that foreigners become democratic or else.

After all, democracy is what happens around the table, regardless of who sits – for a time – at its head.

[David Adler is a political economist and general coordinator of the Progressive International. Stephen Wertheim is deputy director of research and policy at the Quincy Institute for Responsible Statecraft and research scholar at the Saltzman Institute of War and Peace Studies at Columbia University. He is author of Tomorrow, the World: The Birth of US Global Supremacy, published by Harvard University Press.]