In a new book, Alicia Garza writes, “We can’t be afraid to establish a base that is larger than the people we feel comfortable with.” “The Purpose of Power: How We Come Together When We Fall Apart.” 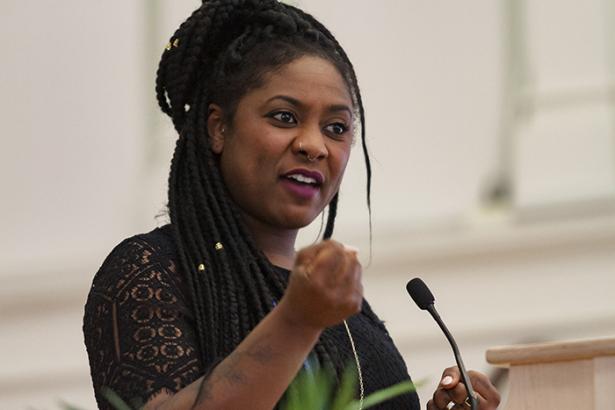 Joe Biden may have been calculated in his efforts to project calm and stability in the waning weeks of the campaign, but the soothing influence of the incoming Biden Administration has been decisively undercut by the post-election stunts of Donald Trump, which erupted, on January 6th, into an open insurrection. As the U.S. remains mired in the coronavirus pandemic, the debates over the provision of health care and housing have become even more intense, if not desperate. Just as fraught are the unresolved questions concerning the grip of racism. Despite all of the platitudes and pledges to end “systemic racism,” its stain on the country has never been more apparent. African-Americans continue to be hospitalized for COVID-19 at nearly four times the rate of white people. Black unemployment, which is at nearly ten per cent, remains several points higher than the national rate. According to National Geographic, of the twenty-five U.S. counties with the highest projected food-insecurity rates, only four are majority white, and all of those are in Kentucky.

The political fault lines are not just between Democrats and Republicans. Indeed, for the former, the anxiety about the election’s outcome was not limited solely to fears of what four more years of Trump could produce. Progressives were just as worried that a Biden Administration would squander the opportunity to pursue transformative reforms that the U.S. overwhelmingly needs. For all of Biden’s testimony that he feels the pain of the public, those on the suffering end of the pandemic and the unemployment crisis are not in the mood for honeymoon hopefulness. They want action and results. But translating political desires into political action is a tall order. The dysfunction of the American state is part of what has compelled such passionate and prolonged political protest. Into this hectic fray, Alicia Garza, a co-founder of the Black Lives Matter Global Network and the originator of the generational slogan, has launched an extraordinarily well-timed book, “The Purpose of Power: How We Come Together When We Fall Apart.”

Garza has been an organizer for more than twenty years, and the book is largely drawn from her experiences in a multitude of grassroots struggles. Born in Oakland in 1981, Garza has spent most of her life in Northern California. She was already active in campaigns against gentrification and police brutality when Oscar Grant III was killed by the Bay Area Rapid Transit police, on New Year’s Day in 2009, just blocks from her home. It was only weeks before Barack Obama became the country’s first Black President and more than two years after Ron Dellums, a Black democratic socialist, was elected mayor of Oakland. There was so much expectation that life would be different with these elected Black leaders, and then so much disappointment as murders by police pointed to more of the same. When George Zimmerman was acquitted, in July, 2013, of the murder of Trayvon Martin, Garza writes, “I cried for who we are, who America is, that we could let a child be murdered by an adult and let that adult get away with it.” Zimmerman’s acquittal and the parlous standing of Black American life that it signified prompted Garza to post an elemental declaration on Facebook: “Black people. I love you. I love us. Our lives matter.”

Garza’s book is not centrally about Black Lives Matter, the global network and organization, nor is it about the movement that has taken on this phrase as its central slogan. In part, that reflects still palpable tensions over the origins and authors of the movement, over who is credited and who is left out. Garza rightfully demands recognition for the roles played by herself, Patrisse Cullors, and Opal Tometi in connecting activists around the country and drawing international awareness to the crisis of racist police violence in the United States, but her goals extend beyond the struggle against police brutality or even the criminal-justice system. She is primarily interested in the larger question of how to move from engaging in protests and mobilization to acquiring the political power necessary to transform the conditions in poor and working-class Black communities. For Garza, this is bigger than Black Lives Matter: really, it is a demand for a different kind of society. “What if our leaders were as afraid to disappoint Black people as they were afraid to disappoint lobbyists, banks, and other corporate actors?” she writes. “When we declare that our future is Black, what we mean is that addressing the needs, concerns, hopes, and aspirations of Black people will bring about a better future for all of us.”

For Garza, achieving this kind of social reorganization and redistribution begins with an understanding of how the deep inequities that strangle our society came to be. Early in the book, she offers a surprising discussion about the rise of the conservative right and its political consolidation during the successive terms of Ronald Reagan. This is critical context for those who compare the current iteration of Black struggle to the civil-rights movement. Even in the fury of the rebellions of the nineteen-sixties, Black rebels had a glimmer of optimism, seeing their struggles as part of a global uprising for justice and democracy. The response of Democratic Party officials to every outbreak of violence—bearing new programs and opening new veins of spending—connected activism and revolt to tangible change in people’s lives. Garza’s account of the consequences of Reaganism makes clear that the Black Lives Matter generation came of age in the rubble of the civil-rights era, with the retrenching politics and policies rooted in Reaganism but readily inherited by a Democratic Party all too willing to do the bidding of the right. As Garza recalls, Bill Clinton signed two landmark pieces of legislation—the crime bill of 1994 and welfare reform in 1996—that “identified Black people as a threat to the American way of life.” The further we got from the era of Black rebellion in the sixties, the more comfortable politicians from both parties, including Black officials, became with blaming Black communities for the conditions of inequality that existed within them. This tendency bred cynicism and disconnection. Garza writes, “Movements shape us, and we shape them—sometimes consciously, other times unconsciously. My generation was and is still being shaped by the conservative consensus and the right’s rise to power.” The poet Reginald Dwayne Betts has described this generational cohort as the “Bastards of the Reagan Era.”

These conservative politics have hemmed in the horizons of both activists and ordinary people. The Democratic Party’s acquiescence to the narrow world view of the right resulted in progressive movements’ thinking small and organizing in sometimes inconsequential ways. Garza goes to some lengths to describe these phenomena, critiquing efforts to organize safely among the already initiated amid what she describes as throwaway culture, “the willingness to terminate or cancel people from movements for perceived deviations.” Garza assesses the “barriers to becoming the movement we need to be” as being both internal and external. Externally, she identifies “increased repressions, a retrenchment of systemic racism, and increasingly predatory forms of capitalism” as significant barriers to the movement. But these hardly constitute the entirety of what gets in the way. Garza attributes the internal barriers to being “content to be the God of small things.” She elaborates:

We can’t be afraid to establish a base that is larger than the people we feel comfortable with. Movements and bases cannot be cliques of people who already know each other. We have to reach beyond the choir and take seriously the task of organizing the unorganized—the people who don’t already speak the same language, the people who don’t eat, sleep and breathe social justice, the people who have everything at stake and are looking to be less isolated and more connected and who want to win changes in their lives and the lives of the people they love.

It is worth pointing out that this “cancel culture” within the left is not what its right-wing and liberal critics have claimed. Both have created caricatures of the imaginary power of the left to expel, banish, or punish. But the political intolerance that Garza identifies is hardly an expression of power. Instead, in the absence of real power, left-wing organizing and political communities become the one area where people feel some modicum of control.

In a country brimming over with racist hate speech and a pervasive rape culture, it is not a cardinal sin to elevate what is politically and socially permissible within movement spaces. But there is a difference between establishing mutually agreed-upon standards of engagement and respect and reinforcing a culture of exclusivity that results in further marginalization. Garza and other organizers are grappling with how to raise a level of accountability while also opening doors to new people who are not schooled in this kind of political culture. They are asking different kinds of questions, such as “What will it take to expand our ranks and build our movements broadly?” Phillip Agnew, a former surrogate for Bernie Sanders’s Presidential campaign and an organizer with Black Men Build, describes the approach of his organization in the following way: “Come as you are, grow as you go.” That’s not cancel culture, that’s movement culture.