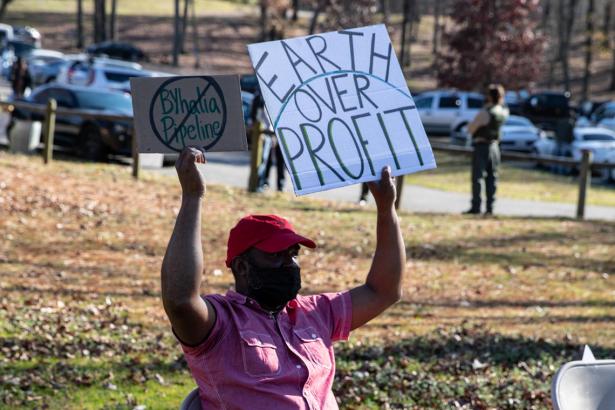 A protester seeks to block the Byhalia Connection Oil Pipeline in southwest Memphis, TN. The pipeline would cut through several Black communities in Memphis and threaten the municipal wellfield that pumps their drinking water., Remember Media/Protect Our Aquifer

After Democrats Raphael Warnock and Jon Ossoff defeated Republican incumbents in the Georgia Senate runoffs, Democrats will control both Congress and the White House for the first time in about 11 years. Once President-elect Joe Biden is inaugurated on Jan. 20, legislators will have a significantly clearer path toward passing bolder environmental and climate policies.

The stakes for the South are particularly great: The region is already seeing high temperatures and more severe weather events due to a changing climate, while reckoning with its long legacy of racial, economic, and environmental injustice.

Southerly spoke to community leaders, lawyers, and advocates throughout the region about what they see as key federal policy priorities that will affect the South, ranging from addressing industrial pollution, to making government processes more transparent, to repairing a broken disaster aid system.

In severely weakening the National Environmental Policy Act, the Trump administration limited public review of federal infrastructure projects like interstates, fossil fuel plants, and pipelines. The rule change creates hard deadlines for completing environmental studies and also allows federal agencies to ignore the impacts of infrastructure projects on climate change. The president announced the changes in Atlanta over the summer, saying that NEPA processes have held up infrastructure projects around the country, including a proposed lane expansion on Interstate 75 in Georgia.

“We’ve seen in our region, in the South, a number of places where that public engagement has led to better projects coming forward,” said Nat Mund, director of federal affairs for the Southern Environmental Law Center and director of its D.C. office. He noted changes to a massive freeway project originally proposed to connect Chattanooga and Asheville, called Corridor K. After decades of review and debate, the North Carolina Department of Transportation recently proposed upgrading existing roads rather than blasting a new route through the mountains. “It’s costing massively less for the taxpayers of North Carolina, Tennessee, and the country, and doing less environmental damage while getting the same benefit,” Mund said. “And that’s because of NEPA.”

However, restoring NEPA to what it was under President Barack Obama isn’t enough, said Monique Harden, assistant director of law and public policy at the Deep South Center for Environmental Justice.

“The process of decision making has to be one that really embraces meaningful and effective participation,” she said. “But the goal has to be changed, right? Because the goal can’t be deferring to polluting companies to make the standard. The goal has got to be what’s needed for healthy communities.”

In 2020, President Donald Trump’s administration finalized a rewrite of the Clean Water Act, limiting what marshes, wetlands, and streams qualify for protection under the law. The altered definition of what constitutes a protected water body effectively removes millions of miles of streams and about half of the country’s wetlands from federal protection, impacting flood risk and drinking water supply, according to a Politico report.

The rollback means industrial projects are already seeing shorter permitting processes. One example is in Georgia, where a company is planning to mine titanium near the Okefenokee Swamp, a National Wildlife Refuge. In October, the U.S. Army Corps of Engineers said there were almost no wetlands or waterways on the potential mine site protected under the federal law, according to WABE.

Mund said the SELC was “hoping that [the company] wouldn’t get their permit to disrupt all of these wetlands because of the impacts. But now, they don’t have to worry about that, from a federal perspective.”

Over last four years, the Trump administration diminished the role of the EPA’s Office of Environmental Justice by proposing deep budget cuts and weakening enforcement. A Democratic House and Senate could have the opportunity to pass legislation like the Environmental Justice For All Act. According to a July press release, the bill, introduced by Vice President-elect Kamala Harris and others in the Senate, aims to “achieve health equity and climate justice for all, particularly underserved communities and communities of color.”

“It’s extremely important to understand the way in which racism is an overlay over all of this environmental work, and how that presents itself dramatically in the South,” said Harden, from the Deep South Center for Environmental Justice. “From Louisiana’s Cancer Alley to the Rust Belt, predominantly African American communities have been devastated by industrial pollution, and are in need of an environmental fix that requires reform of the laws that have made this possible.”

Community members and activists from Appalachia to the Gulf Coast have long pushed for a just transition from the fossil fuel economy. Biden’s “Build Back Better” plan promises to create 250,000 unionized jobs “to clean up local economies from the impacts of resource extraction.” It states he will create a task force specifically for coal and power plant communities, and “direct a front-loaded investment to immediately address the backlog of remediation, reclamation, and restoration needs left behind by the CEOs whose corporations failed to meet their responsibilities to the communities where they operated.”

One example of this work is the RECLAIM Act, which passed the House in July 2020. It would invest $1 billion — funded by fees on mining operations — in projects that reclaim former mine lands, clean up polluted waters, and catalyze economic and community development. Sen. Mitch McConnell (R-KY) has stalled the bill for years.

Communities in Gulf Coast states are working to shape national policy solutions to fit the region’s needs. The Gulf South for a Green New Deal platform — which has been submitted to the House Select Committee on the Climate Crisis — outlines not only a transition away from fossil fuels but also calls for recognizing all Indigenous tribes of the Gulf South as sovereign nations, combating climate gentrification, and prioritizing sustainable fisheries, among other demands.

President-elect Biden has already pledged to rejoin the Paris climate accord on his first day in office, re-committing the U.S. to curbing global warming by the end of the century. Communities in the South are already bearing the brunt: In the U.S., the five warmest years on record have all occurred since 2012. Last year tied with 2016 as the hottest year on record globally, fueling droughts and wildfires. Higher temperatures mean a greater reliance on air conditioning, which means more money for Southern utilities. Research shows Southeastern states spend the most money on electricity.

The region is still very much wedded to fossil fuels; most states lack renewable portfolio standards or goals. Major natural gas projects have been stalled or canceled, solar energy is growing rapidly in states like Florida, and offshore wind projects are being built, but it’s not enough. Many renewable experts say subsidies and regulations are necessary. Harden hopes to see change stem from national policy. “Being able to get a federal standard would be extremely important in terms of supporting and incentivizing Southern states to be able to participate and get involved in bringing energy innovation, solutions like renewable energy and energy efficiency,” she said. A transition to renewables would “really better the lives of people,” from lowering electric bills to lessening pollution from burning fossil fuels.

Congress could consider a sweeping bill aimed to address historic discrimintation against Black farmers, largely in the South. Sen. Cory Booker of New Jersey plans to reintroduce the Justice for Black Farmers Act, which would create a civil rights oversight board to review the U.S. Department of Agriculture, provide land grants, establish training programs, and give funding to historically Black colleges and universities to expand agricultural research.

Congress could enact tougher regulations on PFAS, often called “forever chemicals,” which are linked to cancer and found in everything from cookware to raincoats. As the EPA recently considered a strict ban on imports of products containing PFAS, the White House interfered, according to The Hill. Michael Regan, Biden’s pick for EPA head, has been criticized by North Carolina environmental groups for not doing enough to regulate PFAS contamination as the state’s secretary of the environment.

David LaCerte, the newly appointed senior advisor to the U.S. Chemical Safety Board, told Southerly that an active hurricane season in his home state of Louisiana, coupled with our recent investigation with WWNO/WRKF, emphasized the need to adopt safety measures to prevent more toxic releases or chemical explosions at facilities after hurricanes.

Egland, from the NAACP, also hopes to see stricter policies around biomass manufacturing, particularly for wood pellet plants that pollute communities across the South. Championed as a renewable alternative to coal in Europe, the wood pellet industry has driven further clear cutting of biodiverse forests in the South and has increased air pollution in predominantly Black communities in North Carolina.

Harden, from the Deep South Center for Environmental Justice, hopes pollution regulations will tighten across the board. “It seems to me that all efforts need to be focused on legislative reform around our pollution standards that allow not only greenhouse gas emissions that are warming our planet, but for decades and decades [allowed] millions and millions and millions of pounds of toxic chemicals that are harming the health of African Americans and other people of color,” she said.

In 2020, there were 22 natural disasters with losses over $1 billion each, shattering previous records. Many of these events were concentrated in the South, from tornadoes in Tennessee and Mississippi to a relentless hurricane season on the coast. When an area undergoes such a disaster and receives a federal disaster declaration, residents can apply for recovery funding from the Federal Emergency Management Agency. But many people can’t prove where they live because they lack a formal title to their home, making it much more difficult to receive aid. Lawmakers could re-introduce the Housing Survivors of Major Disasters Act, which would expand the types of documentation used to prove owner-occupancy, including pay stubs and medical records.

FEMA is also considering changing the criteria for what events receive such a disaster declaration. Samantha Montano, an assistant professor of emergency management at Massachusetts Maritime Academy, said the proposed change — which is currently up for public comment — would start taking into account the wealth of different states before declaring a disaster. “So in the South, for example, Texas, a wealthier state, would have to show higher levels of damage for an event to qualify for public assistance, as compared to a state like Mississippi or Alabama,” she said.

Biden has yet to announce his pick to lead FEMA. Montano hopes to see the agency removed from the Department of Homeland Security and restored to its pre-9/11 independent, cabinet-level status. “This is something that folks in emergency management have been calling for since DHS was created,” Montano said.

[Carly Berlin is Southerly’s Gulf Coast correspondent. Southerly is an independent, non-profit 501(c)3 media organization that covers the intersection of ecology, justice, and culture in the American South.]