After Trump, Coronavirus Could Deliver the Final Blow to Neoliberalism 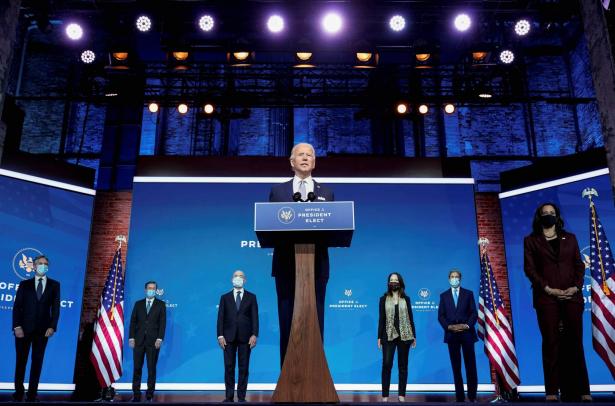 A return to normalcy, REUTERS

With a Democrat in the White House, there is a surge of hope about what the new incumbent will do to address some of the burning problems facing the United States and the world. At home, there's a rampant pandemic killing thousands daily, extreme inequality and poverty, decaying infrastructure, racism and extremism. Abroad, a climate emergency, a global refugee crisis and growing authoritarianism.

President Joe Biden represents the liberal hope of a return to so-called normalcy, symbolised by the choreographed endorsement of Donald Trump’s predecessors, as Barack Obama, George W Bush (his Iraq war crimes now forgiven) and Bill Clinton each intoned on the miracle of the peaceful transition.

The message is clear: the four-year nightmare is over; a moderate administration will bring some order and relief to millions who have been abandoned amid the pandemic and consequent job losses, and a more concerted effort to tackle the virus is coming.

But beyond the glitzy inauguration, with its array of stars and the sentiment aroused by having a “normal guy” in the White House and the first Black woman as vice president, lies the bigger question of how US society’s most pressing ills can be tackled under existing political conditions.

A decade ago, during the uprisings of 2011, from Cairo’s Tahrir Square to New York’s Occupy Wall Street, the late anarchist thinker David Graeber was credited with coining the phrase “We are the 99 percent”, which crystallised the demands of the protesters against the plunder of the wealthy one percent. This neat slogan shifted the idea of class struggle from its 20th-century moorings to a 21st-century division that seemed a more accurate portrayal of reality, with middle-class incomes stagnating as the rich headed into the stratosphere.

And yet, by 2021, inequality has increased, with tech tycoons soaring to new heights of wealth and the hopes of 2011 for more democracy and social justice around the world dashed.

In his 2017 book The Great Leveler, Stanford historian Walter Scheidel argued that throughout history, economic inequality has only been reversed by one of the “Four Horsemen of Leveling”: warfare, revolution, state collapse or plague.

When the Economist interviewed Scheidel in 2018, he explained: “The greater the shock to the system, the easier it becomes to reduce privilege at the top.”

The reason that western welfare states and public services were expanded so decisively in the mid-20th century was because of two world wars and the rise of communism; such measures “were taken in the unique context of massive violent shocks and threats”, forcing the powers-that-be to take drastic remedial action.

This is why reducing inequality in our current world order seems so intractable. “As long as the capitalist world system is in place, it is hard to see how even huge productivity gains from greater automation would benefit society evenly instead of funnelling even more income and wealth to those who are in the best position to pocket these gains,” Scheidel noted.

The link between cataclysms and the struggle for equality is writ large through recent centuries of conflict and revolution.

In the Seven Years War during the mid-1700s, American colonists fought alongside British officers against French colonialists and their Native American allies along the northwest frontier of the settler colony. They paid a heavy price in lives and in the economic devastation wrought by the war, creating a well of resentment among the colonists - including future President George Washington - towards their British rulers. This first global inter-imperialist conflict of the modern era laid the groundwork for the revolutions of the late 18th century, the American War of Independence and the French Revolution.

By 1815, when Napoleon was finally defeated, the revolutionary wars had fatally undermined the Spanish and French empires, giving rise to the Haitian revolution against slavery (1791-1804) and the independence revolutions of Mexico and Latin America in the early 1800s.

A century later, a similar process unfolded in the wake of the First World War. The Russian Revolution was sparked by the catastrophe of Tsar Nicholas II’s military campaign and Russian state collapse, while Germany’s imperial monarchy, the Ottoman and Austrian empires also disintegrated after the war. This was a bonfire of the feudal order of Eurasia. (China’s Qing dynasty had collapsed in 1911 in the wake of nearly a century of western imperialist depredations, starting with the devastating Opium Wars.)

War - most particularly total war - is the midwife of revolution, but even where revolution is absent, it brings forth collective action by the state which in peacetime would be unthinkable, as seen in Britain and the US in the 1940s.

War also clears the decks by a process of military mobilisation, which gives rise to unheard-of opportunities for oppressed minorities, such as Black Americans who fought in the Second World War, and women in the world wars who manned the factories and hospitals in support of the war effort, winning the franchise in its wake.

The greatest equalisation of all emerged from the ashes of the most violent global conflict, the Second World War. The defeat of fascist militarism and nazism, most decisively at the edge of the Russian steppe in the Battle of Stalingrad in the winter of 1942-43, marked a critical moment in the 20th century, out of which communism, socialism and national liberation became the dominant political and ideological forces shaping societies from Beijing to Delhi and Algiers to Havana.

As economic historian Thomas Piketty has shown in his long-form data analysis of wealth and income inequality, the compression of inequality has closely mirrored the major conflicts of the 20th century, continuing until around 1970, when inequality began to grow again.

As Scheidel wrote in his book: “Across recorded history, the periodic compressions of inequality brought about by mass mobilisation warfare, transformative revolution, state failure, and pandemics have invariably dwarfed any known instances of equalization by entirely peaceful means.”

The role of war as the midwife of reform and spreading wealth and opportunity is inescapable - and a shadow over all progressive hopes for change in our lifetime.

The baby boomers that millennials now berate for their selfishness in accruing all the benefits of cheap housing, full employment and social mobility - now denied to their children and grandchildren - were indeed the beneficiaries of the bloodletting and sacrifice of their own parents and grandparents in the world wars and revolutions of the first half of the 20th century.

This brings us to the fourth horseman of the apocalypse identified by Scheidel as one of the harbingers of social levelling: plague. The Covid-19 pandemic has shaken up politics and economics, and its impact is only just beginning to show itself.

Firstly, and most obviously, the pandemic felled Trump’s chance of re-election, and all that would have followed from it. Recall that at the beginning of 2020, the US economy was booming, employment was high, the stock market was on steroids and the road to re-election was clear for the incumbent.

His hubris in face of the pandemic saw the country descend into crisis. Black Lives Matter uprisings swept the US through the summer, and a brutal second wave of the virus inconveniently got underway during the final weeks of the election campaign. Trump left office with 400,000 deaths from Covid-19 as his legacy, and the biggest drop in life expectancy for average Americans in a century.

But beyond the defeat of Trump, the pandemic has exposed the weaknesses and injustices of the western neoliberal model like nothing else in the 40 years since it was ushered in by former UK Prime Minister Margaret Thatcher and former US President Ronald Reagan as a broom sweeping away the social-democratic postwar order.

The virus has turned the orthodoxies of our pro-market ruling parties on their heads, with a British Conservative chancellor paying the wages of millions of workers from state credit, thousands of homeless people being taken off the streets and placed in hotels and free marketers forced to declare poverty their new worst enemy after years of saying it was the fault of the poor, in U-turn after embarrassing U-turn.

t is too early to say whether the pandemic, which is now at its peak and very far from being over, will act as the catalyst of change that war and revolution were in the last century. We can say that the virus has finally shattered the myth of scarcity of resources in modern post-industrial society, with the state asset purchases that were used to save the banks in 2008 now being deployed on a scale never before seen to save the livelihoods of millions and to bail out businesses large and small. The magic money tree is here to stay, and a universal income is surely coming.

Further, the pandemic has exposed the fundamental failings of a public health system based on private profit as incapable of dealing with a health emergency at its source by suppressing the virus (in Asia and Africa, a more collectivist approach to public health, less encumbered by myths of exceptionalist “freedom”, was better equipped to galvanise society to bring the virus under control).

As Felipe Araujo wrote in Foreign Policy: “Places we tend to hear about only when there’s a natural disaster or some kind of political unrest - Mozambique, Senegal, Rwanda, Malaysia, Vietnam - have been giving other nations a masterclass on how to act during a global pandemic. The lesson: communitarian societies have the social capital and mutual support to allow curfews, self-isolation, quarantining and social distancing to work, even among the poorest.”

With Covid-19 vaccines now being deployed, there is an understandable yearning to go back to the dysfunctional normal of 2019, or 2016 - but this is a pipe dream. Black swans, climate chaos, upheavals and revolutions could be the new normal for a while yet. After the Biden honeymoon fades, the struggle for a social order that prizes equality and public health instead of private riches will likely ride in on the backs of Schiedel’s horsemen.

The views expressed in this article belong to the author and do not necessarily reflect the editorial policy of Middle East Eye.

Joe Gill
Joe Gill has lived and worked as a journalist in London, Oman, Venezuela and the US, for newspapers including Financial Times, Morning Star and Middle East Eye. His Masters was in Politics of the World Economy at the London School of Economics. Twitter @gill_joe