Chávez and the UFW exposed a paradox that still affects most farmworkers. No matter how hard they work, most will never achieve the so-called American Dream as they are bound to a system of agricultural production that thrives on labor exploitation. 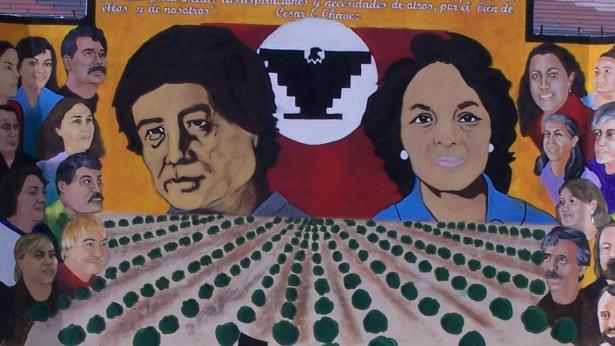 A memorial to César Chávez in San Juan, Texas,

Across the United States and the world, many people are applauding President Joe Biden’s decision to place a bust of César E. Chávez in the Oval Office on Inauguration Day. This symbol of the farmworkers’ struggle for economic democracy in the headquarters of U.S. political power inspires hope that the next four years can lead to real change.

Chávez showed his care for humanity and commitment to nonviolent struggle as the leader of the United Farm Workers, or UFW, from the 1960s until his passing in 1993. This period under his leadership continues to be one of the most successful eras in the farmworker labor movement.

César Estrada Chávez is one of the most recognized U.S. Latino figures of all time. The Postal Service put him on a stamp in 2003; the U.S. Navy named a ship after him; schools and streets bear his name in cities and towns across the country; and states have passed holidays in his honor. In union halls, schools, community centers, colleges, and universities, people observe his March 31 birthday every year.

Chávez was a proud member of the working class and a devout Catholic with deep family roots in what is now the U.S. Southwest. He was married to his wife Helen, also an activist in the movement, for forty-five years; the couple had eight children. Chávez, a military veteran, served in the U.S. Navy. These traits, in themselves, are admirable and worthy of recognition.

But today, we mostly honor Chávez’s relentless, visionary work as a labor organizer who led tens of thousands of farmworkers under the UFW flag in collective direct action to demand dignity and respect from elite growers in California’s Central Valley. This act of sustained class struggle captured the attention of millions, who subsequently engaged in solidarity work.

Together, the UFW and its supporters forced the growers to recognize the union. The famous chant of “Sí Se Puede!”—Yes, We Can!—refers to winning union recognition and contracts, even when farmworkers did not have any legal rights or protections to do so.

Despite the industrialization of farming, manual laborers continue to be vital for agricultural production. The agriculture industry is as dependent on farmworkers today as it was during the height of Chávez’s movement nearly sixty years ago.

Chávez and the UFW exposed a paradox that still affects most farmworkers. No matter how hard they work, most will never achieve the so-called American Dream as they are bound to a system of agricultural production that thrives on labor exploitation. Farmworkers will continue to work until their bodies will no longer allow them to do so.

Workers know this, and bosses, politicians, pundits, academics, and many progressive thinkers know it, too. But few are willing to engage in the kind of sustained action that Chávez and the UFW modeled for us.

So let’s honor Chávez and the UFW by passing new national legislation such as the Fairness for Farm Workers Act introduced in 2019 (which went nowhere in the last Congress but is expected to be reintroduced) that grants farm workers the same federal labor rights and federal protections as all other private-sector employees. That would be a more fitting tribute to this great man and his legacy than simply placing a statue on a shelf.

Armando Ibarra is an associate professor at the School for Workers at the University of Wisconsin-Madison. He is also the lead author of The Latino Question, 2019 Best Book in Latino Politics.