Forgotten for Over a Century, Border Hero Jovita Idár Is Rediscovered by Her Hometown of Laredo

Jovita Idár, born in Laredo in 1885, has only recently begun to gain proper recognition as a pivotal figure in Texas and transborder history. 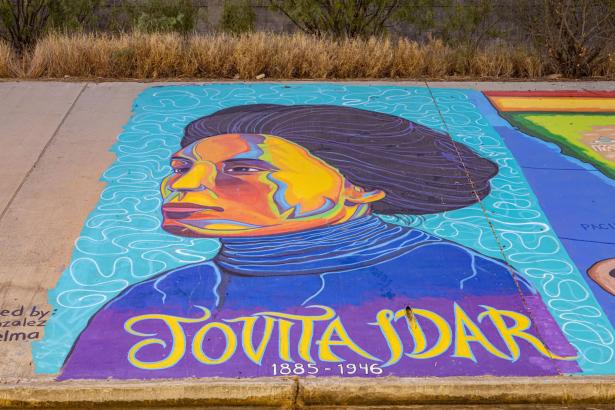 In October, the Laredo City Council rechristened a park in Idár’s name with a mural, plaque, and walking trail., JESÚS M. GARCIA

In 1914, the Texas Rangers had a reputation for complicity in extralegal violence and property crimes against Hispanic Texans. So when they rode up to the office of El Progreso newspaper in Laredo one day with a score to settle, the wisest choice of action might have been to flee and let them have the printing press. Instead, 29-year-old Jovita Idár dared the Rangers to come and take it. Idár, a crusading journalist, guarded her paper’s press with her own body, forcing the Rangers to either assault an unarmed woman or come back at a more auspicious time. The Rangers stood down. 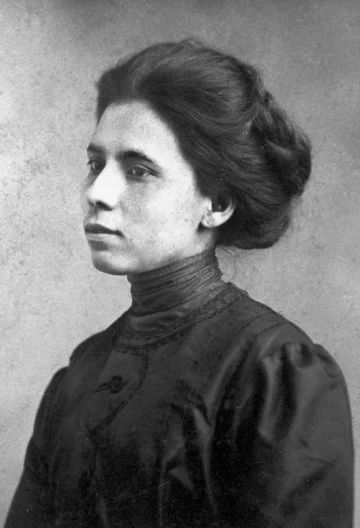 This Idár anecdote is one of many from a life of daring exploits, like crossing the border to join the Constitutionalist forces of the Mexican Revolution as a nurse and writing uncompromisingly in defense of equity and civil rights for Hispanics and women in the United States. Yet Idár, born in Laredo in 1885, has only recently begun to gain proper recognition as a pivotal figure in Texas and transborder history. After decades in near-total obscurity, Idár has burst into the public eye over the past year. She’s the subject of a PBS American Masters documentary, which came out in August. That same month, the New York Times published her obituary via its “Overlooked” series, 74 years after her death. Most recently, in a socially distanced ceremony on a sunny day in October, the Laredo City Council rechristened a park in Idár’s name with a mural, plaque, and walking trail educating residents about her life and the context of her struggle for civil rights and justice on the Texas-Mexico border.

For Laredoans, the rediscovery of a hometown hero like Idár comes as a welcome surprise. “If you’re from Laredo, a lot of time you think that your community is not central to U.S. history or Mexican history,” says Gabriela González, a professor of history at the University of Texas at San Antonio. “Even though it has grown significantly, it still has that small-town feel to it. It’s predominantly Mexican American. When you’re from Laredo and you find out somebody from Laredo did something interesting and amazing, yeah, it can floor people.”

González speaks from experience: She grew up in Laredo, and she is largely responsible for the recent groundswell of interest in Idár. González never learned about Idár in her youth—neither in Laredo schools nor through word-of-mouth or public commemoration. She first encountered the name during her graduate studies at Stanford University, on a research trip to Texas Woman’s University in Denton, where she found a “very slim file” on Idár. González stresses that she is not the first historian to write about Idár—she gives that credit to University of Texas at Austin Professor Emeritus José Limón—but her research and writing have played a key role in popularizing Idár’s story. 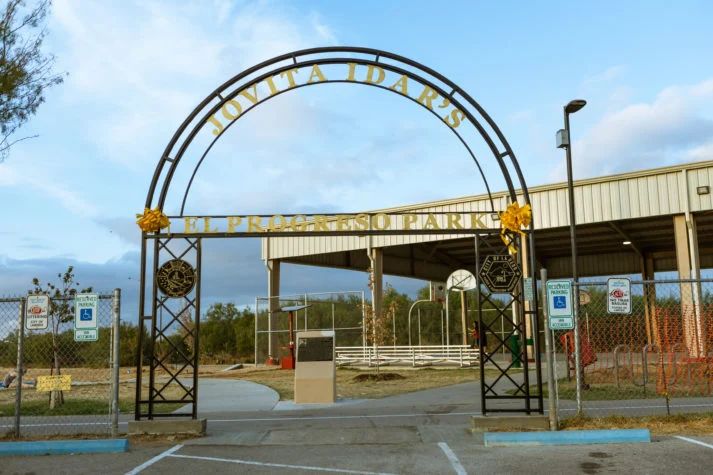 El Progreso Park is named after the paper Jovita Idár defended against the Texas Rangers and honors both the paper and Idár.  JESÚS M. GARCIA

Idár’s reemergence in August came as America celebrated the 100th anniversary of the Nineteenth Amendment to the U.S. Constitution, which protects a woman’s right to vote. Idár wrote in favor of women’s suffrage, but that is far from her only claim to fame. Idár and her newspaper-owning family were deeply involved in drawing public attention to discrimination and violence aimed at Mexican Americans in the border region in the first decades of the 20th century, as well as supporting organized labor and access to education. When her father, Nicasio Idár, founded the First Mexican Congress, an early attempt to organize border-area Tejanos in the struggle for civil rights and justice, she founded an offshoot organization, the League of Mexican Women, focused on educational equity.

And, yes, perhaps most dramatically, Idár risked her life to stand up for press freedom and against the Texas Rangers when they took issue with a column in El Progreso, which criticized U.S. foreign policy in Mexico. “Jovita was on the newspaper’s staff at the time, and the intrepid writer stood before the Rangers in defiance, daring them to knock her down,” González writes in her 2018 book, Redeeming La Raza: Transborder Modernity, Race, Respectability, and Rights. “The Rangers backed down, but they returned early the next morning to destroy the building and equipment and arrest the workers.”

In recent years, conversations about who deserves to be honored in public statuary or by having places named after them have led to protests, violence, and toppled monuments, as well as thousands of newspaper editorials and school board and local government meetings, across the nation. Laredo itself is ripe for this sort of reconsideration, given its annual monthlong celebration of George and Martha Washington with balls and pageantry every February and relative lack of celebration of local and Hispanic historical figures. So far, no one has erected a statue of Jovita Idár standing her ground against the Texas Rangers, but the newly christened public space in North Laredo, now named Jovita Idár “El Progreso” Park—honoring both the hero and her ransacked newspaper—is perhaps an equivalent gesture. The new mural on-site, by artist Abel González, depicts, among other scenes from Idár’s life, a female silhouette blocking a doorway as three armed men approach.

Nelly Vielma, the Laredo city councilperson who spearheaded the effort to rename the park, sees the mural and walking trail as an opportunity for public education, particularly during the pandemic, when students are out of school and public parks are full of families. She says that ever since the muralist began his work, people have been coming up to him and asking about Idár, excited to learn about her story.

“I think that one should always be cautious with who we name public places after,” Vielma says. “For me, Jovita was the perfect person that’s a role model for kids to look up to and for people to inquire and read about. My hope is that the next generation will see in Jovita’s example that they can follow in her footsteps, and that they can be that voice that activates our community.”

Vielma learned about Idár through a viral video that she saw on Facebook in 2018, which was likely informed by González’s research. A former fourth- and fifth-grade teacher, Vielma says she wishes she’d known about Idár earlier so she could have used her story in the classroom.

González’s writing on Idár is not mere hagiography. It deals subtly with themes like the virtues and limits of middle-class respectability politics as a strategy for Hispanics to attain status and rights in prejudiced Texas. González is now at work on a full-length biography of Idár. “The fact she’s been getting all this attention and people are hungry for her story just encourages me more that there is a demand,” González says.

González predicts that Idár will be due for more public recognition in the coming years, based on the feedback she’s seen on social media. “People always chime in,” she says. “A lot of Hispanic folks are upset that there are no schools named after her, and they get really angry. A lot of people are upset that they didn’t learn about Jovita Idár in school. It’s almost like they feel they were cheated somehow.”

Vielma has one hypothesis about why Idár’s story was neglected for so long, even in her own hometown. “My only thought is because she was a woman,” she says. “I was reading a book about Laredo history and I was thinking, ‘I don’t see Jovita at all! What happened here?’ I think that because she was a woman and she didn’t toot her own horn, she was forgotten. But we’re shining her up now.”

Michael Agresta, an Austin resident, has written for Slate, the Atlantic and the Wall Street Journal.

Do you think free access to journalism like this is important? The Texas Observer is known for its fiercely independent, uncompromising work—which we are pleased to provide to the public at no charge in this space. That means we rely on the generosity of our readers who believe that this work is important. You can chip in for as little as 99 cents a month. If you believe in this mission, we need your help.