If what's impeachable is only what members of Congress say it is, constituents should insist that egregiously narrow definitions must no longer prevail. 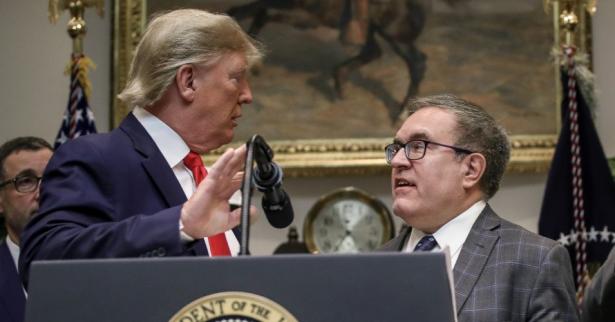 Impeachment dramas on Capitol Hill have routinely skipped over a question that we should be willing to ask even if Congress won't: "What about a president's unimpeachable offenses?"

The question is the flip side of one that Republican Gerald Ford candidly addressed when he was the House minority leader 50 years ago: "What, then, is an impeachable offense? The only honest answer is that an impeachable offense is whatever a majority of the House of Representatives considers it to be at a given moment in history."

So, when the House approved two articles of impeachment on Donald Trump in December 2019 and one impeachment article last month, the actions were much too late and much too little.

On Feb. 6, 2017, less than three weeks into Trump's term, I wrote in The Hill newspaper: "From the outset of his presidency, Trump has been violating the U.S. Constitution in a way that we have not seen before and should not tolerate. It's time for members of Congress to get the impeachment process underway." I pointed out that "the president continues to violate two 'emoluments' clauses in the Constitution. One prohibits any gifts or benefits from foreign governments, and the other prohibits the same from the U.S. government or any U.S. state."

But, at the outset, treating President Trump as unimpeachable—despite those flagrant violations of the Constitution—greased the wheels for the runaway madness of his presidency in the years that followed. As Trump's destructive joyride went on, reasons to impeach him proliferated. Researchers easily drew up dozens of articles of impeachment. But in the eyes of political elites, as with previous presidents, Trump's offenses were seen as unimpeachable.

Two decades earlier, President Bill Clinton became the second impeached president in U.S. history. The frenzy was akin to vilifying Al Capone for tax evasion. "We all seem to have lost our sense of proportion," historian Howard Zinn wrote five weeks before Clinton's impeachment. "Why are the political leaders of the United States and the major media talking of impeaching Bill Clinton for lies about sex, surely not the most important sins of his administration?"

Writing in November 1998, Zinn added: "If Clinton is to be impeached, why do it for frivolous reasons? I can think of at least 10 reasons to impeach him, for acts far more serious than his dalliance with Monica Lewinsky or his lies to Kenneth Starr. I am speaking of matters of life and death for large numbers of people."

Zinn cited such matters as missile attacks on Iraq, Afghanistan and Sudan; Clinton's refusal to accept a Canadian proposal to ban land mines; continuation of "embargoes on Cuba and Iraq, causing widespread misery in Cuba for lack of food and medicine, and hundreds of thousands of deaths in Iraq according to U.N. statistics"; and squandering vast funds on the U.S. military while people were suffering and dying at home and abroad due to lack of health care, nutrition and housing.

There was no second impeachment of Clinton after he used a "diplomatic" scam called the Rambouillet accords to justify launching intensive U.S.-led NATO bombing of Yugoslavia in the spring of 1999, without congressional authorization. Clinton persisted with a continuous air war for more than two months—making history by blatantly violating the War Powers Resolution.

Trump—like Barack Obama and George W. Bush before him—was able to order missile strikes and deploy troops in numerous war-torn countries without congressional constraints. And there was no reason to be concerned that Congress might impeach him for war crimes. The reasons for such impunity are rooted in the history of "unimpeachable" offenses.

Consider the proceedings in Congress that forced President Richard Nixon to resign when impeachment was imminent in mid-1974. The House Judiciary Committee approved three articles of impeachment—focusing on Nixon's obstruction of justice after the Watergate break-in by operatives for his re-election campaign, misuse of federal agencies to violate citizens' constitutional rights, and noncompliance with congressional subpoenas.

Unmentioned in the Nixon impeachment articles: the Vietnam War that he had prolonged with a vengeance while claiming to seek peace. With methodical deception, Nixon inflicted a massive horrendous war—but his crimes against humanity were judged to be completely unimpeachable.

Also entirely excluded from the Nixon impeachment articles was the merciless U.S. bombardment of northern Laos that slaughtered people who lived on the Plain of Jars, making Laos "the most heavily bombed country per capita in history." The impeachment articles likewise made no mention of Nixon's ordering of the secret and illegal carpet-bombing of Cambodia, which began two months into his presidency and persisted year after year.

On July 31, 1973—nearly a full year before Nixon's resignation—Democratic Rep. Robert Drinan introduced an impeachment resolution. He said it was triggered by the "recent revelation that President Nixon conducted a totally secret air war in Cambodia."

As journalist Judith Coburn noted, "The secret bombing of Cambodia involved the same abuse of power and political manipulation of government agencies as Watergate, but only a few congressional representatives like John Conyers, Elizabeth Holtzman, and Edward Mezvinsky supported Drinan's Cambodia article, which was soundly defeated by the House impeachment committee 26-12."

Gerald Ford's "only honest answer"—acknowledging that an impeachable offense is only "whatever a majority of the House of Representatives considers it to be at a given moment in history"—foreshadowed the impeachment proceedings against Nixon, Clinton and Trump.

If what's impeachable is only what members of Congress say it is, constituents should insist that egregiously narrow definitions must no longer prevail. Otherwise, the operative standard for presidents will continue to be what they can get away with—in tandem with a collectively feckless Congress.

For now, the presidential offenses that are routinely considered unimpeachable—and therefore ultimately acceptable—tell us a lot about Congress. And about U.S. mass media. And maybe about ourselves.