The lawsuit claims that the former president and his personal lawyer violated the Ku Klux Klan Act by conspiring with white supremacist groups to incite the insurrection. 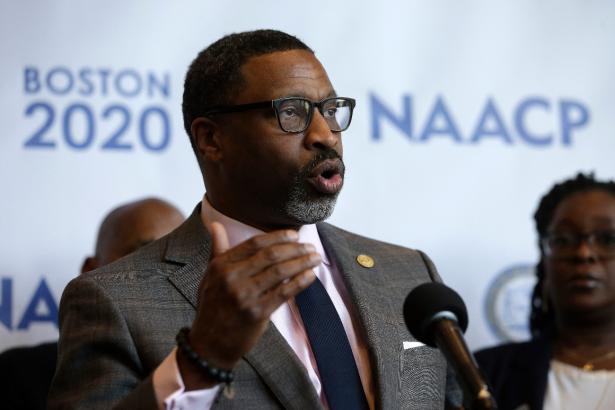 On the heels of the Senate's acquittal of Donald Trump, the NAACP, Mississippi Rep. Bennie Thompson and civil rights law firm Cohen Milstein Sellers & Toll filed a lawsuit against the former president, Rudy Giuliani and two white supremacist groups, citing their role in the Jan. 6 insurrection.

The lawsuit, filed Tuesday morning in Federal District Court for the District of Columbia, alleges that Trump and Giuliani, in collaboration with the Proud Boys and Oath Keepers, conspired to incite the riots to keep Congress from certifying the results of the 2020 presidential election. It claims they did so in violation of the Ku Klux Klan Act, a Reconstruction-era statute designed to protect both formerly enslaved African Americans and lawmakers in Congress from white supremacist violence.

Reps. Hank Johnson and Bonnie Watson Coleman will join the litigation as plaintiffs in the coming days, according to a press release shared with POLITICO.

The lawsuit recounts Trump’s actions leading up to the Jan. 6 riots, building a case against him in similar fashion to House impeachment managers. It cites Trump's remarks during “Save America” rally as evidence that he mobilized and directed insurrectionists to storm the Capitol. After his supporters entered the halls of Congress, the lawsuit alleges, Giuliani called lawmakers individually, asking them to try to “slow down” the Electoral College vote count.

The parties’ decision to file litigation after the impeachment trial is in large part a response to the Senate’s acquittal of the former president on Feb. 13 — so far, no other civil rights groups have pursued litigation against Trump for his role in the riots. Filing suit now, Thompson and the NAACP argue, will help prevent a second insurrection.

“If we don't put a check on the spread of domestic terrorism, it will consume this nation and transform it to something that none of us recognize,” NAACP President Derrick Johnson said in an interview. “We must, as a nation, prevent the spread of this type of boldness where [insurrectionists] will go to our U.S. Capitol and seek an act of treason.”

Over the past several months the NAACP has placed voter protection and prevention of domestic terrorism at the center of its work. Johnson added that he sees the lawsuit as an aggressive push against domestic terrorism, which he said poses a direct threat to communities of color.

Trump and his legal team have defended his remarks on the Ellipse as protected speech under the First Amendment. In their impeachment defense, they claimed that the former president called for peace in his remarks before asking his supporters to leave the Capitol when the insurrection reached its apex. Trump spokesman Jason Miller echoed these arguments Tuesday.

“President Trump has been acquitted in the Democrats’ latest Impeachment Witch Hunt, and the facts are irrefutable," he said in a statement. "President Trump did not plan, produce or organize the Jan. 6 rally on the Ellipse. President Trump did not incite or conspire to incite any violence at the Capitol on Jan. 6. Speaker Nancy Pelosi and Washington, D.C., Mayor Muriel Bowser must answer questions as to why they rejected additional security and National Guard assistance in the run-up to Jan. 6.”

Still, this lawsuit leaves Trump and his allies vulnerable to new charges by alleging that they not only called for violence on Jan. 6 but played a role in planning and executing the insurrection.

The plaintiffs also point to Senate Majority Leader Mitch McConnell’s remarks after Trump’s acquittal, in which they claim he encouraged litigation against the former president, saying he was still vulnerable to legal action for his actions while in office.

And they plan to underline the fact that Republicans had an opportunity to pursue that litigation themselves.

“While the majority of Republicans in the Senate abdicated their responsibility to hold the President accountable, we must hold him accountable for the insurrection that he so blatantly planned,” Thompson said in a statement. “Failure to do so will only invite this type of authoritarianism for the anti-democratic forces on the far right that are so intent on destroying our country.”

Josh Gerstein contributed to this report.