AN INTERVIEW WITH JASON RAMIREZ Few industries in the United States expose workers to COVID-19 at higher rates than the meatpacking and food processing sector. We spoke with a worker at a Tyson poultry plant in Arkansas about his fear of getting sick 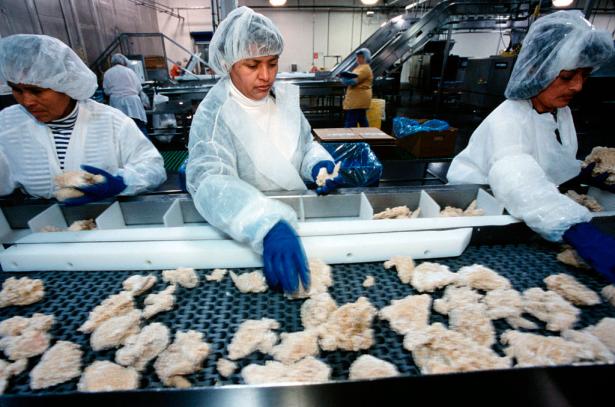 The Food Chain Workers Alliance (FCWA), a coalition of worker-based organizations from across the supply chain, have released a report on working conditions throughout the pandemic. Titled “We Are Not Disposable,” the report outlines how COVID-19 has affected the hundreds of thousands of workers in these industries, as well as how these workers have organized to protect themselves.

The picture the report paints of food processing work is dire. While the US Department of Agriculture has now withdrawn a proposed rule that would have allowed some poultry plants to increase their line speed, problems remain. Poor ventilation, for instance, is still an issue. As the New York Times reports, scientists are urging the Center for Disease Control and Prevention (CDC) to set air standards for workplaces. As one scientist, an epidemiologist, told the Times, food processing plants’ “refrigerated environment and the lack of fresh air are ideal conditions for the virus to thrive. But the industry has not put in safety measures to minimize the risk.” This is all in addition to the recent nitrogen leak at a Georgia poultry plant, which killed six workers.

Members of Venceremos, an FCWA member, say that social distancing is impossible inside the facilities, and that they feel unsafe. As Venceremos director Magaly Licolli puts it, “Organizing poultry workers has always been challenging, but with this pandemic it’s been about fighting or dying. There is no other option.”

One person quoted in the FCWA report works at a Tyson Foods poultry processing plant in Arkansas. In 2020, Tyson, one of the world’s largest poultry producers, reported its highest revenue in five years. It is also the company whose managers at one plant placed bets on how many workers would contract COVID-19. At its annual shareholder meeting earlier this month, the company rejected a due diligence proposal to investigate possible unsafe working conditions.

Jacobin’s Alex N. Press spoke with the Arkansas-based Tyson worker, Jason Ramirez, a pseudonym we have granted them for the sake of being able to speak freely and to protect against possible retaliation, about the past year at the poultry processing plant.

What has it been like to work at the Tyson plant during the pandemic?

All my coworkers, including myself, are afraid to go to work, because the majority of the people who I work with are older, so they have higher risk for contracting COVID-19. They’re at higher risk of getting sick and not being able to recover. It’s been very difficult to work because the workload keeps increasing. It doesn’t matter how many people are in the plant, we still have to keep up with the quota. There is not enough protection, and there are many infections right now.

There have been a lot of COVID-19 cases in the poultry processing industry and a lot of workers have died. What has Tyson done to protect workers, and what should it do that it isn’t doing?

The only thing Tyson did to protect workers was provide hand sanitizer and masks, but it was already very late by the time they provided that. The other things they say they’ve implemented are not really protections. Plus, we don’t receive hazard pay, or more bonuses. The salary is the same as it used to be. We don’t get paid if we get infected and then have to quarantine; or rather, it’s very difficult to get paid if that happens and many people haven’t gotten paid. There’s very little compensation. They gave face shields to some workers — probably like seven workers in one department — but not everyone got them.

One very important thing Tyson should do is quarantine workers who have been exposed to the virus. They’re currently allowing workers to keep working until their COVID-19 results come back positive, which means they infect other workers in the meantime. And workers need to be paid during that quarantine time. They should also be doing contact tracing.

How much do you make at the plant, and have you ever received any hazard pay?

I make $14 an hour. Every year there is an increase but it wasn’t a larger raise this year or anything. I haven’t received any other increase besides that one, which was thirty cents more [per hour]. Last year, they offered $500 in bonuses in May of 2020 but not everyone qualified to get that bonus.

What is it like to work in an industry with such high rates of COVID-19 among the workforce while so many people talk about the importance of “essential workers” and about keeping such workers safe? How do you feel about how Tyson treats you and your coworkers?

I don’t understand why we’re called “essential workers.” Really, for the company, we’re more like “essential machines.” Tyson believes we’re expendable and disposable. If we don’t work like a machine, we can be disposed of by the company as if nothing happened. I think “essential workers” is meant to mislead people; it is not how we feel. For example, we’ve received Christmas dinner. This year, we didn’t even receive that to thank us for our work. All the company cares about is production.

Also, there is a lot of racism at the plant. For example, I’ve been at this particular plant for three years, and in that time I’ve seen seven white people come to work in production and after six months, they become supervisors. That’s because the managers, who are also white, help them get out of these production jobs. There are Hispanic people who have worked at the plant for twenty or twenty-five years and the most they can get is to become a “leader” even though they know more than the supervisors who just began working there. We don’t get as many opportunities as the white people.

What led you to start speaking up about your workplace conditions, and how did you get involved with Venceremos?

I got involved with Venceremos through my wife. She works at a different plant, and she was the one who told me about the organization and that it was fighting for poultry workers. I was determined to fight for poultry workers. Before that, I’d always liked fighting against abuse. I never like seeing people humiliated. So I’ve been gathering evidence of what’s happening inside the plant. When I met Venceremos, I liked the way that Magaly [Licolli, the director of Venceremos] organized and the way that she explained what we could do.

I speak a lot with the media, but I’ve also been organizing with my coworkers and compiling information on the company itself. If I need to, I collect evidence inside the plant. I do a lot to bring my coworkers into the organizing process.

I also collected signatures for a worker petition. We wrote down our demands: hazard pay, paid quarantine, paid sick leave, and better working conditions. When we created that petition, I spoke to my coworkers about the importance of fighting for these demands. We had to be careful when we were talking about this because not everyone could know about it. But we got over a hundred signatures among people on my shift.

Every week, a core group of us have phone calls to talk about updates and discuss the next steps as well.

Is there anything else people should know about what the pandemic has been like for you and your coworkers?

Tyson has given some workers pay increases, but not to others. The plant where my wife works is very crucial, because it’s where all the slaughtering begins. So there are several plants that depend on the smooth functioning of her plant. In that plant, the de-bone department is getting a raise to $15 per hour. But only those workers. They are doing this to retain those workers right now because so many of the other workers are sick, so they need to make sure those workers stay there. The supervisor’s explanation of why the raise has only being given to those workers was to say that it’s because they work with knives, so their job is more dangerous. I don’t believe that.

And, to clarify, have you or your wife contracted COVID-19 during the past year?

No, but I was recently exposed to it and demanded to be quarantined. I asked if my wife would be in quarantine, and the company told me, “No, only you.”

And there’s no pay while you’re quarantining?

No. So far, they haven’t paid me anything.

Jason Ramirez is a worker at a Tyson Foods poultry processing plant in Arkansas.