Because no Republicans were expected to vote for the bill, Schumer needed every senator in his 50-member caucus to support the legislation in order to push it through the Senate. 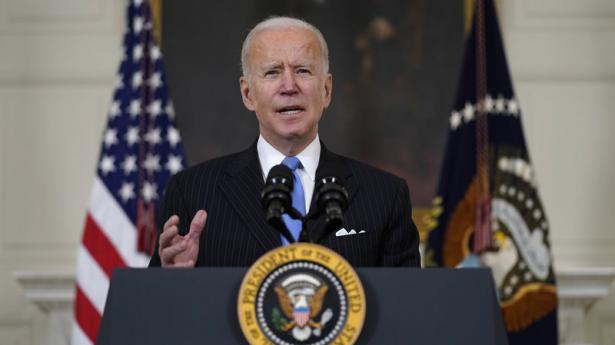 President Biden speaks at the White House about efforts to combat COVID-19 on Tuesday. , Evan Vucci/AP
The Senate on Saturday approved a sweeping coronavirus relief bill on a strictly party-line vote after a marathon session, giving Democrats their first legislative victory since reclaiming the majority.

Democrats cheered the 50-49 vote as it was gaveled closed. Sen. Dan Sullivan (R-Alaska) missed the vote.

Sen. Lisa Murkowski (R-Alaska), seen as the only potential swing vote in the end, voted against the $1.9 trillion bill.

The package provides another round of stimulus checks, aid for state and local government, and more help for small businesses and schools. The party-line vote is a significant break from the previous five coronavirus bills, each of which passed with bipartisan support.

The Senate was in session for more than 24 hours, including all night Friday and well into Saturday, ahead of the final vote as Democrats fended off attempts by GOP senators to make changes to the legislation, which now has to go back to the House before it can be sent to President Biden’s desk.

The House will take up the bill on Tuesday for a vote and plans to send it to Biden's desk for a signature early next week, House Majority Leader Steny Hoyer (D-Md.) said in a statement.

The hours-long Senate debate wasn’t without a significant injection of chaos as Democrats tried to navigate their first big legislative battle with a narrow 50-50 majority that required all Democrats to stick together in order to pass the bill.

Democrats started their first amendment vote at 11:03 a.m. on Friday and held it open for nearly 12 hours as they tried to negotiate a deal on the unemployment language.

Republicans were even able to temporarily get in their amendment to lower the payments to $300 per week through mid-July, but in the end, Democrats agreed to provide a $300-per-week payment until Sept. 6, lining up with a deal the party announced on Friday night.

"Our goal has been to secure the strongest possible protections for jobless Americans that could pass the Senate," Senate Finance Committee Chairman Ron Wyden (D-Ore.) said about the final deal on jobless benefits.

The hang-up happened after it quickly became apparent that a deal announced on Friday morning, which would have provided a $300 weekly payment into early October, didn’t have the support of all 50 Democratic senators, which it needed in the face of GOP opposition.

Democrats huddled with Sen. Joe Manchin (D-W.Va.), the lone holdout, for hours before ultimately clinching the agreement for the payments into September. The deal also makes the first $10,200 in unemployment benefits tax-free for households with an income of up to $150,000.

“When we started negotiating it took longer than it should have. But we got it done, we got a better deal,” Manchin said on Saturday about the talks.

Manchin said that he wasn’t aware of the initial unemployment deal until 10:00 a.m.on Friday, around the same Democrats announced that they had a deal.

“‘I said wait a minute.’ Something I had never heard about,” Manchin added.

Though the Senate bill largely reflects the House legislation, the unemployment agreement was one of several significant changes.

The Senate bill also stripped out language that would have increased the minimum wage to $15 per hour by 2025. The move came after the parliamentarian advised that the inclusion of the minimum wage hike did not comply with arcane rules that govern what can be included in reconciliation, the process Democrats are using to avoid the 60-vote filibuster.

Senate Budget Committee Chairman Bernie Sanders (I-Vt.) forced a vote on the amendment, but it fell short of the 60 votes needed to overcome a procedural hurdle. Democrats could have tried to overrule the parliamentarian, an option favored by Sanders, but it didn’t have the support of the White House or some of Sanders's colleagues.

Sanders, who told reporters that he wasn’t surprised by the defections, vowed to try again.

“If any Senator believes this is the last time they will cast a vote on whether or not to give a raise to 32 million Americans, they are sorely mistaken,” he said.

The agreements to pare down parts of the bill reflect the reality of the Democrats' fragile majority. Because no Republicans were expected to vote for the bill, Schumer needed every senator in his 50-member caucus to support the legislation in order to push it through the Senate.

That meant finding ways to appease centrist senators, who had gone public with their desire to “target” the House bill, without losing progressives, who want the party to go as large as possible amid a global health pandemic that has killed roughly 522,000 people in the U.S. and infected nearly 29 million since early last year.

"Well, there's a lot of talk. Biden has been helpful. ... He's taking it seriously," Sen. Dick Durbin (D-Ill.) told reporters this week about trying to move their first big piece of legislation with no room for error.

Asked on Friday what was happening behind the scenes as they navigated the fight over unemployment benefits, Durbin added that Democrats were “trying to find some common ground.”

Republicans tried late Friday night to punt the Senate's debate until 10 a.m. on Saturday. But after Democrats blocked that effort, Republicans offered dozens of amendments to try to change the bill, which they argued was too big after Congress approved roughly $900 billion in new funding late last year.

Republicans also relished in the hours-long setback that put Democrats' scramble under the spotlight.

"The whole idea behind this, I gather from listening to them over the last few weeks, was to use the crisis to jam through what the White House chief of staff called 'the most progressive domestic legislation in a generation.' A little tougher than they thought it was going to be, isn't it? It turns out to be a little bit tougher," said Senate Minority Leader Mitch McConnell (R-Ky.).

Part of the struggle for Democrats was making sure any change they made would be palatable to the House, where progressives were keeping a wary eye on the Senate debate.

Democrats also have a razor-thin margin in the House, where no Republicans are expected to vote for the bill, and Speaker Nancy Pelosi (D-Calif.) can't afford to alienate any faction in her caucus.

Democrats had been concerned that including Sen. Rob Portman's (R-Ohio) amendment to end the unemployment payments in mid-July could cause House Democrats to refuse to take up the bill. Democrats want to get the relief bill signed into law before current jobless benefits expire March 14.

"This trend is outrageous: Eliminating $15/hr Reducing thresholds for payments. ...Cuts to weekly payments What are we doing here? I'm frankly disgusted with some of my colleagues and question whether I can support this bill," Rep. Bonnie Watson Coleman (D-N.J.) tweeted as the Senate talks played out.