The juxtaposition of cowboys with urban life is a unique spin on neo-westerns, particularly due to the lack of black representation in the genre. 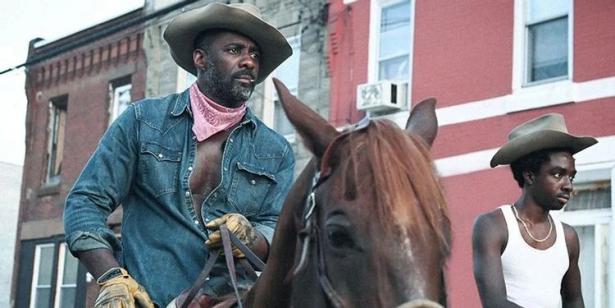 Giddy up for the first trailer for Netflix’s Concrete Cowboy starring Idris Elba and Caleb McLaughlin. Ricky Straub directs the two stars in his feature film debut, which premiered at TIFF in September of last year. His film is based on the 2009 novel Ghetto Cowboy by Greg Neri, about a young teen (McLaughlin) who is sent to live with his estranged father (Elba) in Philadelphia, where he learns about local urban cowboys and contends with his direction in life.

The first trailer for Concrete Cowboy shows us a powerful exploration of the strained relationship between father and son, highlighting the acting prowess of McLaughlin and Elba. This is particularly notable for McLaughlin, as it is one of his first major roles outside Stranger Things. The movie and the trailer really rest on the shoulders of Cole (McLaughlin), who must carry the film as the protagonist undergoing a crisis of conscience and direction.

As he struggles with his relationship to his estranged father, it seems as though Cole has two paths he must choose between. He rekindles his friendship with his troubled cousin (played by Moonlight’s Jharrel Jerome), who is tempted to turn towards a life of crime in order to escape his current circumstances. However, his father does also bring him into the urban cowboys community, where he could perhaps find new purpose and meaning, as well as reconcile with their troubled history. McLaughlin’s emotional confrontation with Elba is a highlight of the trailer.

Based on the two-minute trailer alone, it feels like Straub does the incredible by combining timely themes of family drama, coming-of-age questioning, urban decay and gentrification, as well as teaching audiences about the incredible true story behind the film. Concrete Cowboy is inspired by the urban cowboys of the Fletcher Street Urban Riding Club in North Philadelphia. Over a century old, the club teaches neighborhood kids horsemanship as a way to instill good values and skills for the future.

These weighty themes in tandem with a moving real-life story promise a compelling film for audiences. The juxtaposition of cowboys with urban life is a unique spin on neo-westerns, particularly due to the lack of black representation in the genre. Plus, at least we also get some good McLaughlin and Elba content in anticipation of Season 4 of Stranger Things and James Gunn’s The Suicide Squad respectively.

Concrete Cowboy rides into Netflix on April 2. Check out the official trailer below.