The War FOR Government

It's time to make a militant case for government that is every bit as emotive and powerful as the forty-year case against, which was so compelling that it persuaded millions of people to vote for their own subjugation. 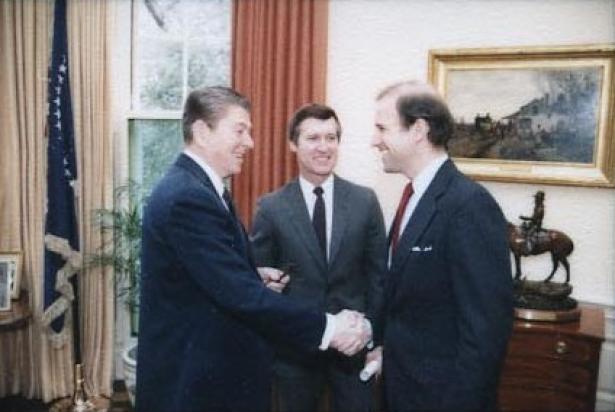 Forty Januaries ago, Ronald Reagan, upon assuming the most powerful governmental office in the history of civilization, declared in his inaugural address that “in this present crisis, government is not the solution to our problem; government is the problem.” To show he meant it, Reagan soon proposed a budget that gutted social programs and cut taxes. The idea was that, down the road, it would be harder to restore such programs and still profess yourself dedicated to fiscal responsibility.

Some years later, an incisive observer of American politics reflected on that pivotal moment in 1981: “The Reagan tax cuts have ended growth of the social agenda; it’s all come to a screeching halt.” The observer was a young senator named Joe Biden. He had voted for the Reagan budget. Now, like many of his Democratic colleagues, he would have to live in the political and moral — and narrative — universe it created.

In a remarkable swerve of history, forty years later, Biden, now president of the United States, has a chance, should he choose to embrace it, to break us all out of that universe. The war on government bankrupted itself spiritually and materially a long time ago. What dances on the horizon is the prospect of a war for government.

First came the American Rescue Plan, which was far from everything progressives wanted and far from everything the country needed, and yet, with that longer 40-year view in mind, a departure from the hegemony of the government-is-the-problem caucus. Now comes word of Biden’s plans for the second phase of his policy rollout, dealing with more chronic ailments, having already targeted the most acute crises.

According to a new report in The New York Times,

President Biden’s economic advisers are preparing to recommend spending as much as $3 trillion on a sweeping set of efforts aimed at boosting the economy, reducing carbon emissions and narrowing economic inequality, beginning with a giant infrastructure plan that may be financed in part through tax increases on corporations and the rich.

Now, I have my own preferred policy rollout list, and I’m sure you have yours, and many of my priorities, including, say, Medicare for All or all public college being free, aren’t anywhere on this list. But while we can, and should, get into the particular policies, there seems to be something more elemental and fundamental to say about this moment. With this proposed $3 trillion in spending, over and above the $1.9 trillion of the rescue plan, and with the philosophy animating the spending more importantly, Biden has become an unlikely deserter of the war on government.

More than former Presidents Bill Clinton and Barack Obama, who, unlike Biden, were not fixtures of Washington in the Reagan years and didn’t vote for any of his agenda. We don’t yet know if Biden has the stomach to make as strident a case for government-as-solution as Reagan made against the state. But it would be foolish not to observe that, thanks in part to the agitations of those who have shown the war on government to be an epic disaster (and who have fought Biden oftentimes), something new is happening. The proof that it is happening is that a moderate like Biden is on board.

In the coming weeks, there will be the familiar haggling and begging and bully pulpiting and Manchining as these proposals run through the congressional grinder. But it would be a mistake to treat this as a purely legislative challenge. Think back to Reagan. First there was the argument against government; then there was the dismantling of it. In the coming months, I long to hear an equal and opposite case for government, one unlike any I’ve heard in my gray, elder-millennial lifetime.

I heard the faintest hint of it some days ago when, in celebrating the passage of the American Rescue Plan, President Biden said these words: “We need to remember, the government isn’t some foreign force in a distant capital. No, it’s us, all of us, we the people.” In the United States of America, this is a more radical statement than it ought to be. I threw out all my bingo cards in 2020, but I will say that I didn’t have Joe Biden making the case that the government is us.

I don’t think Biden had a religious awakening. I think the five intersecting crises of the past year made it impossible for anyone in his position to attempt to be anything but transformational and go down in history as a serious person. There was Covid, of course, and the more chronically unhealthy country it found. There was the economic crisis it unleashed, and, again, the more chronically precarious and hard-up econony that crisis exacerbated. There was the racial crisis put front and center by Black Lives Matter and, more generally, a growing recognition of the need to reckon with things long overdue and make the society safe and healthy and dignified for people of all marginalized backgrounds. There was the democratic crisis revealed by the fact that, for a while there, we weren’t sure about a peaceful transfer of power. And there was climate, the question that refuses to go away, even in plagues, with coronatime perhaps serving as a test drive for what it looks like for the world to rally together.

Again, by this I don’t just mean introduce governmental solutions and spend money, which Biden is already doing. I mean adding to that a militant case for government that is every bit as emotive and powerful as the forty-year case against, which was so compelling that it persuaded millions of people to vote for their own subjugation.

I’m talking about truly educating Americans about what the government does — not just the famous parts of it that we hear about on the news and argue about without end. But the uncelebrated and obscure and dull parts of it that keep our food safe and roads clean and Social Security checks printing and markets open and schools teaching and medical research coming, that give us things like the internet.

Some of this advovacy is the work of people in government itself. But we in the media have a role to play. Mark Zuckerberg didn’t make himself an entrepreneur-hero-king (before he became a fallen emperor). We made him that. We put him on magazine covers. We covered his thoughts as if they reflected thinking. We built him up into something more than yet another guy running an ad-based business without scruples.

Well, it’s going to take many of us in media, in Hollywood, in music, in the culture more generally to reflect on how we have been captured by Reagan’s story, however we may think we despise it. Captured by the basic narrative that what we do alone matters more than what we do together, that denigrates or just overlooks the commons. And we ought to find ways to tell other stories. Stories of solidarity and collective adventure and shared purpose and systemic answers. Stories of unsung heroes. Stories of kind and decent structures rather than just kind and decent individuals.

I don’t know if those who can, will choose to take advantage of this moment in this way. But I believe they have a window of opportunity to end a whole damned age.

Thank you for reading this post from The Ink. If you like what we do and want more of it, consider supporting our work by subscribing to The Ink. Every single subscriber helps make this enterprise possible.