film 'What Is It About My Freedom That Bothers You?': How Trans Films Are Evolving

The recent BFI Flare festival of LGBTIQ+ films showcased a raft of transgender titles from a powerful family drama to a devastating documentary about a jazz musician. They bear witness to a complicated but optimistic new future 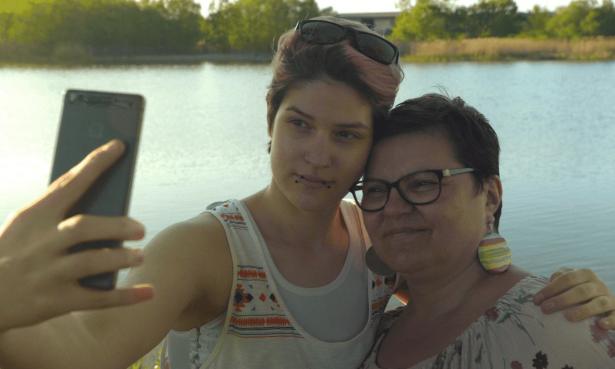 he scenery and production design of Cowboys make you sit up and take notice from the off. They feel like signals that this is not just another trans tearjerker but a film with much bolder ambition and complexity.

The plot revolves around dad Troy and 11-year-old Joe, who run away from their problems together into the Montana wilderness, with but the flimsiest of plans. We are given context via flashbacks: Troy’s struggle to “be a good man” and Joe’s to “be a girl”. The interweaving works well yet results in a lack of time spent up in the mountains, getting to know present-day father and son.

Young newcomer Sasha Knight is a testament to the treasures producers can unearth if they see trans casting as an opportunity rather than a chore. His pain, fear and joy feel viscerally real throughout, not just because he is a talented actor but because he can, of course, empathise with his character. He does not have to approximate or analogise Joe’s experiences and so, as viewers, neither do we.

Watch the trailer for Cowboys

This emotional realness paradoxically leaves space for richer dynamics to play out in the plot. While some tired tropes and clunky dialogue (“I’m in the wrong body!”) mean Cowboys stops short of being a great trans film, it triumphs as a moving portrait of parenthood and family, two more universal experiences with the power to make and break any of us.

Rūrangi is about a trans man returning to his rural hometown after an unexplained 10-year absence and it, too, relies on flashback to bring us up to date. While the conscious LGBTQ+ casting pays off, the film as a whole suffers from a lack of plot driving everything forward. Eventually, we understand where protagonist Caz is coming from, but we never find out where he is going or what he wants. Instead, the film offers engaging, well-executed, albeit sometimes over-egged, scenes from a trans life. They play out in small-town New Zealand but could probably be transposed elsewhere.

There is a kind of storytelling about trans people (usually by non-trans people) that mistakes trans experience – coming out, transition, family rejection, etc – for plot. A few years ago, this was understandable, perhaps even a necessary growth stage. But portraying gender dysphoria, or even euphoria, as the story in and of itself is no longer enough. Nor does it do justice to one’s ample on-screen talent.

Rūrangi began as a miniseries that was recut into film shape. Hopefully, it can be disassembled again and develop rich present-tense storylines in future episodes.

Another Flare film that struggles with lack of story arc is the affecting Colors of Tobi. It is never fair to judge a film by what is not, however, given the rise of the far-right and anti-LGBTQ+ politics in Hungary in recent years, it was a shock to slowly realise this is not the film’s backdrop.

Instead, the documentary zooms its much more intimate lens in on one working-class family with three almost-adult children, one of whom is figuring out their gender identity.

Watch the trailer for Colors of Tobi

The family, in particular Tobi and mum, are full of charisma and unafraid to have bracing, faltering conversations on camera. The director does a brilliant job of recognising when her big characters are about to enact a small human drama and letting the camera soak it up.

Yet there is also a risk to being hands-off with such a complex individual story. Sometimes it feels as though the director is not fully equipped to translate what she captures for her audience and it is not clear whether Tobi could not or would not share a little more of their inner dialogue.

There were moments when it seemed as though this filmmaker might also have mistaken a complex trans person for a compelling trans story. Rather than collaborate more with Tobi to find the narrative that truly is their journey, the editing hints at more sensational ideas, such as regret and confusion. These may well be accurate or projections, added to create tension or simplicity where neither really existed.

Thiessa Woinbackk, star of the Brazilian coming-of-age drama Valentina, is a trans YouTube star and activist in her home country. She is also a formidable screen presence and another exciting discovery among this year’s Flare lineup.

The titular character is a moody and defiant, yet smart and tender teen, upon whose shoulders the universe happens to have placed the added weight of being trans. In the opening scene, when forced to out herself to a club bouncer during a night out with friends, she impatiently asserts: “That’s me five years ago,” wearing an expression that says: “Now let me in, I want to dance like everybody else.”

Watch the trailer for Valentina

It is clear that she does not see herself as a victim, so nor should we. In terms of where we are in the global struggle for trans equality, this characterisation feels very real and timely. And yet, precisely because Valentina is a girl, her small-town, conservative surroundings and the men who dominate it may yet break her spirit.

This film assuredly explores intersections of gender inequality, sexuality and societal change. It’s transness is not a crutch or a hook but rather a rubric, which it uses to ask new and surprising questions, such as, for example, Valentina in the final scene: “What is it about my freedom that bothers you?”

No Ordinary Man is trans history, one many of us assumed we would never get to see and some feared did not even exist. It is also a meta narrative in more than one way, which sounds dubious but is magnificently executed.

The life story of mid-20th century trans jazz musician Billy Tipton is told in part as straight biography, with home audio recordings and black and white photos. A full sense of the man remains elusive but the makers know this. Indeed, they are asking: why is that?

Watch the trailer for No Ordinary Man

We also go, and return throughout, to a casting call for a Tipton biopic, where a diverse range of trans masculine people are auditioning for the leading role. It’s surprising and instructive in its own right to see these script readings become emotionally charged over and over again.

Lastly, by way of sociopolitical analysis and context, Tipton’s original biography – Suits Me: The Double Life of Billy Tipton – is firmly but fairly critiqued from contemporary trans perspectives. We are reminded of how absolute the “trans people are deceitful” theory was and how recently that began to change.

So, there is a lot going on and yet the documentary retains room to breathe, and to exhale in disbelief and sigh with feelings of collective grief for our hidden elders. Then, just when you think both you and the film are spent, in comes the inscrutable Billy Jr, who held his father as he died from treatable illnesses .

This is a devastating and mighty documentary. It offers us – trans or cis – vital lessons about our past and reassures us of entirely different and hopeful ways forward.

Towards the end of No Ordinary Man, the writer Thomas Page McBee says that people who are transgender “are learning to tell our own stories”. This year’s BFI Flare lineup of trans-led and trans-made films is promising evidence of this. But it is also a reminder that, while seeing trans actors play trans characters is powerful and necessary, it is not enough.

Empowering trans people to tell trans stories at every level is not about ticking boxes or being woke; it’s much simpler than that. It’s about unlocking great stories and making films that are as good as they can possibly be.