'It's Not a Border Crisis,' Says Ocasio-Cortez. 'It's an Imperialism Crisis... a Climate Crisis... a Trade Crisis.'

The New York Democrat also explained how the U.S. carceral system and foreign policy relate to the nation's immigration system. 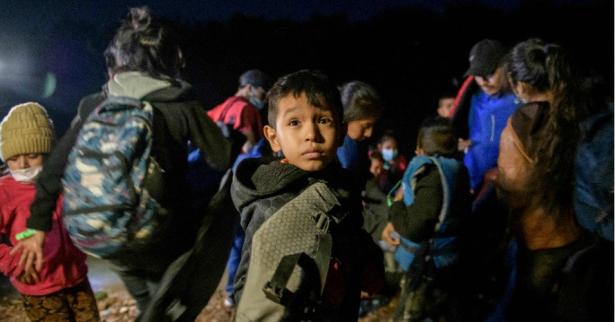 South American immigrants arriving illegally from Mexico disembark from an inflatable boat on the U.S. bank of the Rio Grande river at the border city of Roma on March 28, 2021., (Photo by Ed Jones/AFP via Getty Image)

Rep. Alexandria Ocasio-Cortez took to social media Tuesday night with a detailed reminder of the root causes of Central Americans and other migrants seeking asylum at the United States' southern border.

The New York Democrat is known for engaging with constituents and critics alike on social media. One Instagram user asked the congresswoman: "Why are you not addressing the border crisis and the kids in cages like you used to?" She responded in a series of what are called "stories," which disappear from the platform after 24 hours—though recordings of her comments are now circulating elsewhere online.

"Are you for real?" Ocasio-Cortez said, visibly frustrated by the claim. "So let's talk about this because so much of our national conversation, which is not a conversation, about immigration is driven by people who could not care less about immigrants."

"And also, it's a carceral crisis," Ocasio-Cortez added, "because as I have already said, even during this term and this president, our immigration system is based and designed on our carceral system."

The congresswoman, an outspoken opponent of former President Donald Trump's immigration policies, put out the videos as the Biden administration is struggling to process asylum-seekers at the southern border—particularly children, who are generally not being deported under a public health law invoked by both administrations to limit access to the United States during the coronavirus pandemic.

President Joe Biden has been criticized this month for restricting journalists from entering facilities for the children. As the Associated Press reports:

The Biden administration for the first time Tuesday allowed journalists inside its main border detention facility for migrant children, revealing a severely overcrowded tent structure where more than 4,000 people, including children and families, were crammed into a space intended for 250 and the youngest were kept in a large play pen with mats on the floor for sleeping.

...The children were being housed by the hundreds in eight "pods" formed by plastic dividers, each about 3,200 square feet (297 square meters) in size. Many of the pods had more than 500 children in them.

Ocasio-Cortez is not alone in pushing for a more comprehensive conversation about immigration. In a Sunday appearance on CNN, fellow "Squad" member Rep. Jamaal Bowman (D-N.Y. ) not only called for providing better resources, safety, and housing to those currently seeking asylum but also advocated for the U.S. government helping to "rebuild Central America in the same ways that we have destroyed it."

On Instagram Tuesday, Ocasio-Cortez similarly said that "number one, our solutions need to be rooted in foreign policy, because our interventionist history in foreign policy and history over decades of destabilizing regions drive people to migrate—but people don't wanna have that conversation."

"Then we have the issues of trade, which economically contribute to... some of these conditions that add fuel to the fire," Ocasio-Cortez explained, before challenging the way that some political figures, reporters, and others are discussing the rising number of people—including children—seeking to enter the country.

She asserted that "anyone who's using the term 'surge' around you, consciously, is trying to invoke a militaristic frame and that's a problem, because... this is not a surge. These are children, and they are not insurgents, and we are not being invaded—which, by the way, is a white supremacist idea."

Ocasio-Cortez was among those who responded with alarm last month when the Biden administration announced it was reopening a controversial detention center for unaccompanied children. She tweeted that "this is not okay, never has been okay, never will be okay—no matter the administration or party."

"Our immigration system is built on a carceral framework," she said, calling for boldly "reimagining our relationship to each other and challenging common assumptions we take for granted."

The Department of Homeland Security "shouldn't exist" and Immigration and Customs Enforcement has "gotta go," Ocasio-Cortez said, pushing for a ban on for-profit detention and creating a special status for climate refugees—which experts warn will become increasingly necessary as humanity activity continues to heat the planet.