Activist and Florida Rights Restoration Coalition president is doing the work to make sure his state’s disenfranchised due to felony convictions, regain their power. 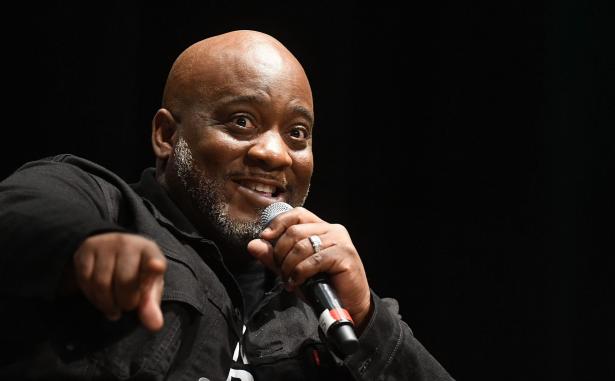 When voting rights activist Desmond Meade cast his vote in the Florida state primary election this past August, it was his first time voting in more than 30 years.

In 2018 Meade helped spearhead a successful effort to amend Florida’s state Constitution to restore the right to vote for more than 1.4 million Floridians who, like himself, had been disenfranchised due to previous felony convictions. This issue is estimated to impact nearly 6 million Americans.

The amendment cruised to victory with nearly 65% of the vote, and is widely touted as the single largest expansion of voting rights in the U.S. in half a century—bringing an end to 150 years of what has been dubbed by some as Jim Crow-era law in Florida.

This achievement is every bit as impressive as Meade himself. Nearly two decades ago he was incarcerated for three years on a drug conviction. Upon release, he overcame homelessness and earned both bachelor’s and law degrees before establishing himself as a bona fide social justice leader. Today he is the executive director and president of the Florida Rights Restoration Coalition (FRRC). Time magazine named Meade one of the 100 most influential people in the world, but Meade is far from resting on his laurels. He insists there’s much more work left to be done. -Chandra Thomas Whitfield

This interview has been edited and condensed for clarity and brevity.

Chandra Thomas Whitfield: You’ve accomplished a lot in your life. How do you describe what you do?

Desmond Meade: I’m just kind of hanging on for a wild and crazy ride! I lead an organization of people with felony convictions and family members who have loved ones impacted by the criminal justice system. [FRRC] focuses on ending discrimination against people with felony convictions; including the disenfranchisement piece, whether it’s voting rights or if it’s dealing with criminal justice reform issues or reentry issues, which pretty much is [all] related. We’re, I would say, the leading voice [on] this issue in the state of Florida.

Whitfield: Tell me more about your work as chairperson for the Floridians for a Fair Democracy and how this is personal for you. What kept you motivated during this process?

Meade: For Amendment Four, we started the preliminary work in 2012, officially launched the petitions in October of 2014, and successfully passed [the measure] in November 2018. I am directly impacted; I’m a returning citizen myself. So, the combination of me being directly impacted and then just being motivated by the countless number of stories that I’ve heard from returning citizens throughout the state. I think those are the two main things that really kept me going. Also, in 2016 my wife ran for [a seat on the state legislature] here in Florida. I was so busy with the campaign that I really didn’t pay too much attention [to my own voting status] until someone mentioned me going to vote. That reminded me I couldn’t vote.

Whitfield: There are probably a lot of Americans out there thinking, “Why should I care about some ex-cons voting?” What’s your response?

Meade: First and foremost, I don’t think there’s anything that speaks more to [American] citizenship than being able to vote, especially when you talk about people who have paid their debt [to society]. They should not be [penalized forever]. We believe that once a debt is paid [to society], it’s paid, and folks should be able to continue on with their lives and participate in democracy. The other piece is that at the end of the day, you have folks that are out here trying to live their life [and] do the right thing. They’re also paying taxes; not being able to vote is a form of taxation without representation. We were able to actually show through studies done by the state of Florida that when you restore a person’s civil rights—when you encourage them to participate in elections—[it] actually helps reduce the recidivism rate. When people [make] an investment in their community, they’re least likely to commit another offense. Restoring civil voting rights is really a win-win situation.

Whitfield: What are some of the main challenges that you and your FRCC team face in trying to get your message out to those you’re seeking to assist?

Meade: COVID-19 has really hampered the ability to engage other returning citizens one-on-one. Because of the infection rates here in Florida, it’s very hard to actually do in-person canvassing. We have had to try and figure out other creative ways to get in contact with folks and to have conversations with them; either through phone-banking, through social media, and in some cases, even through mail. Then you have the fact that once we passed the amendment, the Florida legislature codified requirements of having to pay off all legal financial obligations before a person is eligible to register to vote. We know that it’s estimated that around 774,000 of the folks [who regained the right to vote] have some type of legal, financial obligation that they have to pay prior to being able to register to vote [again]. These fees range in cost anywhere from a couple hundred dollars to a couple million dollars [per person].

Whitfield: That’s a lot of money, but you and your team came up with a pretty creative response to the Florida legislature’s mandates, right?

Meade: We thought that after we passed the initiative that we were going to have some time off to relax, but immediately after, the Florida legislature started trying to codify the implementation. In response, [we] started a fines and fees campaign that did two things. We worked with select officials in a few counties—state attorneys, public defenders, maybe clerks of courts and the court system—to establish a process in which people could use the provisions of the legislation that would allow them to petition the court or a judge to waive their fines and fees. We [also established that process] with a group of elected officials in different counties. The other thing [was] that we started a crowdsourcing campaign that raised a lot of money from rich donors to help people pay off their fines and fees so [that] once again that they would be able to vote.

Whitfield: What would you say were some of your biggest accomplishments in the last election cycle?

Meade: Actually demonstrating in real time how advocating for people with felony convictions can be done in a way that not only benefits the lives of people who’ve been impacted by the criminal justice system, but also their families and the community as a whole. [Also] our ability to respond to the pandemic in such a way that we were able to address the immediate needs of providing PPE’s [personal protective equipment] in prison cells [and] among homeless populations, and populations in communities that were hit the hardest by COVID-19, doing it in such a way that allowed us to engage in voter registration.

Last year we raised over $27 million and we paid off fines and fees [that were required for reinstatement] for over 44,000 people. I think the granddaddy of the things that we accomplished that we’re proud of is that in spite of the COVID pandemic, over 80,000 individuals with felony convictions were able to get registered to vote, and that over another hundred and something thousand of their family members were able to get registered to vote after the passage of Amendment Four. We know that close to 60% of them actually went out and voted for the first time ever in their lives.

Whitfield: What do you want people to know about this issue of felony disenfranchisement?

Meade: I think it’s very serious, and I don’t know a better way to explain it other than saying that voting is a powerful tool that people can use to bring about the change that they want to see. I always tell folks that when you go into a voting booth, that’s the one time where you have just as much power as the richest person in the world. It’s one [person] and one vote. Especially in light of what’s been going on in our country [and] in our communities. I think voting has literally become a life or death situation. If we want justice in our communities, we’re going to have to show up on Election Day and make sure that’s what we’re voting for.

Chandra Thomas Whitfield is an award-winning multimedia journalist whose work has appeared in The New York Times, The Washington Post, Essence, Ebony, NBCNews.com and HuffPost. She recently completed a Leonard C. Goodman Institute for Investigative Reporting fellowship, for which she hosted and produced In The Gap, a podcast about how pay inequity and discrimination impacts the lives and livelihoods of Black women in the American workforce.

Prism is a BIPOC-led non-profit news outlet that centers the people, places, and issues currently underreported by national media. We’re committed to producing the kind of journalism that treats Black, Indigenous, and people of color, women, the LGBTQ+ community, and other invisibilized groups as the experts on our own lived experiences, our resilience, and our fights for justice.