A recent survey of restaurant workers confirms what insiders know: that the industry has the highest rate of sexual harassment, and a reliance on tips exacerbates the problem. Eliminating the tipped wage would go a long way to fixing the problem. 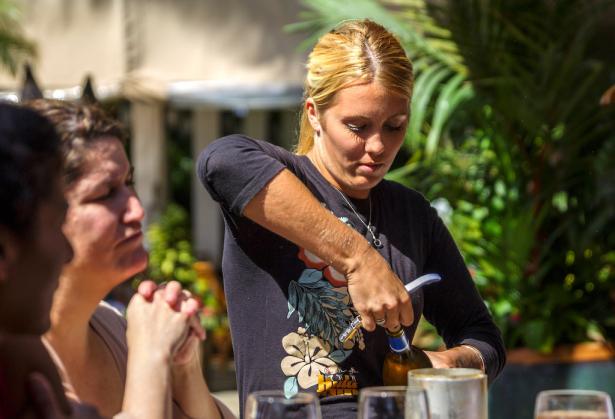 According to a recently published report, tipped workers were significantly more likely to have been sexually harassed than their non-tipped counterparts,Flickr

During my first shift as a server, when I was in high school, a customer left his number in the space on the receipt reserved for the tip.

I’ve always thought of this incident as my very efficient introduction to the world of work. In the years since, food service jobs presented me with many similar such incidents. There was the time my manager told me to hide from a regular who always followed me out of work, rather than confront him. There was the time I quit my hostessing job: a bartender was getting increasingly aggressive with his harassment and when I brought it up to management, my boss said I had been hired because of my appearance, as if this was all that needed to be said about the situation.

A new report confirms that mine was the typical, rather than exceptional, experience of restaurant work. “The Tipping Point: How the Subminimum Wage Keeps Incomes Low and Harassment High,” a project of One Fair Wage, a nonprofit that advocates for an end to the subminimum wage for tipped workers, and the UC Berkeley Labor Research Center, details the extent of the problem, drawing on a nationally representative survey, conducted by Social Science Research Solutions in January 2021.

Overall, 71 percent of women restaurant workers report being sexually harassed at some point during their time working in restaurants, the highest rate of any industry. While much of this harassment comes from customers, 44 percent of respondents say they have been harassed by a supervisor, management, or restaurant owner. This is not necessarily one-time harassment either: 37 percent of the workers interviewed “described situations in which the harassment continued for a month or more, and that the behaviors during this period occurred frequently or almost every shift.” Almost all of the workers surveyed — 98 percent — were retaliated against for reporting said harassment.

But the report, coauthored by Catherine MacKinnon and Louise Fitzgerald, shows that it isn’t simply restaurant work in itself that creates the conditions for harassment; reliance on tips compounds the problem. Relying on tips is already a problem for any worker who hopes for even a modicum of predictability in their income, and in matters of harassment, it aggravates the issue.

This corroborates previous research by Restaurant Opportunities Center (ROC) United, a nonprofit workers’ center, which found that “women restaurant workers living off tips in states where the sub-minimum wage for tipped workers is $2.13 per hour are twice as likely to experience sexual harassment as women in states that pay the same minimum wage to all workers.” As the new report’s title suggests, it is the subminimum wage, the legal exemption of tipped workers from the standard minimum wage, that exacerbates this problem.

The way this process plays out is clear. Workers exempted from traditional minimum wage laws depend on tips to survive. This means being dependent on pleasing customers. What follows is as predictable as it is dangerous. Pleasing customers can mean laughing when they make advances on you while you’re in the hallway by the bathroom trying to get a moment of privacy. It can mean your manager telling you to show more cleavage. And it can mean saying nothing when someone harasses or even assaults you.

During the pandemic, the situation is worse than ever. Eighty-three percent of respondents to a One Fair Wage survey on restaurant workers’ experiences during the pandemic said that their tips have declined during the pandemic, with 66 percent reporting that their tips have declined by at least 50 percent. And then there’s the pandemic twist on sexual harassment. Forty-one percent of that survey’s respondents reported a noticeable uptick in harassment, and a new genre entirely, with customers threatening to “take your mask off and stick my tongue down your throat” and demanding servers take their masks off so they can “judge whether they deserve tips.”

All of which is why One Fair Wage’s report calls on Congress to pass the recently reintroduced Raise the Wage Act, which will raise the overall minimum wage to $15, phasing out the subminimum wage.

As Saru Jayaraman, president of One Fair Wage, said on a press call held on Equal Pay Day to discuss the new report and the Raise the Wage Act, the subminimum wage’s roots go back to the 1850s, to a strike by servers. Restaurant owners responded to the organizing by beginning to replace the male servers with women, whom they paid lower wages, and moving to a more tip-reliant model. Today, some two-thirds of the roughly five million tipped workers in the United States are women, making the subminimum wage “legalized gender inequity in wages,” according to Jayaraman.

“There’s a lot of talk about equal pay for equal work. Well, then we need to raise the tipped wage,” said Senator Bernie Sanders, who also spoke on the One Fair Wage call. Sanders called low wages “the most pressing economic problem” in the United States, and noted that he and other supporters of the Raise the Wage Act are up against the opposition of the National Restaurant Association, whose “line is that all waiters and waitresses love the status quo.” He went on to note that seven states — Arkansas, California, Montana, Nevada, Oregon, and Washington — have already eliminated the subminimum wage, and that there has been “no negative impact on restaurants at all.”

“If you just stand there and smile and accept things, they feel happy and they tip you more. If you say something back, they won’t tip or will leave a tiny tip,” explains Lori Gaines, a New York City bartender, in the One Fair Wage report. This is not complicated: tipped workers know their reliance on tips for survival sets them up for abuse, and in the wake of the #MeToo era, ending the subminimum wage is a no-brainer. Tipped workers need better, and they need it now.

Our new issue, “Biden Our Time,” is out now. We discuss the last four chaotic years of US politics, what happened in November, and what to expect from the Biden administration. Get a $20 discounted print subscription today!