When It Comes to the Climate Crisis, Those Responsible Should Be Held Accountable

Majority Action, has released a list of 30 corporate directors who are obstacles to climate progress—directors who should be voted out of positions of power to make way for people who are more climate literate. 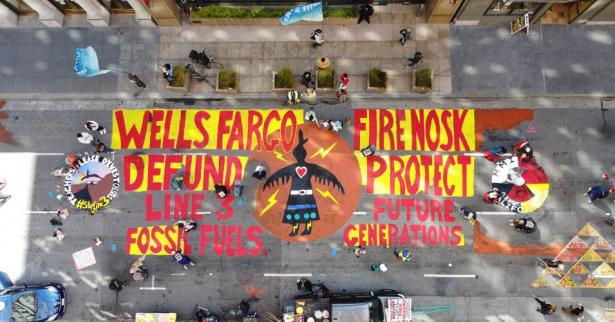 On Friday, hundreds of activists in San Francisco painted the street outside of Wells Fargo’s headquarters, urging the bank to both stop funding Line 3, and remove Noski from the head of the bank., Arthur Koch

Along with many others, I’ve spent the last four years urging JPMorgan Chase to stop providing financial services to the fossil fuel industry. It’s been no easy task. Since the Paris Agreement was signed, Chase has loaned more than $317 billion to the fossil fuel industry—33% more than any other bank on the planet. Want to build a massive new tar sands pipeline? JPMorgan is your bank. What to build a vast new coal mine? Just give Chase CEO Jamie Dimon a call, he’s your man.

In years of campaigning against JPMorgan, activists have tried a lot of tactics―from filing shareholder resolutions to shutting down streets outside of their headquarters. But last year, the campaign took a new twist. For the first time, it got personal.

In the climate fight, Lee Raymond is the ultimate Bond villain. As the CEO of ExxonMobil, he was the chief architect of a decades-long disinformation campaign to discredit climate science and brainwash Americans into questioning the reality of climate change. For more than thirty years, he was also a lead figure on JPMorgan Chase’s board.

Last year, a broad coalition of groups (many of whom are a part of the Stop the Money Pipeline coalition) launched a campaign to oust Lee Raymond from Chase’s board. And they won. Just a few months after major investors joined with activists in calling for Raymond to get the boot, he was gone for good.

Now, an investor advocacy group, Majority Action, has released a list of 30 corporate directors who are obstacles to climate progress—directors who should be voted out of positions of power to make way for people who are more climate literate.

Not every one of those directors is a supervillain like Lee Raymond. Some of them are just everyday members of the 1%—the majority of them are wealthy, white men and all of them have a long track record of putting profits above all else.

The Chairman of Wells Fargo’s board, Charles Noski, is a case in point. Noski hasn’t spent a significant portion of his career consorting with climate deniers. Yet, under Noski’s leadership, Wells Fargo has re-established itself as the world’s largest funder of fracking, doubled down on backing Line 3, and loaned billions to coal, oil, and gas companies. That alone is reason enough that he should be removed as the head of Wells Fargo’s board; he’s already proven himself incapable of leading a major corporation in the time of climate crisis.

People are beginning to catch on that men like Charles Noski should be held accountable for their role in worsening the climate crisis. On Friday, hundreds of activists in San Francisco painted the street outside of Wells Fargo’s headquarters, urging the bank to both stop funding Line 3, and remove Noski from the head of the bank.
It may seem like a bold move for advocates, to think that they can remove entrenched, powerful men like Noski from the boards of Wall Street banks. But they are not alone in wanting change.
Simiso Nzima is the investment director for CalPERS, a $449 billion Californian pension fund. "For anything to be effective you have to hold someone accountable," he said recently, stating that CalPERS will have “no qualms” voting against corporate directors who fail to take climate concerns seriously.
Meanwhile, Illinois Treasurer Michael Frerichs and Vermont Treasurer Beth Pearce are leading an effort to get more large public investors, such as state and municipal pension funds, to hold corporate directors accountable for failure to reduce their climate impact. "We have reached a time where boards need to act," said Mr. Frerichs.
As useful as it is to have pension managers and activists advocating against recalcitrant board members, what really matters is what the big asset managers decide to do.
Just three large asset managers, BlackRock, Vanguard, and State Street, own nearly 25% of the entire S&P 500—that is to say, they own nearly a quarter of the five hundred most valuable companies in the country. Those three companies almost single-handedly have the power to reshape corporate America, to decide who sits in positions of power, and who does not.
In the face of intense pressure, BlackRock, with nearly $9 trillion under management, has been talking a good game on climate. In 2020, BlackRock CEO, Larry Fink wrote in his annual letter to CEOs that the climate crisis “would fundamentally reshape” the world of finance. In 2021, he doubled down, warning that “companies risk votes against directors in 2021 unless they demonstrate significant progress” on climate.
But, talk is cheap. The truth of BlackRock’s commitments to climate action will be revealed this shareholder season. Will they use the greatest tool for systemic change they possess and vote off incapable directors like Charles Noski? Or will they allow those who got us into this mess another year to fan the flames of the climate crisis?
Only time will tell, but Larry Fink can rest assured that investors and advocates alike will be watching closely.
Alec Connon is the coordinator of the Stop the Money Pipeline coalition, a coalition of over 120 organizations working to stop the flow of money from Wall Street to the fossil fuel industry. He is also a writer. His first novel, The Activist, was published in 2016. Follow him on Twitter: @alecconnon