"We don't just need a wealth tax, we also need to give the IRS the tools it needs to make sure the ultra-rich finally pay their fair share." 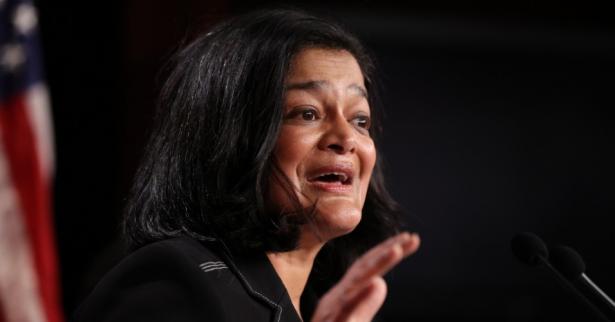 Rep. Pramila Jayapal (D-Wa.) holds a news conference to announce legislation that would apply a 2% annual tax on the wealth of households and trusts worth more than $50 million, plus an additional 1% annual surtax on net worth above $1 billion., (Photo: Chip Somodevilla via Getty Images)

Following IRS Commissioner Charles Rettig's admission Tuesday that tax dodgers are depriving the federal government of as much as $1 trillion or more per year, Congresswoman Pramila Jayapal called for strengthening the agency's ability to crack down on the rampant tax avoidance strategies used by America's wealthiest individuals and corporations.

"We don't just need a wealth tax," said the Washington Democrat, who is a co-sponsor of the Ultra-Millionaire Tax Act that was introduced last month by Sen. Elizabeth Warren (D-Mass.). If enacted, the bill would levy a 2% annual tax on the net worth of households and trusts above $50 million, plus a 1% annual surtax on billionaires—bringing in at least $3 trillion in revenue over 10 years without raising taxes on 99.95% of U.S. households.

"We also need to give the IRS the tools it needs to make sure the ultra-rich finally pay their fair share," Jayapal added.

While Warren's wealth tax legislation includes robust anti-evasion measures, Rep. Ro Khanna (D-Calif.) in February unveiled a standalone bill—the Stop Corporations and Higher Earners from Avoiding Taxes and Enforce Rules Strictly (CHEATERS) Act—that would provide $100 billion in additional funding to the IRS over a decade, enabling the agency to bring in an estimated $1.2 trillion in federal revenue during those 10 years.

Such an investment in beefed-up enforcement is sorely needed, according to Rettig's testimony during Tuesday's Senate Finance Committee hearing.

Although the IRS has officially calculated a "tax gap" of $441 billion based on figures from 2011-2013, Rettig—who was appointed to lead the IRS in 2018 by former President Donald Trump after spending decades battling the agency—said the difference between taxes owed and taxes paid "could approach and possibly exceed $1 trillion per year."

"The fact is that nurses and firefighters have to pay with every paycheck and so many highfliers can get off," Wyden said.

Politico reported Tuesday that "a confluence of factors suggest the tax-gap growth Rettig projected, including increased virtual currency holdings, which weren't figured in the 2011-2013 period but now amount to more than $2 trillion worldwide."

"Rettig also said counting foreign-source income and illegal-source income would increase the tab, too, and that IRS research indicates $175 billion in underpayments among the wealthiest Americans," the news outlet noted.

While Rettig's prediction of a $1 trillion-plus tax gap far exceeds the IRS's outdated estimate—the next official one will be released next year—it is hardly a surprise to IRS researchers themselves. Last month, as Common Dreams reported, two of the agency's analysts, along with a team of progressive economists that included Emmanuel Saez and Gabriel Zucman of the University of California, Berkeley, published a paper that documents the scale of tax evasion at the top of the income distribution.

According to their analysis, the top 1% of U.S. households don't report around 21% of their income. Moreoever, 36% of all unpaid federal income taxes in the U.S. can be attributed to tax dodging by this small cohort of extremely wealthy people. In addition, 6% of the nation's richest households' unreported income "correspond[s] to undetected sophisticated evasion" tactics, such as offshoring, pass-through businesses, and other avoidance strategies.

ProPublica reported in 2019 that in recent years, the IRS has audited the poor at around the same rate as the richest Americans, who have been the principal beneficiaries of years of budget cuts and staff shortages at the agency.

Furthermore, another recent study by the Institute on Taxation and Economic Policy (ITEP) showed that 55 U.S. corporate giants paid $0 in federal income taxes last year, and 26 of them haven't paid a dime for the past three years—a time period in which the GOP's "morally and economically obscene" tax cuts for corporations and wealthy Americans have been in effect.

Instead of paying a collective $8.5 billion in federal income taxes on last year's profits of $40.5 billion, as mandated by the statutory 21% corporate tax rate, the 55 companies exploited preexisting loopholes and pandemic-related tax breaks to reduce their tax bills to zero, as the ITEP report explains. Not only did these corporations secure a zero-tax liability, they received a collective $3.5 billion in rebates, bringing the total amount of lost federal revenue to $12 billion.

It is for these reasons that Matt Gardner—author of the ITEP paper—argued, like Jayapal, that "stopping corporate tax dodging is just as important as a higher tax rate."

The American Jobs Plan, an overwhelmingly popular infrastructure proposal that President Joe Biden introduced two weeks ago, "would stop companies from avoiding taxes on their domestic profits and their offshore profits and work with foreign governments to institute a global minimum tax," as Gardner explained in an op-ed published earlier this week in Fortune.

While "the president's call to increase the statutory rate from 21% to 28% for domestic corporate profits will receive most of the attention," Gardner wrote, "his plan for ending offshore tax avoidance is equally important."

In addition, Biden's fiscal year 2022 budget proposes a 10.4% increase in IRS funding, "with most of the additional money tabbed for enforcement," as Politico noted. "Rettig admitted the IRS is currently 'outgunned' in trying to keep pace with all the tax avoidance and cheating, and he endorsed the idea of mandatory funding for the agency."

Gardner applauded "the administration's goal of undoing a decade of budget cuts to the IRS so that it can enforce the tax laws that big, profitable companies easily skirt right now."

"The ease with which the biggest corporations are able to get around the law," he wrote, "is a potent signal to the many Americans who distrust our government that the rules are written for the benefit of the best-off."