Stand with Haiti! A Call for Solidarity

Over 60 organizations call for support of the resistance by the Haitian people to the US-backed dictatorship of Jovenel Moise, and suggest concrete ways for progressive-minded people to take action in solidarity with Haiti. 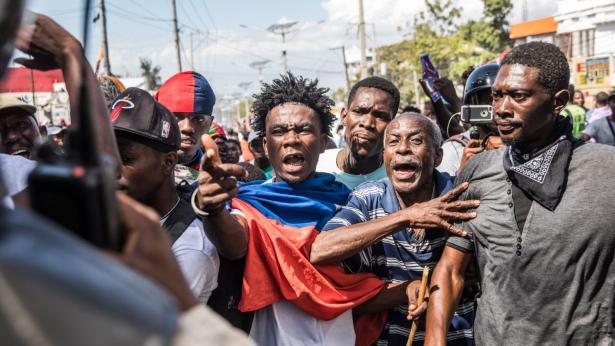 Demonstrators march in Port-au-Prince on 14 February 2021, to protest against the government of President Jovenel Moise.,AFP

This statement, written by Haiti Action Committee and signed by over 60 organizations, commemorates the 10th anniversary of the return to Haiti of former President Jean-Bertrand Aristide and First Lady Mildred Aristide. It calls for support of the resistance by the Haitian people to the US-backed dictatorship of Jovenel Moise, and provides concrete ways for progressive-minded people to take action in solidarity with Haiti.

Ten years ago on March 18, 2011, former president Jean-Bertrand Aristide, his wife and colleague, Mildred Trouillot Aristide, and their two children, returned from forced exile in South Africa. Tens of thousands of people lined the streets of Port-au-Prince and poured into the courtyard of their home to greet them, seeing in their return a renewal of hope for a democratic and just Haiti.

In honor of that day and to demonstrate our resolve to support the people’s movement in Haiti, we the undersigned organizations join with Haiti Action Committee to call for a Day of Solidarity With Haiti on March 18, 2021.

Over the last month, hundreds of thousands of Haitians have put their lives on the line to demand an end to the dictatorship of Jovenel Moise. The demonstrations have involved the breadth of Haitian society, from residents of the poorest neighborhoods to students, women’s organizations, nurses, doctors and lawyers — all of whom have experienced the terror unleashed by the Moise regime.  The popular movement in Haiti is calling for a transition government, a government of public safety (Sali Piblik) that promotes the security and welfare of the Haitian people, that ends the repression against popular organizations, and that moves the country peacefully towards genuine free and fair elections.

Moise and his right-wing PHTK party have been ruling by decree for over a year, and are pushing to enact illegitimate constitutional reforms that would give him even more authority. Even though his official term of office ended on February 7th, he has announced his intention to remain in power for one more year.

The Moise regime represents a continuation of the U.S.-orchestrated 2004 coup that ousted the government of President Aristide, Haiti’s first democratically elected president.   The coup aimed at restoring the power of the tiny Haitian elite that was threatened by Aristide’s progressive policies and his attempt to bring about a new Haiti — one in which the majority would rise from “misery to poverty with dignity,” and in which the phrase “Tout Moun Se Moun” (Every person is a human being) would become a reality.

From the very beginning, the Moise regime has been illegitimate. He first came to power through a U.S.-U.N. organized fraudulent election that was annulled only after widespread protests. The next round was also replete with fraud and voter suppression and was denounced widely in Haiti as an “electoral coup.” In protest, Haitians staged over 60 straight days of  massive demonstrations and mounted legal challenges that were cut short by occupation authorities. In the end, the U.S., U.N. and the OAS imposed Moise as president, leading to the crisis in Haiti today.

In November, 2018, as Moise consolidated his power, Fanmi Lavalas Political Organization, the party founded by Aristide that has long represented the interests of Haiti’s poor majority, issued a statement titled Crisis And Resolution, demanding an end to the dictatorship. It read, in part:

“The population is rejecting the usurpers who have derived their power from the fraudulent elections and who have discredited themselves with multiple scandals involving corruption and impunity. Our people are facing savage repression that continues to create victims among the disadvantaged masses, and that is heightening the insecurity that is poisoning daily life for the majority. Fanmi Lavalas Political Organization continues to stand firmly with the Haitian people to “chavire chodyè a” (overturn the cauldron). No cosmetic solution will bring an effective and lasting solution to the crisis in which we are plunged. This system has run its course. It cannot be patched up. It must be changed.”

These words ring even more true today. Moise’s rule reminds Haitians of the terrible days of the Duvalier dictatorships. It has been marred by repeated acts of blatant corruption and repression. Billions of dollars in funds designated for social programs and infrastructure development, provided through Venezuela’s Petrocaribe program, instead went into the pockets of government officials. U.S. and U.N.-trained Haitian police and affiliated gangs or death squads have carried out massacres in one opposition neighborhood after another, with the backing of high government officials.

Community residents protesting the lack of basic services have seen their homes burned to the ground, as happened in the Port-au-Prince neighborhoods of Lasalin, Tokyo, Site Vensan, and Bele among others. Kidnappings and gang rapes have become the order of the day, as government-affiliated gangs prey on the population. No one is safe, including street vendors and market women with little to no funds.

While the country descends into state-sponsored terror, impunity remains the order of the day. Well-known perpetrators with arrest warrants such as G-9 death squad leader Jimmy “Barbecue” Cherizier, wanted in connection with the massacre at Lasalin in 2018, go about freely and even receive police protection. In a disgraceful statement, U.N. Secretary-General Antonio Guterres on October 20, 2020 credited the G-9 with reducing homicides — while the G-9 was murdering residents of Bele and burning their homes — thus giving a U.N. seal of approval to these crimes.

Without the support of the U.N., U.S., E.U. and the OAS — the so-called Core Group that exercises control over Haiti — the Moise government would fall. That is why the first action of the Biden Administration in relation to Haiti was so appalling. State Department spokesperson Ned Price announced in February that the U.S. government would support Moise remaining in power until February 7th, 2022, giving Moise another year to attempt to dismantle all opposition.  Millions of US dollars have already been provided to the Moise dictatorship to fund his murderous security forces as he ratchets up repression in his efforts to keep his PHTK party in power.

As Haitians rise up once again to demand democratic governance, security and economic and social justice, we echo their call.

1. End U.S. recognition and support for the dictatorship of Jovenel Moise

4. Support the Haitian people’s movement for democracy and self-determination

Direct these demands to the following officials and to your Congressional Representative and Senators:

Task Force on the Americas

Women of Color in the Global Women’s Strike

Women’s International League for Peace and Freedom US