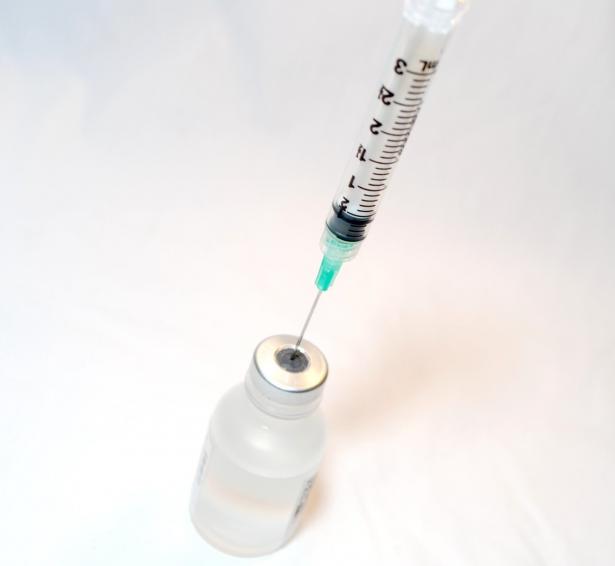 "Syringe and Vaccine" by NIAID,licensed under CC BY 2.0

Led by South Africa and India and backed by more than 100 World Trade Organization (WTO) member nations, the proposed patent waiver would enable manufacturers to replicate vaccine formulas that are currently under the exclusive control of major pharmaceutical companies, whose profit-driven approach has left huge swaths of the developing world without access to life-saving shots.

"Allowing countries to manufacture locally will expedite access to vaccines and treatment, prevent unnecessary deaths, expedite global vaccination efforts, and facilitate a stronger, faster economic recovery," the senators wrote in a letter (pdf) to Biden Friday morning. "Simply put, we must make vaccines, testing, and treatments accessible everywhere if we are going to crush the virus anywhere."

Despite widespread support for the patent waiver among the international community, former heads of state, Nobel laureates, hundreds of civil society groups, and the head of the World Health Organization, a handful of rich countries—including the U.S., the United Kingdom, and Canada—have repeatedly blocked the proposal since it was introduced in October.

In a press release Friday announcing the new letter, Sanders' office pointed to a Data for Progress survey released Thursday showing that 60% of U.S. voters—72% of Democrats, 57% of Independents, and 50% of Republicans—want Biden to support the temporary patent waiver.

"Your administration has the opportunity to reverse the damage done by the Trump administration to our nation’s global reputation and restore America's public health leadership on the world stage," the senators wrote. "To bring the pandemic to its quickest end and save the lives of Americans and people around the world, we ask that you prioritize people over pharmaceutical company profits by reversing the Trump position and announcing U.S. support for the WTO TRIPS waiver."

The letter comes weeks ahead of the WTO's May 5-6 meeting, during which member nations are expected to consider the patent waiver as well as other proposals aimed at addressing massive vaccine inequities.

As Common Dreams reported on Wednesday, WTO Director-General Ngozi Okonjo-Iweala has advocated a "third way" approach that critics warn would leave vaccine recipes and manufacturing under the total control of pharmaceutical corporations, entrenching global inequities and prolonging the fight against Covid-19.

"Global supply should not be dependent on the purely commercial prerogatives and exclusive rights of pharmaceutical companies holding the technology," 250 civil society organizations wrote in a letter (pdf) to Okonjo-Iweala earlier this week. "There is simply too much at stake. In the context of WTO, temporarily waiving relevant intellectual property rules that reinforce monopolies is an important contribution."

On top of robust international support and the backing of Senate Democrats, a growing coalition of U.S. House members is also urging the Biden administration to end U.S. obstruction of the patent waiver. Rep. Jan Schakowsky (D-Ill.) has reportedly garnered more than 60 signatures for a letter urging Biden to support the proposal.

"There are so many voices now getting to the president that I still feel optimistic that the right thing can be done by the United States," Schakowsky told The Hill last month.

Read the full letter from the 10 senators:

We write regarding the urgent need for the United States to support the temporary waiver of some Trade-Related Aspects of Intellectual Property Rights (TRIPS) rules proposed by India and South Africa at the World Trade Organization (WTO) during the COVID-19 emergency. We urge you to support the adoption of this temporary waiver; doing so will help to ensure the most effective and efficient response to this once-in-a-lifetime global pandemic.

The TRIPS waiver proposed by India and South Africa in October 2020 would temporarily lift certain intellectual property barriers and allow countries to locally manufacture COVID-19 diagnostics, treatments, and vaccines. Allowing countries to manufacture locally will expedite access to vaccines and treatment, prevent unnecessary deaths, expedite global vaccination efforts, and facilitate a stronger, faster economic recovery. From a global public health perspective, this waiver is vital to ensuring sufficient volume of and equitable access to COVID-19 vaccines and therapeutics around the world, which is why the waiver is supported by more than 100 nations. The TRIPS waiver is also essential to ensure all global economies, including the United States’ economy, can recover from the pandemic and thrive. Simply put, we must make vaccines, testing, and treatments accessible everywhere if we are going to crush the virus anywhere. Unfortunately, despite widespread support for its adoption, the Trump Administration led opposition to the waiver and, with a handful of other WTO signatories, has blocked its adoption.

As the World Health Organization (WHO) Director General Tedros Adhanom Ghebreyesus said last year, “this virus does not respect borders.” Regardless of our vaccination efforts here in the U.S., we cannot successfully combat COVID-19 without supporting the efforts of other countries in our collective fight against this virus. Unless countries cooperate and share medical technology, there simply will not be sufficient supply of vaccines, diagnostics, and treatments for many countries—particularly developing countries—to effectively manage COVID-19. Our globalized economy cannot recover if only parts of the world are vaccinated. While some countries have the resources necessary to get shots in arms immediately, without large increases in production, many countries may not have access to widespread COVID-19 vaccination until as late as 2024. We cannot afford to wait this long. Emerging COVID-19 variants show more resistance to vaccines and are more infectious.

They spotlight why time is of the essence: further delay in developing immunity around the world will only lead to faster and stronger mutations.Not only would this delay cause additional, unnecessary loss of life, but it would also imperil the success of vaccination efforts currently underway –potentially rendering existing vaccines ineffective. Our vaccination efforts here at home will only be successful if vaccination efforts in the developing world happen simultaneously. Supporting the TRIPS waiver will help us all.While industry may argue that the TRIPS waiver is unnecessary, it is clear that the current flexibilities included in TRIPS are ill-suited to an urgent, global crisis. TRIPS allows countries to negotiate compulsory licenses, a flexibility that was reaffirmed in the Doha Declaration. However, compulsory licenses must be negotiated by each WTO member country and for each patent or other protection applying to each individual product. This country-by-country and product-by-product approach is unworkable given the speed and global scope of access necessary to combat a global pandemic. Relying on the existing, insufficient flexibilities also subjects other countries to significant political pressures, making it harder for countries to pursue this option.

Initiatives to expand access to COVID-19 vaccines and treatments by the WHO have also proven woefully inadequate. The COVID-19 Vaccines Global Access (COVAX) initiative promises two billion vaccine doses to developing countries by the end of 2021. Even if COVAX could obtain these vaccines, that amount would cover doses for just 20 percent of the populations of all participating countries. Moreover, the COVAX initiative does not include treatments. This is not sufficient to end the pandemic worldwide. We will never be successful in battling a global pandemic if we leave every country to fend for itself. This temporary, targeted TRIPS waiver is essential to eliminating restrictions that currently prevent countries from manufacturing COVID-19 treatments, vaccines, and testing supplies. It would allow countries and manufacturers to directly access and share technologies to produce vaccines and therapeutics without causing trade sanctions or international disputes.Expanding vaccine access to developing nations is not only a moral obligation, it is economically effective.

Recent data show that nationalistic vaccine policies will cost the world an estimated $1.2 trillion per year. In fact, wealthier nations have already purchased more than 53 percent of the supply of the most promising vaccines. In addition to the public funding and support they have already received, pharmaceutical companies are already seeing significant COVID-19 vaccine revenue. As countries worldwide compete for limited supplies, developing nations will have to pay pharmaceutical corporations monopoly prices for access. This harsh reality is already unfolding before our eyes with reports of South Africa paying more than double the price paid by the European Union for the AstraZeneca vaccine.

On the other hand, for each dollar wealthy nations invest in getting vaccines to the poorest countries, they will receive approximately $4.80 in return. The American public paid pharmaceutical and medical device industry giants billions of taxpayer dollars to expedite research and development of COVID-19 vaccines and therapeutics. The best return for the American public on such an extraordinary investment would be the swift defeat of the virus across the globe through mass vaccination. Delaying vaccine deployment in the developing world to lock in profit boosting patent protections threatens the safety of the American public that financed the vaccines in the first place.

Further, in the United States, Congress has appropriated billions of dollars of emergency relief for the travel, tourism, and hospitality industries and is planning billions more. The airline industry alone has received $40B in relief over the course of the pandemic and an additional $14B is being considered. These industries will remain in crisis and reliant on billions more in government help until the pandemic eases. The faster we can bring this emergency to an end, the faster these industries can recover. The TRIPS waiver is key to the end of the pandemic and a strong American recovery.

As COVID-19 ravages the globe, we know that any vaccine or therapeutic pharmaceutical corporations develop is 100 percent ineffective for those that cannot access it. This global pandemic has forced all of us to re-prioritize and work together to flatten the curve and overcome the virus. We need to make public policy choices, both in the U.S. and at the WTO that put lives first. This temporary, targeted TRIPS waiver is a critical tool in overcoming this once-in-a-lifetime pandemic; the benefits vastly outweigh the red herring arguments used by the pharmaceutical industry against the approval of this targeted, time-limited waiver.

Your Administration has the opportunity to reverse the damage done by the Trump Administration to our nation’s global reputation and restore America’s public health leadership on the world stage. To bring the pandemic to its quickest end and save the lives of Americans and people around the world, we ask that you prioritize people over pharmaceutical company profits by reversing the Trump position and announcing U.S. support for the WTO TRIPS waiver.