Alfresco dining shelters are, in the midst of so much sadness, shining instances of the sheer bounce of creativity on our streets; they do what architecture ought to:solve social necessities with improvised forms; make common design from common need. 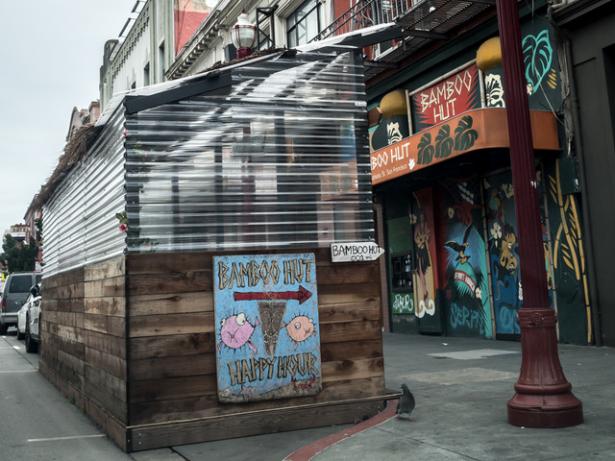 Back in the nineteen-sixties, the Museum of Modern Art held a trailblazing exhibition called “Architecture Without Architects,” curated by the historian Bernard Rudofsky, about “organic,” or folk, structures, the kind we know from tree houses and pueblo dwellings. It showed how expressive and useful and even beautiful buildings can be when they are built from need and a living appetite for expressive form, rather than from the slow-moving dignity of commissions and architects. Rudofsky’s insight was reinforced by the architect Christopher Alexander, who, in a memorable series of books, asked us to see buildings not in terms of fixed blueprints and famous designers but of vernacular rhythms, with self-emergent forms rising from self-healing communities. Alexander celebrated what he called “pattern languages” that give those who use them the ability to create new structures. “All acts of building are governed by a pattern language of some sort,” he insisted. “The quality without a name appears . . . when an entire system of patterns, interdependent at many levels, is all stable and alive.” Outdoor-dining venues were high on his list of institutions that made people “comfortable, and deep seated in respect for themselves.”

Well, the people of New York City have been in the improbable midst of such a moment, as witness to, and makers of, an emergent pattern language, reflecting something almost desperately lived—our shared pandemic. This pattern language, of course, is the newly invented art form of the Outdoor-Dining Shelter, which began to appear on New York curbs in midsummer, blessedly taking over the parking spaces outside restaurants that serviced only cars, those anti-urban engines. Although not always strictly made without architects—various construction firms have sprung up to fill the demand, with neatly prefab designs—the outdoor shelters are essentially spontaneous, improvised, and designed to fill the felt needs of the specific restaurant, whose offspring, like some newly born calf ejected from its mother’s body, has been thrust across the pavement from its entrance.

Although many of us pray that this reconquest of the street for citizens, instead of for their smoke-emitting chariots, will be permanent, these specific shelters, built for a moment or a season, will likely disappear, as more shots hit more arms, less contagion spreads through fewer people, and the old dining order is restored. Indeed, some of the outdoor-dining shelters are being dismantled already, as restaurants start to return to indoor dining, even with reduced numbers of guests and tables. But, as a witness to the incredible ability of New Yorkers to do what Rudofsky and Alexander, et al., said that architecture ought to—solve social necessities with improvised forms, making common design from common need—the outdoor shelters are, in the midst of so much other sadness, a shining instance of the sheer bounce of creativity on our city streets. Herewith, some informal notes—made as much for readers a hundred years from now, who will wonder how this thing happened, as for those of today—toward an Anatomy of Outdoor Dining, sourced from the Upper Sides, West and East, and meant merely as a first draft to be filled in with variants (dangerous word!) and local accents as they appear throughout the city.

The outdoor-dining structure, it would seem, comes in three essential patterns or modes—the Hut, the Shed, and the Tent—with many hybrids and crossovers. The three modes morph into three major moods: Let’s Pretend This Isn’t Happening; Welcome to My Dystopia; and Baby, It Isn’t Actually Cold Outside. Their rhythm and pattern follow, at least officially, a set of rules, laid down by the city last summer, that are at once exhaustively and intricately articulated—the outdoor space, for instance, has to be separate from the normal indoor space of the restaurant—and, like so many other rules issued by the city, effectively unenforced. Yet the challenge of the outdoor-dining structure, underlined by all those minute regulations, is actually simple: it has to persuasively declare itself “outside”—ventilated, open, and discouraging to the implied, if invisible, transmission and circulation of aerosolized sputum—while still maintaining many qualities that one might normally associate with, well, the tricky concept of “indoors”: heat, shelter, and possible propinquity to others. This fiendishly intricate double demand has been met in many ways.

The Shed is the primal form of outdoor pandemic dining: a simple overhang made of wood or corrugated plastic, extended out over a frame, usually with a lean-to bias, and with one side open to the elements or, at most, covered with a transparent, plastic-shower-curtain-like material. Tables can be set in standard restaurant order, with tablecloths and wineglasses and napkins, conveying a slightly surreal feel of a Buñuel film, a normal bourgeois dining room placed right out in the cold. Most often, the tables in the Shed are symbolically, if not efficaciously, divided by partitions, most often of plastic or Plexiglas, that create—or, frankly, are meant to create—an illusion of sanitary division.

The Hut is an extension of the Shed into a conscious representation—though often only a representation, a convincing fiction—of a more fully formed building, with doors that close and “windows” that open. Often, too, it contains cosmetic representations of the normal appurtenances of permanence: the Hut looks like a tavern, or a fairy cottage, or an auberge. The Tent, by contrast, uses flexible material—awnings and circus-like “tops”—with ventilation and circulation as much implied as achieved. Tents often give away their makeshift origins elsewhere—as wedding tents, or rent-a-tents for other outdoor occasions, pressed into service as lifeboats for this one. The Tent comes in two kinds: essentially the adapted wedding tent, turned into a coffee shop, as at the nicely named Utopia Diner, on Amsterdam and Seventy-second Street; and the tournament tent, right out of “Ivanhoe,” with curlicued tops, as it was earlier this year at Gracie Mews Diner, on Eighty-first and First. The Tent is both the most logical of all outdoor-dining types, the one that seems most instantly adaptable from other purposes, and yet also the most awkward when put in place, because the basic reality—of being sealed off inside while being told you’re outside—is most indisputable.

The Let’s Pretend This Isn’t Happening theme can be addressed either through a disconcertingly complete enclosure or through extended, extravagant openness. In the upper Nineties on Madison, for instance, you can find perhaps the most elaborate of the little mansions of the Let’s Pretend moment, with the glorified new cottage that the Italian restaurant Vicolina has constructed. A kind of Italian auberge, it has a “thatched” roof and—an astonishing touch—paper “smoke” emerging from the chimney. It is essentially a full outdoor transfer of an indoor restaurant. (The famous eighteenth-century Italian line about the condom, a barrier to pleasure and an invitation to infection, does seem to apply here.) Yet an alternative version of the same transmitted emotion—with a radically different, indeed, opposite, structure—can be found crosstown at the Surrealist outdoor-dining Shed of the Spaghetti Tavern, on Amsterdam at Eightieth, which expresses an urge to normalize by utter denial. Completely open to the elements, and deliriously structured from whiskey barrels and tavern-like tables, the restaurant’s outdoor structure has, of all things, a moose—the whole damn moose—sited on top, looking south toward the Time Warner Center. Both structures purposefully morph into the world of fantasy—one open, one enclosed. They try to mask their temporariness with indirection and declare themselves places of their own, just as good as, if more whimsically inflected than, their original homes across the pavement.

Meanwhile, the pleasing form of the Hut has been miniaturized and made ominous by the Pod—the small Plexiglas-and-metal enclosure for dining by two alone. This sinister little invention, the ultimate statement of the Welcome to My Dystopia mood, can be found flourishing on East Fifty-ninth Street, outside Bloomingdale’s—a department store doubtless in crisis, like all the others—where the newly installed Pods allow you to insert yourself for a two-hour lunch, in the grand Train Bleu tradition of the place, protected both from the elements and from the passing contamination of anyone not in your intimate circle. That this would be 2021’s conception of dining pleasure is hard, but essential, to believe.

A radically ideal statement of the It’s Not Cold Outside approach can be found at a French restaurant called Jacques Brasserie, over on East Eighty-fifth street, where each table is at once placed en plein aire and warmed by an overhead heater. (One of the decorative elements worth extended study is the electric cord, which can be tucked away with Bauhaus trimness or left to dangle with rococo flourish.) Here, not only do you have the pseudo-sanitary division of tables by partitions but you also have, placed on every table, a pump bottle of Purell or the equivalent.

A stroll through any New York neighborhood right now is likely to display many instances and hybridized variants of all three kinds: Sheds, Huts, and Tents. On a single block on the West Side, you can find an incredibly dense coral reef of these patterns and moods. Two almost-adjacent Thai restaurants, Senn and Land, each follow a radically different path to serve their clients pad Thai and green curries: one in a Tent, the other in a form of Shed morphing into a Hut. These structures are gloriously placed near an Irish bar, the Dead Poet, which offers no shelter from the wind or cold, more or less directly inviting the passerby to get warm by drinking more, thus making plain both why Irish poets are superior and why they so often end up dead.

One truth unites these many efforts: none are content with mere structural shelter; all use one or another kind of ornament, undemanded by the city rules. Ornament reminds the passerby or the visitor of the kind, the mode, and the meaning of the restaurant temporarily transported outside: surfboards at a California restaurant, paper-cutout piñatas at a Mexican place, the indication of columns at a Greek diner transferred to a Tent, or the Eiffel Tower perched precariously on the street near a French bistro. The human appetite for ornament seems as enduring as human appetite.

At the end of a frigid anthropological exploration of the new building type, one might recede, simply for warmth, into what is still the greatest of all New York architectural surprises: the interior of the old Central Savings Bank building on Seventy-third and Broadway, as vast in feeling, and almost in height, as Grand Central Terminal, with an unparalleled coffered ceiling borrowed from some antique church or temple in Rome. The sudden likeness of building to building, of every building to every other, then comes home with astounding force. To the German immigrants who founded this improbable treasure-house, it was the old idea of the bank as a safe place, inviolable as much for its grandeur as for its impenetrability. For the instinctive architects of the new shelters, the idea is one of comfort and hygiene combined. All architecture speaks a simple double-tongued language of shelter and symbolism; all structures, large and small, temporary and permanent, churches and banks and coffee shops, share one pattern language. Every building, at heart, is a shed on the sidewalk with a significantly indicated purpose, a shelter enveloping a symbol. Whether eating or banking, we want safety, heat, and meaning, in about equal measure. As we pray for the persistence of this new social life on our reclaimed streets, let us also be grateful to these temporary shelters, even as they pass, for reminding us of this ever-warming truth.

Adam Gopnik, a staff writer, has been contributing to The New Yorker since 1986. He is the author of, most recently, “A Thousand Small Sanities: The Moral