A Life on the Court’s Left

Leftist lawyer Michael Tigar has spent his life in courtrooms defending a wide range of names big and small on the Left, from Vietnam War draft resisters to Bobby Seale and Angela Davis. He captures them all in a new memoir. 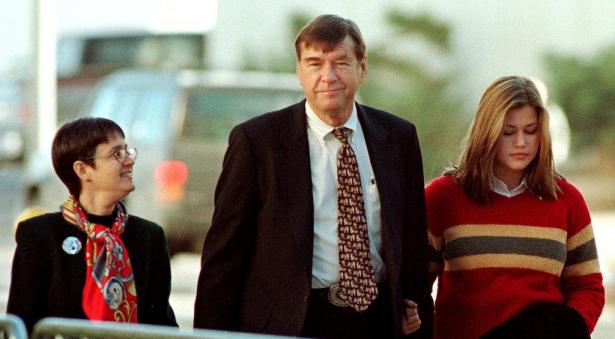 Michael Tigar arrives at the federal courthouse in Denver with his wife, Jane Blanksteen, and daughter for opening statements in the trial of Terry Nichols in 1997., (DOUG COLLIER/AFP)

Review of Sensing Injustice: A Lawyer’s Life in the Battle for Change by Michael E. Tigar (Monthly Review, 2021).

In the spring of 1960, in the wake of the Southern student sit-ins at Woolworth’s lunch counters in North Carolina, a group of us University of California, Berkeley students mounted solidarity picket lines at our own local Woolworths. Covering the demonstrations for radio station KPFA was a volunteer reporter and UC sophomore named Mike Tigar. (We were both Mikes back then.)

Mike interviewed me, we had a good time talking, and I invited him over for dinner. Afterward, going through my bookshelf, he asked to borrow C. Wright Mills’s The Power Elite. He left the house, I went to bed. In the wee hours, I was woken by the doorbell. It was Mike, returning the book, telling me, “This was great. Got anything else by him?” It was the beginning of sixty-year-long friendship. But at the time I thought, “Who the hell is this guy?”

To answer that question comes a memoir by Tigar, Sensing Injustice: A Lawyer’s Life in the Battle for Change.

The book’s prologue is a snapshot of Tigar’s first argument before the US Supreme Court in 1969, three years out from Berkeley Law. The case was a challenge to the Selective Service System’s (SSS) arbitrary use of punishment — without any due process — of young people resisting being drafted into the army to fight an unjust war against Vietnam. Tigar’s successful argument was in defense of a client who mutilated his draft card and faced possible loss of deferment and immediate conscription. The court’s opinion positively affected untold thousands of draftees and indirectly the arbitrary powers of innumerable government agencies.

Not many attorneys can claim a Supreme Court victory so early in their careers, but Tigar actually arrived at the court three years behind schedule. First in his class, Tigar was appointed by Justice William Brennan as his clerk. But when the young law graduate, wife and small son in tow, drove from California to DC to report to work, he found that he was out of the job. It seems the FBI, with its sometimes-fabricated reports, together with the Johnson administration (through Justice Abe Fortas, an old wingman for LBJ) didn’t appreciate Tigar’s opposition to the war and let Brennan know that the new clerk was unacceptable in the pristine precincts of the Supreme Court.

That disappointment was unfortunate for the young Tigar family, but a welcome development for readers of this memoir, because Tigar found work as an associate in the law firm of Edward Bennett Williams, the best and most important criminal defense attorney in the nation’s capital. Tigar became a protégé, and later a partner of Williams, who, through sheer legal acumen, loyal friendship, and brilliant wit, provides the reader with some of Tigar’s best stories.

Like his mentor, Tigar developed his own legend, based in no small part on his dramatic storytelling before juries, judges, and justices, and law classes where he was a faculty member at UCLA, the University of Texas, Washington College of Law, Duke Law, and France’s Paul Cezanne Aix-en-Provence law school. Happily, he has been able to transfer his considerable storytelling gifts to the printed page. (In his spare time, Tigar has also written three plays and a dozen other books.)

For example, explaining how he could make a living with a heavy pro bono docket, he tells of representing a corporate executive during a grand jury investigation. The client says to Tigar,

“I heard that you represented Angela Davis.” I said yes, I had. “Well, how is it you can represent me and her, given that politically we have nothing in common?” I asked him what his biggest problem was at the moment. He said, “This prosecutor seems hell-bent on messing up my life.”

“That’s interesting,” I said. “That was Angela’s problem too.”

I answered, “I represented her without a fee.”

“How does that work?” he asked.

“She was an underdog. I represent a lot of underdogs. I make it up by charging market rates to the overdogs. That’s you.” He seemed happy to be an overdog.

Tigar and Davis met when they were both UCLA faculty members, she in the philosophy department, he at the law school. Governor Ronald Reagan wanted them both dismissed and had a special and sustained vendetta against Angela, which culminated with her eventually on trial for her life. Facing the trumped-up murder charges of which she was later acquitted, and possible execution by police, she fled California and was arrested two months later in New York City.

As she fought extradition while helping put together her trial defense team, Tigar drafted and argued the pretrial motions which, though dismissed by the court, laid the basis for the successful defense at trial. Governor Reagan had appointed Assistant Attorney General Albert Harris to head the prosecution.

Tigar began his argument, “May it please the court, I am going to show that with Albert Harris as the engineer, the Marin County Grand Jury is America’s only working railroad.”

His consequential (though secondary) role in the Davis defense came two years later, after he similarly drafted pretrial motions in the case of the Chicago Seven stemming from the mass arrests at the 1968 Democratic Convention — although his role in that case took a perverse turn when Charles Garry, attorney for Black Panther leader Bobby Seale (the case was initially again the Chicago Eight) took sick. The presiding judge, Julius Hoffman, whose bizarre decisions throughout the proceedings became the stuff of fables, ruled that Tigar, and the three other attorneys who drafted pretrial motions, could act as Seale’s counsel.

Tigar, about to teach class at UCLA, refused to return to Chicago in order to humor Judge Hoffman, who then ordered Tigar to be arrested. In four laugh-out-loud pages, Tigar tells what ensued in the next wacky seventy-two hours — brought to Chicago by armed US marshals, tossed into jail with Seale and another defense attorney, bailed out by a bondsman who also represented the notorious mobsters “Ice Pick Willie” Alderman and “Milwaukee Phil” Alderisio, whose acquaintance Tigar had made years earlier working in Edward Bennett Williams’s firm.

Of course, Tigar’s role in the case, and in his fifty-year career as advocate, was serious business, often life-and-death serious. It wasn’t simply his amusing stories that, in 1999, led the California Attorneys for Criminal Justice to name Tigar, in a ballot for “Lawyer of the Century,” third — behind only Clarence Darrow and Thurgood Marshall. This was an acknowledgment of a career stretching from his early years defending draft resisters — including Fernando Chávez, son of César — to his later years in the international arena, when he helped train and mentor a new generation of black South African attorneys and served as an advisor to the African National Congress in South Africa on the drafting of a new constitution, and helped secure a judgment against the murderous Chilean junta that assassinated former foreign minister Orlando Letelier and his US assistant Ronni Moffet in the streets of Washington, DC. Tigar later spent time in London helping the Spanish prosecutors attempting to try the dictator Augusto Pinochet, then being held in the UK following a medical visit.

Tigar has a keen understanding that the scales of justice, and the government as a whole, are heavily weighted on one side in a society with so much class, race, and gender disparity. “The state,” he writes, “has more power to do harm than any private actor. The state resists accountability by means of secrecy and mendacity. . . . Even when its crimes are exposed, the state continues to deny responsibility for providing redress to the victims. Only rarely do the offending police and prosecutors receive discipline.” Tigar has spent his entire career doing battle with the state’s malfeasance. This is his “sensing injustice” at work.

The book includes snapshots of dozens of his cases, including many on behalf of corporate or political clients who would never be considered progressive but who were victimized by prosecutorial misconduct. The case of Terry Nichols is described at length, appropriately so since it took four years’ duration. On April 19, 1995, a white nationalist named Timothy McVeigh detonated a bomb at the federal office building in Oklahoma City, killing at least 167 persons, injuring hundreds of others, and causing millions of dollars of property damage.

McVeigh was arrested soon thereafter, eventually tried and sentenced to death. Terry Nichols was a friend of McVeigh from their time in the military, but he did not share his politics, and Nichols was in Kansas at the time of the explosion. He was initially considered a “person of interest” based on the friendship.

No Oklahoma defense attorney would represent Nichols, and Tigar, then living and teaching in Texas, had a national reputation in fighting the death penalty. The Oklahoma judiciary reached out to Tigar to ask him to be Nichols’ counsel. What followed was the legal equivalent of trench warfare, with scores of attorneys and law students moving in and out of the defense team, eventually winning crucial motions to separate the Nichols and McVeigh cases, to move the trial out of Oklahoma to Denver, and to recuse any Oklahoma federal judge from trying the case. At the end of the lengthy trial, the jury voted 10-2 to acquit on all counts.

Tigar is nothing if not erudite. To help illustrate his points, the author peppers the book with quotes from English poet John Dryden, Greek poet Heraclitus, the German writer Hans Magnus Enzensberger, George Bernard Shaw, Percy Shelley, Samuel Beckett, Lord Brougham’s defense of Queen Caroline in 1820, Berthold Brecht, and Stephen Vincent Benet, among others. What might be considered preening for another author is simply part of Tigar’s nature. It’s what happens when you’re an exceptionally bright child being raised by a single, working mom, and entertain yourself after school every day by bicycling to the library to read every available volume, memorizing any passages that strike your fancy. And then make that a lifelong daily practice, without the bike and branch library.

Tigar only alludes to the personal costs of his drive to know more, be better prepared, and work harder than anyone else in advocating for his clients. These include failed relationships, periodic exhaustion, and a bad case of shingles. A friend of mine into his third marriage once told me he tried until he finally got it right. Happily, Tigar got it right during the years of the Nichols case. A former New York Times journalist and author, Jane Blanksteen changed careers and attended Columbia Law, which required forty hours of pro bono work. When the Alfred P. Murrah Federal Office Building blew up in Oklahoma City, she wrote Tigar to volunteer her time. Those forty hours eventually became a quarter century and counting of a law partnership and marriage to Tigar.

In his play about Chicago’s Haymarket martyrs in late nineteenth century, Tigar has anarchist Lucy Parsons telling Clarence Darrow, “We are all on trial in this life we have chosen, Clarence. All we can know is that none of us will live to see the verdict.” My guess is that Parsons (or Tigar) has it wrong. Readers of Sensing Injustice will likely render a unanimous verdict on Tigar’s lifetime of fighting the good fight on our behalf.

Michael Myerson is an author and lifelong activist for civil rights, peace, and labor rights. He lives in the Hudson Valley.