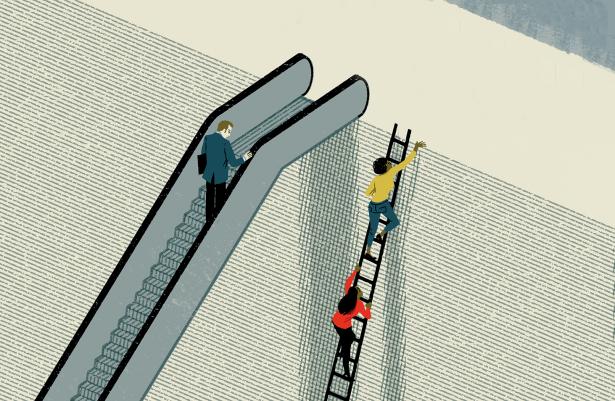 Many journalists are pushing their institutions to address pay disparities , Pep Montserrat

The median salaries of women and people of color at 14 unionized Gannett newsrooms was at least $5,000 less than those of their male and white colleagues, a new study by the NewsGuild Gannett caucus found.

A team of six volunteers put together the study, which was released Tuesday and includes data for roughly 450 employees from fall 2020. Newsrooms that participated in the study include The Arizona Republic, the Milwaukee Journal Sentinel and The Indianapolis Star. Gannett, the nation’s largest newspaper chain, owns more than 260 newsrooms, 41 of which are unionized.

“Getting the ability to do a pay equity study was one of the reasons that we organized at the Republic,” said Arizona Republic reporter Rebekah Sanders, who worked on the study. “Some Gannett newsrooms have been doing pay equity studies individually … but this is the first time that we were able to do a really comprehensive report that covered a big chunk of the chain.”

“I could not believe that number when I saw it,” Sanders said. “At the same time, I do believe it because among the veteran women journalists that I’ve spoken to, many have felt for a long time that they are underpaid.”

“The NewsGuild-CWA issued a misleading document based on outdated data alleging pay inequities on a small subset of Gannett’s more than 250 newsrooms. We strongly disagree with its methodology and its findings,” Anton wrote. “Gannett is a leader in the industry. Our market-driven approach to compensation ensures a fair review by role and responsibility level with considerations for geographic differences.”

In August 2020, as newsrooms across the country underwent their own racial reckoning, Gannett published demographic data that showed that most of its papers were whiter than the communities they served. The company pledged to “make its workforce as diverse as the country by 2025.”

The NewsGuild’s study also examined demographics at each of the 14 newsrooms, finding that 13 of them were whiter than the counties in which they were located. The Knoxville (Tennessee) News Sentinel was the only one that was more racially diverse than its surrounding community.

The News Sentinel was also the only paper in the study that employed more women than men. Across all 14 newsrooms, roughly 78% of employees were non-Hispanic white, and 59% were men. A January Gannett survey of all of the chain’s newsrooms found similar statistics.

Among veteran journalists at the company, women and people of color are rare, the study found. For example, of the 146 reporters who have worked more than 20 years at Gannett, roughly 27% are women and 13% are people of color.

Unions at other major newspapers like The New York Times and the Los Angeles Times have conducted their own pay equity studies. Sanders said it was important that the Gannett unions do a study across multiple newsrooms to allow smaller outlets to participate.

“If you have a small newsroom, it’s really difficult to conduct one of these reports,” Sanders said. “No. 1, because you might have limited resources and time when you have so few people in your newsroom. And No. 2, it’s really hard to anonymize the data if you only have, say, five, 10, 15 employees in your newsroom.”

The unions involved with the study are calling on Gannett to release anonymized pay data for the entire chain. They also urged the company to eliminate pay disparities, set starting salaries to a living wage, implement pay scales based on experience and create policies to improve the hiring and retention of people from underrepresented groups.

Gannett has experienced a wave of union drives in recent years, starting in 2019 with The Arizona Republic, which was the first newsroom to unionize during Gannett’s ownership. (Other papers unionized before Gannett purchased them.) Since then, at least 12 other newsrooms have launched union drives.

The unions involved with the study urged Gannett to “voluntarily recognize and bargain in good faith” with newsrooms that unionize. Of the 12 newsrooms, three are currently waiting for the results of their National Labor Relations Board election to become The Record Guild, and the rest are in the middle of negotiations.

While putting together the study, some newsrooms were unable to participate because the data the NewsGuild received from Gannett was incomplete. Sanders said the unions hope to put together an update sometime in the next year incorporating data from more newsrooms.

“It was an incredible amount of work to put this one together,” Sanders said. “I think we’re going to give it some time and also see you know how many more newspapers unionize over the next couple of months so that we could include them as well.”