In The CIA's 1st Plot Against the Castros, Fidel Wasn't the Target

New details have emerged of the first such plan, which was actually directed against Castro's brother Raúl Castro, in July 1960.

May 5, 2021 Greg Myer NPR
Printer friendly
In The CIA's 1st Plot Against the Castros, Fidel Wasn't the Target Published May 5, 2021 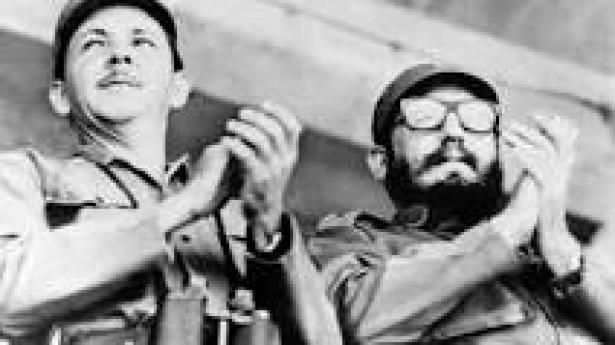 Cuban leader Fidel Castro (right) and his brother Raúl Castro, the head of the military, at a 1964 event in Santiago, Cuba. New details of the first CIA attempt to kill the Castros — a 1960 plot against Raúl — have recently emerged., AP

Exploding cigars. Poisoned pens. Booby-trapped seashells. These were just a few of the outlandish CIA plots to kill former Cuban leader Fidel Castro, who died of natural causes in 2016 at age 90.

Yet new details have emerged of the first such plan, which was actually directed against Castro's brother Raúl Castro, in July 1960, just a year and a half after the Castros had come to power in a revolution.

The key figure was a pilot for the national airline, Cubana: José Raúl Martínez.

Martínez was secretly working for the CIA — and his airline chose him to pilot a chartered flight to pick up Raúl Castro, who was on a visit to Prague, the capital of the communist nation of Czechoslovakia at the time.

Martínez immediately shared this information with the CIA's man in Havana, American William Murray, who relayed this to CIA headquarters outside Washington.

According to CIA documents, the "possible removal" of the top three leaders in Cuba — Fidel Castro, Raúl Castro and Che Guevara — was "receiving serious consideration at [headquarters]."

The agency was looking for an opportunity to eliminate all three at once. Still, the prospect of killing Raúl Castro, the head of the military, prompted an almost immediate CIA response to the agency's Havana station: Tell the pilot to arrange an "accident."

The CIA offered $10,000, and possibly more if requested, to be paid upon completion of the job.

William Murray was the CIA officer in Havana in 1960 who worked with Cuban airline pilot José Raúl Martínez on a plot to kill Raúl Castro. In 1975, Murray wrote a memo to the CIA's inspector general outlining the plot and including documents from his exchanges with CIA headquarters. Many of those details have just been reported for the first time.

"It was a plot of opportunism that fell into the CIA's lap," said Peter Kornbluh, who runs the Cuban Documentation Project at the National Security Archive, a private research group in Washington. Kornbluh uncovered the details of the story in declassified government documents last month and published them on the archive's website.

This first plot was a rush job in the extreme. Martínez learned just three days in advance that he would be going to pick up Raúl Castro. As he was driving his car to the Havana airport for the flight, Murray was also in the car, discussing possible options.

"Murray only had one opportunity to convey the $10,000 offer and the mission that the CIA wanted the pilot to undertake," said Kornbluh.

Martínez raised the possibility of crashing into the Atlantic Ocean but knew this would be suicidal. How could he harm only one person on the plane?

"He actually said, 'If I die, will you make sure that my two sons have their college education paid for?' " Kornbluh said.

The CIA agreed to pay.

As Martínez went wheels up in Havana, it wasn't clear what he might do. Shortly after he left, CIA headquarters sent updated instructions to the Havana station: "Do not pursue. Would like to drop matter."

This was problematic, because now there was no way to contact the pilot.

These half-baked CIA plots to kill the Castros have been thoroughly documented and are part of the larger anti-communist crusade the U.S. government waged at the time in Latin America and elsewhere.

"It's like a combination of extreme American paternalism, combined with racism and disdain and contempt for Latin Americans. And so that drives their inability to see things," said professor Lillian Guerra, the head of Cuban and Caribbean studies at the University of Florida.

"The United States constantly discredited anybody who was an opponent of U.S. foreign policy," she added.

Hints of a plot

Kornbluh has researched these CIA schemes for decades with great zeal. He calls himself an "activist archivist." When asked how his day was going, he said: "I woke up at 5 o'clock in the morning dreaming of CIA assassination plots in Cuba."

A congressional investigation led by Sen. Frank Church, an Idaho Democrat, produced a voluminous report in 1976 on the CIA's activities around the world. The report included a brief, tantalizing reference to this first CIA attempt to kill one of the Castros, noting it targeted Raúl. But all the details were redacted.

It turns out that Murray, the CIA officer in Havana, wrote to the CIA's inspector general in a 1975 document he titled "Questionable Activities." Murray had reservations about his role, and his memo included original documents from his exchanges with CIA headquarters in the 1960 episode.

This information was redacted in the 1976 Senate report but was declassified in 2000. While details of the plot against Raúl Castro have been public since then, they were hidden among thousands and thousands of other declassified documents.

Then one month ago, as Raúl Castro prepared to retire, Kornbluh returned to the declassified documents that have been digitized at the National Security Archive.

He searched for possible stories about Raúl Castro that had not been fully explored, and that's when he came across the "plane accident" plot.

"Very few people are aware of the details of this incredible plot against Raúl Castro, a plot that deserves to be known in its entirety," Kornbluh said.

This brings us back to the pilot, José Raúl Martínez. So what did he do?

Ultimately, he delivered Raúl Castro back to the Cuban capital safe and sound. Afterward, he told Murray that he had no opportunity to arrange an "accident."

Then, a few months later, Martínez defected to the United States.

Meanwhile, Raúl Castro was the No. 2 figure in the Cuban government for decades. He became president when Fidel Castro stepped down in 2008, and Raúl Castro gave up his final post, as chief of the Communist Party of Cuba, in mid-April at age 89.

Kornbluh doesn't know for certain, but he suspects Raúl Castro had never heard the specifics of the airplane plot until now.

"I would imagine that Raúl Castro is reading these stories and looking at these documents for the first time and marveling over what the CIA tried to do," Kornbluh said.

The CIA was not deterred by this aborted effort in 1960. Shortly afterward, the agency began work on a much larger operation that also didn't go as planned — the Bay of Pigs invasion.