This book offers an examination of how the language of imperialism portrays anti-imperialism and rebellion as infection and pestilence, and how that language is "central to the management of empire and neoimperial formation." 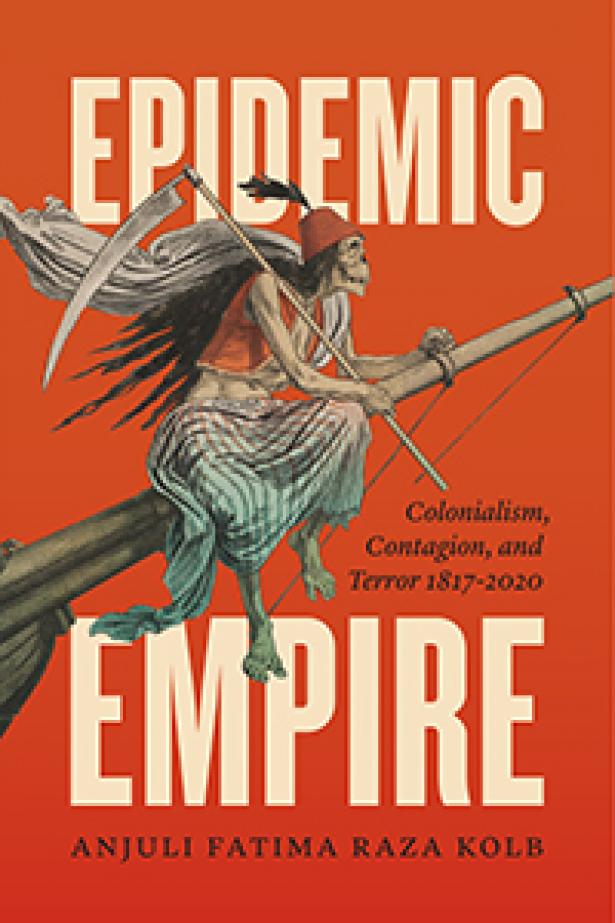 A poetics of contagion flourished throughout the COVID-19 pandemic. Language regarding literal epidemic measures (quarantine, isolation, personal protective equipment, hygiene, vaccines, etc.) intermingled with figurative language about nations and populations: orientalist claims regarding the source of the virus, migrants as vectors of transmission, quasi-Nietzschean interpretations of ‘herd immunity’. Anjuli Fatima Raza Kolb’s Epidemic Empire demonstrates that this ‘disease poetics’ has been part of global capitalism since its emergence. The thinking of contagion is bound up with how a global imperialism in development imagined insurgency alongside epidemics, how the study of counter-insurgency and the study of epidemiology were entangled. Hence, it is difficult to separate the political figuration of contagion from medical discourse.

Epidemic Empire ‘was going to press when the COVID-19 pandemic struck North America in March 2020,’ (xi) and thus only the preface and several edits were added to reflect on the conjunctural moment of its release. Because of this conjunctural moment that rendered the book’s subject matter more immediate, however, it will likely become one of this moment’s iconic works of academic literature. Since its research predated the pandemic, it wasn’t rushed to print like a host of other books dedicated to theorizing the pandemic. Moreover, the prose is lucid and, quite often, lovely: Raza Kolb presents us with a counter-poetics of the disease poetics she is excavating. But this counter-poetics is also a rigorous examination of its object of study, and Epidemic Empire is concerned with ‘two connected arguments.’ The first of these arguments is ‘that imperial disease poetics that casts insurgent violence as epidemic is grounded in narrative and scientific practices central to the management of empire and neoimperial formation.’ The second is ‘that a comparative historical study of the rhetorical commingling of colonial science and counter-insurgency can offer us urgently needed lessons for reading the global political and public health landscapes of today.’ (4)

These two arguments are explored by an examination of the topoi of imperial disease poetics, and the ways in which contagion was conceptualized from early imperialism to today, through both the archives of medical discourses regarding outbreaks such as cholera (studies that developed alongside a cartographic epidemiology in service of the British Empire) and popular literature reflecting these discourses and reinforcing common sense ideology. In tracing the relationship between the medical-historical archive (Malleson, Bryden, Bartlett, Babington, Snow) and key works of popular literature about plague and metaphorical plague (Kipling, Stoker, Camus, Rushdie), Raza Kolb is interested in ‘the conceptualization and epistemological framing first of world health and later of global health [that] emerge from the immunological crisis of colonial contact.’ (36) Such a conceptualizing and framing demonstrates the ways in which a scientific investigation overdetermined by imperial-capitalist logic contributes to this epistemological framing. Our thoughts about pandemic are configured by ruling class common sense: the way we think about contagion even now is influenced by the ways in which the investigation of contagion was bound up with the management of empire. A popular literary archive reflects this common sense.

Raza Kolb moves through her analysis of medical literature and its comingling with popular literature in a way that is quite breathless. What we witness, in her discussion of this archive, is the thinking and development of a disease poetics that is able to conceptualize the meaning of contagion but remains undermined by imperial power. Despite the importance of Snow’s mapping of contagion for medical science, for example, its ‘language of reconnaissance, invasion, and combat suggests an important overlap between colonial administration and the techniques of surveyorship […] [s]uch an overlap, it must be recalled, was always more than metaphorical, given the origin of cholera’s first epidemic outbreak in the movement of East India Company troops in Bengal.’ (80) Medical science in the service of empire, regardless of what truth processes it might establish, is still overdetermined by empire. Such overdeterminations are reflected in popular literature and ultimately reified.

The way in which this literature conceives of imperial nation-states and their colonies as bodies at risk of infection is a sign of this reification. Whether it be the infection of vampirism with the orientalist figure of Dracula, or the French Algerian city of Oran in Camus’ The Plague, where the absence of Algerians ‘allegorizes political violence through a chronicle of epidemic,’ (130) the anthropomorphizing of the social through this disease poetics demonstrates the development of medicalized tropes that would eventually be used to explain Muslim terrorism in the War on Terror. Raza Kolb reminds the reader of how the Pentagon screened The Battle of Algiers, emphasizing those scenes where Colonel Mathieu mapped the organization of FLN cells as an epidemiologist would map the spread of disease, as if a radical piece of third cinema could provide a key to winning the long war in Afghanistan and Iraq. The medical imaginary of the War on Terror further finds its expression in state-sanctioned literature such as The 9/11 Commission Report with its ‘healing narrative’, and The Senate Intelligence Committee Report on Torture with its ‘black-boxed infection sites’ which mimic ‘tropes […] of nineteenth-century cartographies of disease.’ (277)

On the one hand, these tropes serve to make the imperial social body appear to be otherwise healthy, naturalizing violence. Examining the work of Salman Rushdie, for example, Raza Kolb notes that ‘terror is plague––horrible, inhuman, amoral, cyclical, and nonagental. Counterterror is equally nonagental, procedural and prophylactic, like quarantine.’ (222) If terrorism is conceived as nonagental, an epidemic unleashed upon a supposedly peaceful imperialist reality, then the originary violence of conquest is conjured away; social causes for social phenomena can be dismissed because everything takes place in the realm of natural disaster, like the modern day equivalent of the miasma unleashed upon the Thebes of Antigone. On the other hand, however, these tropes are not separate from – and are in fact reinforced by – the very real and persistent collaboration between medicine and imperialism: ‘both the League of Nations and the United Nations recognized epidemic and global health alongside war as one of the most basic threats to freedom and lived existence in an increasingly globalized world.’ (224) Such a recognition is not neutral since it has resulted in the collaboration between public health organizations and ‘security organizations and branches of national governments to secure borders that are permeable in both material and rhetorically continuous ways to viruses and terror networks.’ (233)

To be clear, Raza Kolb is not suggesting that medical science itself is imperialist; she is definitely not advocating for a ‘left’ version of the anti-science discourse prevalent amongst contemporary anti-vaxxers or anti-maskers. Rather, her archival excavations are based on a very obvious point: medical science, like all sciences and all forms of knowledge production, is developed by people living in very real social circumstances who themselves are affected by social norms. Medical science as an institution, regardless of the fact that it generates truth procedures and empirically verifiable technologies, is definitely affected by the social relations within which it is embedded. (Which is why we now have vaccines for COVID-19, for example, but also why these vaccines are being denied to the majority of the global south.) In order to make this nuanced point, Raza Kolb mobilizes Fanon’s overlooked, Medicine and Colonialism, which discusses the way in which medical science and doctors are enlisted by colonialism, how this enlistment can be used to brutalize oppressed populations, how this brutalization generates suspicion of science, but eventually how a liberation movement generates an appreciation of medical science between the doctors and patients within an anti-colonial ethos. As Raza Kolb writes at the conclusion of Epidemic Empire: ‘This book is not against colonial science any more than it is against literature. But it is against the scientific packaging of counterinsurgency and the concurrent evisceration of social services, health equity, and care.’ (288) In discussions and interviews following the book’s publication, Raza Kolb has pointed out how the states and their ideologues that use disease poetics to justify imperialist violence have simultaneously, during this pandemic, refused to listen to medical professionals regarding actual medical measures necessary to care for everyone equally and prevent pandemic proliferation.

My only complaint with Epidemic Empire was that at times it leaned too heavily, especially at the end, into a Foucauldian methodology. While this leaning seems to make sense because of Foucault’s The Birth of the Clinic and the professed claims of biopolitics, I uphold the longstanding critique that devotion to a Foucauldian register is ultimately epiphenomenal and misses out on what a much more robust historical materialist analysis would generate. That is, a concrete analysis of a concrete situation, with attention to the ways in which imperialist ideology functions, would have better served Epidemic Empire than Foucault’s ruminations. After all, Foucault was incapable of theorizing colonialism and imperialism; this is a serious lacuna in his thought. Post-colonial thinkers who have castigated Marx for Eurocentrism have often dismissed the much more egregious Eurocentrism in Foucault, stretching his categories to accommodate a critique of empire when a vital terrain of anti-imperialist historical materialism already exists. To be fair to Raza Kolb, however, she also draws from this terrain through her aforementioned use of Fanon. Moreover, within academia Foucault (and similar chic radical theorists) is often unavoidable; he is something of an industry and what Gabriel Rockhill has called his ‘faux-radicalism’ seeped into the post-colonial tradition since the latter emerged during the same period when Foucault was first being overpopularized in western academia.

But this complaint is outweighed by the overall rigorous work demonstrated by Epidemic Empire. As I noted at the outset of this review, this book is a joy to read due to its lucid and often lovely prose. One passage about the blinding of Kashmiri insurgents still haunts me: ‘In this library of eyes, each bearing its own invisible wounds, the poet cleaves closely to the material in the metaphor of dark days, dark times. The shards or shrapnel of his experience will be the inescapable curse, settling in the rooh––the spirit or breath––accompanying the gift of sight because the ruin he speaks of seeing––the plague of nations, of nationalism, of communal violence, of military coup and exile––is not, or ought not be confined or quarantined to an over-there, the dark zones of war-torn failed postcolonial states, whose endemic violence periodically breaks out in worldwide pandemic.’ (232) In passages such as this, and in those points where Raza Kolb employs Fanon’s dialectical approach to medicine and colonialism, Epidemic Empire borders on the sublime.

Joshua Moufawad-Paul works as an adjunct professor at York University where he received his PhD in Philosophy. He is the author of The Communist Necessity and Continuity and Rupture.