She says Donald Trump crossed a line. But the Bush-Cheney administration didn’t? 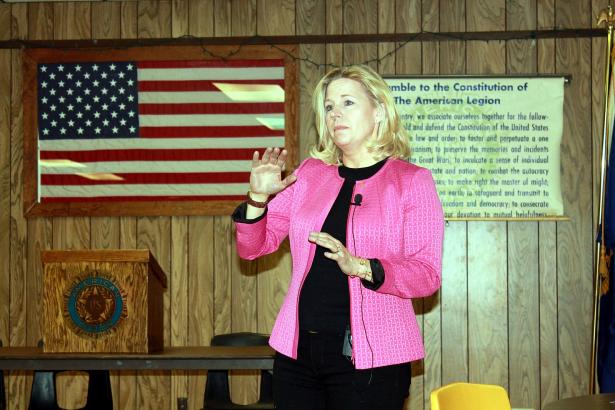 In recent days, Liz Cheney has become the hot celeb of the American media-political world. The conservative Republican representative from Wyoming is on the verge of being excommunicated from the House GOP leadership ranks because she has dared to speak an inconvenient truth: Donald Trump lost the 2020 election and his incitement of the seditious attack on the US Capitol “is a line that cannot be crossed.” Those recent remarks—coupled with her vote to convict Trump during Impeachment II—have provoked outrage from the Trump cultists within her party who are now demanding she be stripped of her post as the conference chair, the No. 3 spot in the Republican House caucus. And the betting odds are not in favor of the daughter of former Vice President Dick Cheney.

Cheney is undergoing a GOP version of a Soviet show trial. She has not demonstrated full and complete obedience to the party leader, so she must be destroyed. This is Orwellian. As the author of 1984 wrote, “In the end the Party would announce that two and two made five, and you would have to believe it.” And in that dystopian novel, poor Winston Smith is tortured at the Ministry of Love until he shouts two plus two equals five. Only then is he allowed to rejoin society. Cheney challenges Trump’s Big Lie—I won!—and refuses to whitewash the January 6 attack and Trump’s responsibility for it. Consequently, GOP Big Brother must squash her, and it looks as if her fellow House Republicans will vote to remove her from the conference chair. If they could defenestrate her, they probably would.

Let our journalists help you make sense of the noise: Subscribe to the Mother Jones Daily newsletter and get a recap of news that matters.

But for accepting reality and stating the obvious—Biden won, and it’s bad for a president to encourage a violent assault on Congress—Cheney (outside of Republican congressional circles) has won hoorays. Writing on CNN’s website, GOP consultant Scott Jennings observed that Cheney is “now positioned as a principled martyr.” In a recent Washington Post column, she wrapped herself in such noble garb, slamming Trump for “seeking to unravel critical elements of our constitutional structure that make democracy work—confidence in the result of elections and the rule of law. No other American president has ever done this.” And she noted, “The Republican Party is at a turning point, and Republicans must decide whether we are going to choose truth and fidelity to the Constitution.” Cheney also sharply pointed out that her boss, Rep. Kevin McCarthy (R-Calif.), the House Republican leader, said in January that Trump “bears responsibility” for the attack on Congress “by mob rioters”—but has shifted his position since then.

Cheney does these days look like a courageous truth-teller, defying the cultism and alternative-fact addiction that has taken over her Grand Old Party. But, in a way, she is the victim of her own success–that is, the success of her family. In particular, the success her father had in lying to the American public.

In the 21st century, American presidents have at least twice tried to shape the world with a lie of enormous impact. Trump attempted to demolish the nation’s constitutional order and retain power with his false claim that the 2020 election was rigged and Joe Biden did not truly receive more votes. As Cheney points out, this lie delegitimizes the essence of the American political system. And two decades ago, another Big Lie was concocted and pushed by a Republican president that resulted in profound (and lethal) consequences. Her dad was its main architect.

That was the untrue allegation that Saddam Hussein had weapons of mass of destruction and was prepared to use them against the United States. The Bush-Cheney administration used these charges to garner public support for the 2003 invasion of Iraq. Dick Cheney was the chief pitchman for this flimflam. In an August 2002 speech, he proclaimed, “There is no doubt [Saddam] is amassing [WMDs] to use against our friends, against our allies, and against us.” Soon after that, he publicly asserted that Saddam was trying to obtain aluminum tubes that could only be used for enriching uranium for weapons. And he also publicly cited a report that one of the 9/11 ringleaders had met with an Iraqi intelligence officer in Prague.

None of this was true. And Dick Cheney’s lies were not the result of intelligence failures. US intelligence over the previous year had assessed that Saddam did not have a worrisome WMD program. Government scientists had concluded that the aluminum tubes in question were not usable for weapon-grade enrichment. And the CIA had discredited that Prague report. Yet none of this inhibited Cheney and President George W. Bush. They spent months dishing out an assortment of false statements—including the untrue claim that Saddam was in league with al-Qaeda—to grease the way to war. They succeeded. Bush won the support of Congress and the American public for his massive blunder in Iraq.

The invasion of Iraq toppled Saddam’s dictatorship but it yielded a geo-strategic and deadly mess in the region. About 200,000 Iraqi civilians died in the ensuing years due to the war. More than 4,000 American soldiers lost their lives in the war.

One lesson of the Iraq war is that a big lie can work. Liz Cheney, who was deputy assistant secretary of state for Near Eastern Affairs during this stretch, supported the war—and has defended it ever since. (She co-wrote a 2015 book with her dad on US foreign policy.) She even insisted that one of the main lies of the Bush-Cheney fraudulent case for war—that there had been a significant connection between al-Qaeda and Iraq—was true. (She also hawkishly defended a sordid chapter of that sordid war: torture, saying it was “libelous” to call waterboarding “torture.”)

There was another odious lie that Liz Cheney also defended—or played footsie with: the racist conspiracy theory that President Barack Obama was born in Kenya. Asked about birtherism in 2009, she replied, “I think the Democrats have got more crazies than the Republicans do. But setting that aside, one of the reasons you see people so concerned about this, I think this issue is, people are uncomfortable with having for the first time ever, I think, a president who seems so reluctant to defend the nation overseas.” Without endorsing the conspiratorial and disproven details of this nutty notion, Cheney was providing moral support to its adherents. (Trump’s championship of this lie helped turn him into a right-wing hero and set up the foundation for his 2016 presidential bid.)

It is a good thing that a hardcore conservative like Liz Cheney has joined the opposition to the Trumpian authoritarianism that has fully infected one of the nation’s two major political parties. Most of the GOP base is beyond persuasion. A recent poll showed that 70 percent of Republicans believe Biden did not win the election legitimately. The denialists lost in the swamps of Foxlandia won’t be swayed by a Liz Cheney op-ed. But for conservative Americans who give a damn about Trump’s war on reality and the Constitution—unfortunately, a minority—Cheney’s current stance could boost their spirits and spine. And the fight to protect American democracy needs as many enlistees as can be mustered, on the left, in the middle, and on the right.

Still, Liz Cheney deserves hardly a cheer, for it ought to be remembered that Trump is pushing his Big Lie in the wake of other big lies—and that Cheney, her father, and so many other Republicans not so long ago did much to blaze the path for the dangerous political villainy she now decries.