Break the Fear Barrier and Speak Up for Palestine

Saying the Palestinian issue is ‘complex’ is no excuse for not speaking up against Israeli crimes.

May 11, 2021 Mark Muhannad Ayyash Aljazeera
Printer friendly
Break the Fear Barrier and Speak Up for Palestine Published May 11, 2021 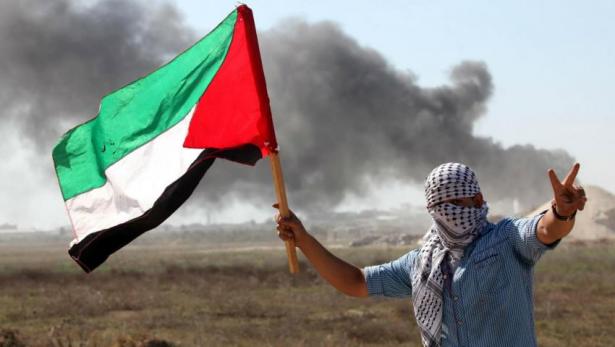 This uprising is led by educated Palestinian youth that demand attention , Getty

Scholars of social movements, civil disobedience, liberation struggles, and revolutions have long known that fear is one of the greatest barriers to overcome. For the oppressed to move from inaction to action, they must break this fear barrier.

In extreme cases, such as Palestinians living under Israeli settler colonialism, the fear is based on lived experiences of torture, imprisonment, maiming and killing, daily humiliations and dehumanisation, loss of income, livelihoods, homes, dignity, freedom, and rights.

These last few days, the Palestinian people across colonised Palestine have shown the world, not for the first time and not for the last, their deep and awe-inspiring courage in the face of this fear.

For decades, the Israeli garrison state, as Hamid Dabashi accurately describes it, with its massive apparatus of settler-colonial violence as well as its armed civilians have been creating and building this state of fear in the everyday lives of Palestinians.

I had a relatively privileged childhood in Palestine, but still, I am acquainted with this fear, which you learn, not just by witnessing or experiencing violence, but in the course of seemingly non-eventful and ordinary days.

As a child in the early 1990s, I attended the Freres School within the old city of al-Quds (Jerusalem). During recess, we would see armed soldiers patrol the top of the city walls, looking down on us the way that self-perceived superior beings look down upon a caged animal. And when we would leave school and walk down the roads of el-Balad el-Qadeemeh (the old city), we would regularly be confronted with armed Israeli civilians walking around with their guns out in the open, asserting their supremacy, reminding us that we ought not to look at them the wrong way or else.

On many of these walks, conversations between us children would turn to stories we heard about torture methods that the Israelis use, the beating a friend or relative took at the hands of Israeli soldiers, an armed Israeli civilian cursing and spitting on a Palestinian, the long imprisonment and suffering of relatives and friends. This is merely the background picture – and a relatively benign one at that, relative to Palestinian standards, and certainly things seem worse today than they were in those days.

Nevertheless, those days and stories pile up one on top of the other, along with experiences of violent acts and events, building and instilling in Palestinians a state of fear that we carry with us everywhere we go and move.

That fear barrier was instilled inside me from the moment I became conscious of the world as a child. And despite overcoming it now and again, it never disappears. Even after immigrating to Canada, after tasting some freedom, holding citizenship for the first time in my life, feeling somewhat protected by a state structure (very much a false sense of protection), that fear never leaves you. It did not take long for me to realise that in these Euro-American spaces, I had to be afraid of even speaking about Palestine.

The fear in Euro-America has a different basis though. Fear in those spaces is based on lived experiences of being censored, fired, disciplined, not hired or promoted, dragged through frivolous legal cases, defunded, harassed, intimidated, and silenced.

This fear has become so naturalised, so ubiquitous, that some people in Euro-American spaces seem to genuinely think now that they do not actually fear this fear!

Let me, first, be very clear: this fear is not the main barrier standing in the way of states like Canada, the United States, the United Kingdom, Germany, France, etc, placing pressure on Israel. These states and their political, academic, economic, and media institutions are on the whole strategically aligned with the Israeli state. These states and their institutions are actively participating in and driving the colonisation, exploitation, oppression, and settler colonisation of much of the world, as they have been for centuries.

But I want to speak here to people working within these institutions who genuinely want to transform them, to decolonise them, but yet are always quick to evade the question of Palestine and true decolonial liberation. From privileged politicians to academics to journalists to civil society organisers to artists, a litany of excuses other than fear is often proclaimed as to why they will not touch Palestine. A main feature of these excuses is the claim that the issue is “complex and controversial”.

Of course, it is perfectly normal to not know enough about a particular topic, issue, or question. There is nothing wrong with wanting to learn more before commenting or taking a position. Asking questions is a healthy exercise when you do not know.

But every topic is complex and controversial. How your food ends up on your dinner table is complex. But that does not stop the majority of people from talking about food production, distribution, how they want to shop ethically, and so on. The economics of sports is also controversial. But that does not stop millions of people from spending countless hours talking about player salaries, advertisement money, revenue sharing among the clubs, and so on.

Palestine-Israel is not unique in its complexity or controversy. And while most topics and issues are framed as complex and controversial for the sake of commencing a deepened entry into the topic, exploring its many dimensions, the statement that the issue of Palestine and Israel “is complex and controversial” serves instead as an end to the conversation. When it comes to Palestine, this statement is almost never the beginning of a quest for more knowledge and better learning. Rather, this statement is the extent of the learning process. It puts a stop to it. It ends the conversation by declaring a non-position on the matter.

When politicians, executives, journalists, academics, etc, proclaim this statement, their intended goal is for the question of Palestine to go away, to be removed off their desk. Why? In many cases, because they are afraid of the consequences that I have outlined above. This is what everyone admits and knows in private conversations, but almost never openly acknowledges. Therefore, what actually drives this non-positionality is the very fear that most people deny having.

The non-positionality of the statement, “it is complex and controversial”, is far from neutral. This statement indeed maintains the status quo by ensuring the continued toxification of Palestine and Palestinians in Euro-American public discourse.

Israeli propagandists are the only beneficiaries of a statement that posits for itself a non-position. Because non-positions are always ultimately concealment of reality. When you declare that you will not take a position, when you end the conversation because something is controversial and complex, you are declaring that the reality of the situation is hopelessly and infinitely indecipherable. You are declaring that you do not know what position to take because nobody knows the reality of the situation.

This statement thus declares that the reality of Palestine-Israel is unknowable, which is precisely the conclusion that Israeli propaganda is entirely comfortable with. Only the oppressed and colonised Palestinians and their supporters are attempting to communicate the reality of settler colonialism and apartheid to the world. Only they are making it knowable.

Israeli and Zionist propaganda in Euro-America and elsewhere is designed to conceal and hide that reality because it does not serve the Zionist political project. Therefore, a declared non-position that clouds reality and conceals it is in fact a statement of support for Israeli propaganda.

This does not mean that Zionism does not understand its own reality. In fact, within some Zionist discursive spaces, a space where, for example, Zionist settlers speak freely, as we saw in the most recent viral video, you will find a basic description of the brutality of that settler colonial and apartheid reality: “If I don’t steal your home, someone else will steal it.” They know that they are stealing, that they are there to eliminate and replace the native Palestinians.

It is time to say, enough: enough of this imprisonment, occupation, colonisation; enough of evading the issue; enough of this fear. Palestinians continue to break their fear barrier. If you have not yet done so, then, my dear reader, if you genuinely want to transform the world, then you will have to.

Mark Muhannad Ayyash
Associate Professor of Sociology at Mount Royal University in Calgary, Canada.
Ayyash is the author of A Hermeneutics of Violence (UTP, 2019). He was born and raised in Silwan, Jerusalem, before immigrating to Canada. He is currently writing a book on settler colonial sovereignty.
Subscribe to Portside