A community of homeless residents lives near Cob on Wood, surrounding the site. Advocates and some residents estimate the population of that community to be about 100 people. 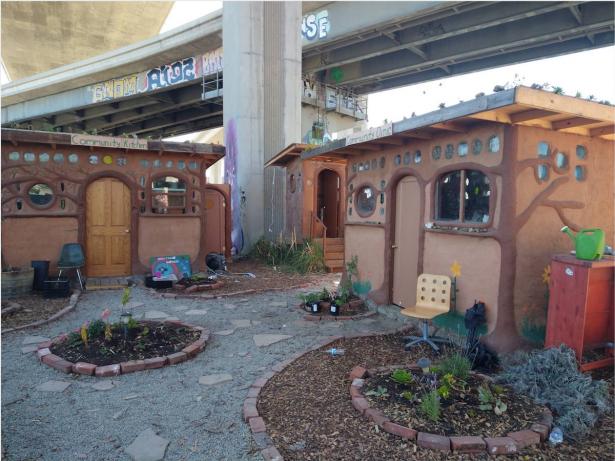 A community kitchen, clinic, toilet and shower made out of cob and wood sit under the 880 Freeway within a homeless community west of Wood Street in West Oakland,

Members of three organizations – Artists Building Communities, Essential Food and Medicine, and Living Earth Structures – have built a kitchen, clinic, free store, stage, toilet, oven, and shower with and for a homeless community near Wood Street in West Oakland.

Made out of wood covered in brown cob, the structures that house these facilities seem almost as natural extensions of the earth upon which they sit. Empty wine bottles serve as windows, and old discarded clothes serve as insulation. Sculpted images of trees decorate the structures’ surfaces and succulent plants sprout along the perimeters of their roofs.

Winding stone pathways connect the structures and are bordered by little gardens of herbs, greens, and flowers. The kitchen has a stove, sink with running water, shelving full of bread, and a refrigerator full of food. Herbs and emergency medical supplies fill the clinic. The shower’s water runs hot.

The project is called Cob on Wood. It sits on land owned by, west of Wood Street, and under the 880 freeway.

A community of homeless residents lives near Cob on Wood, surrounding the site. Advocates and some residents estimate the population of that community to be about 100 people. The area west of Wood Street in West Oakland that the community lives in does not receive regular sanitation service from the City of Oakland, and much of it is densely packed with abandoned vehicles and garbage.

With regular maintenance by those living inside and outside of the homeless community, the Cob on Wood site looks different from its surroundings, like a rose that grows out of a crack in the concrete.

“This was built through relationships with the community and came out of requests from the community,” said Xochitl Bernadette Moreno, co-founder of Essential Food and Medicine (EFAM).

EFAM started building relationships with Wood Street residents early in the COVID-19 pandemic by giving them juice, soups, and natural medicines made from local produce. Artists Building Community (ABC) also started early in the pandemic, when Annemarie Bustamante and some of her neighbors living in The Vulcan Loft apartments in East Oakland started building small wooden homes for homeless Oakland residents.

ABC has expanded now to include volunteers throughout the area, and they have built several of their homes in the Wood Street community. But the structures at Cob on Wood-look different from ABC’s homes.

ABC and EFAM came together to contract with Miguel Elliot of Living Earth Structures to guide the building of Cob on Wood structures using cob. The group benefited from Elliot’s experience of building cob structures for over 25 years in a variety of settings and locations, including parts of Central and South America, Africa, and Asia.

While the groups have followed Elliot’s construction guidance, they also followed nearby homeless residents’ service requests, whose first request was a kitchen. Elliot’s cob construction made the kitchen safe from catching fire, as the cob is fireproof.

Such precautions were necessary. Oakland’s fire department responded to almost 1,000 fires in homeless communities during fiscal years 2018-19 and 2019-20.

LeaJay Harper, who has lived in the Wood Street community for over seven years, now restocks the kitchen every few days and also cooks for herself and other residents.

“It’s been a challenge trying to keep food in the kitchen because people are definitely using it,” said Harper. “It’s made it so that folks who didn’t have the facilities at their own space to cook can have hot food every single day. A lot of people are gaining weight, which is a good thing.”

Harper works and meets closely with ABC and EFAM to plan food pickups. Other homeless residents have taken on roles in the community as well. A resident named Lydia, who lives in an RV near the community and is knowledgeable about medicinal uses of herbs, is the community clinic liaison. She helps spread information about ways residents can use the clinic’s herbs.

Raquel, a teenager who lives with her family in the Wood Street community, helps with outreach to inform other residents about Cob on Wood services and events. Another teenager, Sequoia, who used to live on Wood Street, is also part of Cob on Wood’s outreach team.

“I think being part of [Cob on Wood] is really amazing,” Sequoia said. “Most of my life I was homeless and being able to give back to the community now that I’m not on the streets means a lot to me.”

The idea for the community started in September of last year, and construction started in December. The project has been growing. These days, Moreno says about 50 people meet online on Wednesdays to formally plan and maintain the project.

On Sundays, the group meets more informally on site for construction, site maintenance, a pizza party, and an open mic. The vast majority of people involved with the project still live outside of the Wood Street community, but the word is spreading.

Cob on Wood volunteers go into the Wood Street community and hand out flyers about the project. On Sunday, April 18, they hosted an Earth Day celebration called “What’s Your Medicine?” with food, DJs, dance, and musical performances.

At least 100 people showed up to the event. One Wood Street resident who lives in a self-made home said he had never heard of Cob on Wood before but followed the sound of the music and found it.

Ashel Seasunz Eldridge, who co-founded EFAM, and performed at the Earth Day celebration with his band, Dogon Lights, said that Cob on Wood seeks to build on work that Wood St residents already are doing. During the Earth Day celebration, when Cob on Wood had a Town Hall to discuss how the project could sustain itself and better serve the community, five Wood Street residents took the lead, speaking to each other and the crowd through a PA system.

Those residents have been meeting weekly in another part of the Wood Street community.

“We were inspired by the meetings people were already having,” said Eldridge. “We thought, why not bring that to the town hall.”

One topic Wood Street residents spoke about was defending themselves and other people experiencing homelessness from displacement. It was something Cob on Wood organizers found pertinent, as they worry that the site, which sits on CalTrans owned land, could face displacement from that state agency.

A recent article in the San Francisco Chronicle cites CalTrans spokesperson RocQuel Johnson as claiming the agency plans to clear “abandoned vehicles and liter” from CalTrans land near Wood Street in May and June, claiming similar actions were executed on April 12 and  April13.

ABC founder Annmarie Bustamante was at the Wood Street homeless community on those days and claims CalTrans forced people to move themselves and their homes from the location they lived to an area more out of sight of a nearby street.

Abandoned vehicles, Bustamante claims, were not removed from the Wood Street homeless community but were moved to a separate area still within that community. She said the operation did not remove trash but displaced people.

Although this reporter asked CalTrans about the April 12 and 13 operations, the agency did not respond. But Johnson told the SF Chronicle that “[Cob on Wood] structures were placed on state right of way without a permit or without safety inspections,” and added that “CalTrans is currently evaluating the best course of action and has no immediate plans to remove the structures.”

Cob on Wood organizers is unclear about whether CalTrans will remove their structures. The state agency cleared homeless people off their land in Oakland on Sept. 21 last year and late January this year. During the January operation, a group of advocates, 10 of whom carried colorful shields, defended the self-made home of two Oakland residents living on the land bordering Mosswood Park and the 580 Freeway.

While nearly 20 of their neighbors cleared themselves from the CalTrans-owned land they were living on, the two residents never left the area, and their home was not dismantled.

Bustamante, who was at the January CalTrans operation supporting eviction defense, is also prepared to defend Cob on Wood if necessary. Defending space through direct action is a topic of steady conversation among those involved with Cob on Wood.

“If CalTrans does try to displace us at Wood Street without allowing for other adequate resources, there’s gonna be a fight,” said Bustamante.

Readers can donate to their gofundme campaign.