Kandist Mallett argues, "Our pre-pandemic lives are not sustainable. They weren’t good for our health or this planet. Let’s evolve past capitalism, past working our lives away, past destroying the planet for profit’s sake." 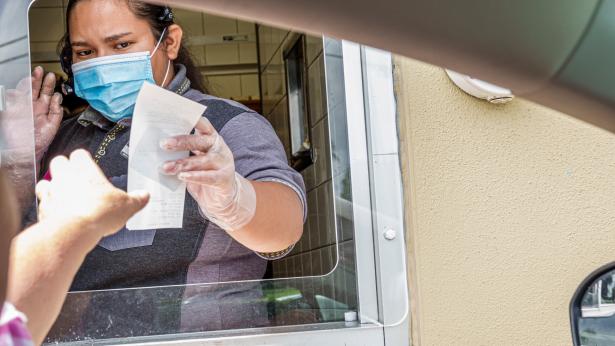 On the window of a barbecue restaurant in Chattanooga, Tennessee, a taped sign reads: “Due to lack of staff our inhouse will be closed until further notice.” Another sign on display at the restaurant reads, “We are short-staffed. Please be patient with the staff that did show up. No one wants to work anymore.” Over the past few weeks, several national and local news outlets have reported stories about businesses unable to reopen their doors due to the lack of job applicants. A Wall Street Journal report found that one of the reasons those surveyed gave for not returning to work was they were getting more money from unemployment programs. They also mentioned fear of contracting COVID and lack of child care.

This is supposed to trigger an alarm, especially in a place like the United States, whose national identity is based upon being the home of hard workers and free enterprise. President Biden has said repeatedly that Americans “aren’t looking for a handout” and that we want to work. This is all a part of the American mythology, that we all enjoy the feeling of a good, long day's labor, and that America was built on this tenacity and industry. Though this platitude is often repeated, the truth is that America was built on exploitation. The country we know was made possible by the enslavement of African people, seizure of land and forced displacement of Native peoples, and a capitalist system that forces people into working long hours for low pay to provide for basic needs like food and shelter.

The problem, if you see it as one, isn’t that people are refusing to work because of unemployment benefits and federal assistance, but that wages are so low people are getting more money from the government dole. If you’re expecting people to willingly opt into being exploited for such pathetic wages then you are clearly mistaken about what people in this country truly want. After receiving several stimulus checks, weekly unemployment payments, and in some cases rental assistance, perhaps some Americans have decided they don’t really hate socialism after all.

In a push to get capitalism back to normal, the country’s elite are in a propaganda war to let us know not to get things twisted: America is very much still about pulling oneself up by their bootstraps. In response to Republican lawmakers’ claims that the extra $300 in temporary weekly unemployment aid is making people not want to work, Biden offered a threat. “We’re going to make it clear that anyone collecting unemployment who is offered a suitable job must take the job or lose their unemployment," he said at a recent press conference. How the president defines suitable is unclear, but given his decision to back down from aggressively pushing for a federal $15 minimum wage, it’s safe to say we may not have the same definitions of suitable. I find it astounding that politicians whose net worth is in the millions have the nerve to say what’s suitable for people to whom an extra $300 a week is literally life-changing.

The U.S. Chamber of Commerce also weighed in, saying they wanted an immediate end to the unemployment federal aid. In a statement, executive vice president and chief police officer Neil Bradly said, “The disappointing jobs report makes it clear that paying people not to work is dampening what should be a stronger jobs market.” This kind of response is interesting because for years we’ve been told that we need to prepare for our jobs to be taken by robots and artificial intelligence, only to hear now that an extra $1,200 a month in assistance can weaken the job market.

Over the course of the pandemic, we’ve come to understand even more how important individual labor is required to keep life “normal.” The year would have looked a lot different without essential workers who were willing to risk their lives to stock grocery stores and deliver packages from Amazon. Despite how much the American self-mythology loves to make it seem like we should be thankful for businesses and the employment they offer, those businesses need our labor to be able to function.

For decades, CEO salaries have increased while worker wages have remained stagnant. During the last year, corporate executives’ multimillion-dollar salaries ballooned while workers' pay decreased, according to a report from the Institute for Policy Studies, a progressive think tank. This is happening in an environment where the average cost of living is rising and the number of people experiencing homelessness and food insecurity is on the rise. It seems clear that we are having the wrong conversation, and that instead of trying to coerce people into taking low-paying jobs, we should recognize the harm our current economic system inflicts every single day.

If employers want people to work, make it worth it for them to do so. The free market loves competition, right? Then businesses should be able to compete with unemployment benefits from the government. And if they can’t, isn’t that just the magic hand of the market doing its thing? Let’s call it a public option and give people a weekly payment, something equal or greater to what they’re receiving from unemployment insurance with the added federal assistance.

In a way, unemployment insurance with the extra federal aid has shown us what life could be like if we had a universal basic income. A July 2020 report from the Urban Institute, a think tank focused on economic and social policy, found that the combination of an extra $600 weekly for unemployment benefits in the early months of the pandemic, combined with the expansion of food stamp benefits and stimulus checks, was projected to keep more than 10 million families out of poverty. So why not make this a standing policy and expand it to make sure that undocumented families are not excluded?

We shouldn’t be required to be workers. Working in the labor market should be an option we can choose to opt into — granted if we determine it is worth our time and added income.

Our pre-pandemic lives are not sustainable. They weren’t good for our health or this planet. Let’s evolve past capitalism, past working our lives away, past destroying the planet for profit’s sake. Many of us work only because we’re made to because we need the money to pay for things like housing and medical care that shouldn’t be commodified in the first place. There was a lesson to be learned over the past year: Life is fragile, the future is not predictable, and normal is whatever we make it. We can change, we can adapt, and we must if we’re going to survive the devastation that the climate crisis is already delivering.

Normal doesn’t have to be an eight-hour workday, an eviction notice on your door if you can’t pay rent, and an empty fridge because you can’t afford groceries. Normal can be weekly government financial aid, universal health care, and choosing to work from home if you want to, or not at all.