Doctors, bank clerks, builders and teachers abandon work to join demonstrations. “This is the start of a new era, one united aim for all Palestinians, wherever they may reside. Our demand is that we want to live freely and in peace." 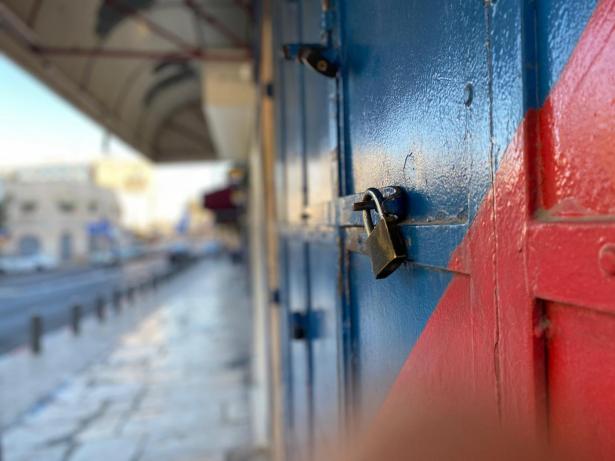 The stone streets of Jerusalem’s Old City are silent. Shutters with peeling paint are firmly rolled down.

In Haifa, Jewish cafes are serving coffee. Beside them, Palestinian-run businesses have their lights turned off.

Across Israel, the clanking, sawing and drilling sounds from construction sites have disappeared. There are no Palestinian labourers manning the scaffolds now.

Millions of Palestinians have gone on strike.

In Israel, occupied East Jerusalem and the West Bank, Palestinians have downed tools or stayed away from their desks in just the latest example of pan-Palestinian solidarity following days of Israeli crackdowns and ferocious bombing on Gaza.

"I cannot recall, for years, Palestinians of all backgrounds, factions, Muslims, Christians, atheists, being united under one goal," Inas Abbad, a political science researcher and activist from East Jerusalem, told Middle East Eye.

"This is the first time since the Second intifada that Palestinian parties, together with all Palestinians of the occupied territories of 1948, have issued a joint statement and a unified call for a strike."

Schools, businesses, shops and official institutions have heeded the call, first raised on Sunday by the Arab Follow-up Committee, which coordinates between political parties inside Israel.

The Palestinian Authority (PA) in the occupied West Bank, too, encouraged participation in the action, labelled the Karameh (Dignity) Strike.

Around 1.93 million Palestinians are citizens of Israel, a fifth of the country’s population. In the West Bank and East Jerusalem are some three million, some of whom travel over to Israel every day to work on construction.

Though the strike has shut down large parts of all of their economies, there is no quietude.

Thousands of Palestinians are protesting in cities and towns across historic Palestine, raging against Israeli raids in al-Aqsa Mosque, attempted expulsions in East Jerusalem’s Sheikh Jarrah, deadly far-right violence in Israel and a punishing bombardment in Gaza that has killed 212, including 60 children.

In Haifa, a northern Israel city known for its mix of Jewish and Palestinian citizens, the Palestinian flag has been raised on several buildings, and residents have taken to the streets chanting in solidarity.

"My feeling is that this strike is important to each and every one of us, so that we can put a stop to this brutality and the constant assault on us in all walks of life," Hazar Hijazi, a 45-year-old education therapist, said in Haifa.

"Enough attacks on people in Gaza, the West Bank and Jerusalem, Lod, everywhere. Enough attacks on our homes, our daily life and displacement. The displacement and erasure of our existence on our land needs to stop, we’ve experienced enough repression, arrests and threats to our homeland and our futures."

Israeli forces have violently cracked down on Palestinian protests in Jerusalem, both inside the Old City and around the Damascus Gate.

Israeli police beat, pepper sprayed and removed the hijab of MEE correspondent Latifeh Abdellatif while she was filming the detention of a young boy.

Palestinians on the scene stepped in to protect Abdellatif, scuffling with the Israeli officers. A number of them were arrested as a result.

Fatima Khadir, an activist from Jerusalem at the Damascus Gate, underlined the feeling of unity across all Palestinian communities.

"We gave so many sacrifices during this past year, many of our children were killed in Jerusalem and Gaza, and we don't want to return to the past. Our children and families are being destroyed and have no chance of living in dignity under occupation," she said.

"We have no one.. I really hope that the international community stands with us. Shame on the Arab countries that normalise with Israel and see the Palestinian women being beaten by the army. Biden is a Zionist, the arms that are used in Gaza are coming from the US."

Nashwa Amir, a resident of Gaza city, said the strike could impact Israel's economy as it grapples with fallout of the coronavirus pandemic, and force it into negotiations.

"The strike is aimed to expressing unity in the Palestinians cause and struggle, and show an absolute rejection of Israeli attempts to deal with central issues of the conflict separately," she said.

Shabtai, a Jewish Israeli in his 60s in the Jerusalem neighbourhood of Baqaa, has had to take the day off because none of the Palestinian labourers working on his construction site turned up for work.

“I hope this does not last. The longer the Arabs strike, the more money we will lose because the building projects will be frozen,” he told MEE.

“I’ve called them several times to try and convince them to come to work. Even the ones that want to work say they cannot because of the shame and popular pressure.”

In the West Bank city of Ramallah, hundreds of Palestinians have gathered in the main streets and squares.

The crowd includes teachers, bank clerks and doctors, repeatedly chanting “we will return to Haifa, Jaffa, Ramle and Lydd”. Anger is palpable over the international community and Arab states’ inability to stop the bombing of Gaza, where today the health ministry said Israel is preventing the International Committee of the Red Cross (ICRC) from accessing certain health facilities.

"This is the start of a new era, one united aim for all Palestinians, wherever they may reside. Our demand is that we want to live freely and in peace,” said one protester.

Demonstrations have also begun in Bethlehem and the Bedouin village of Tulkum. They are expected to be followed this evening by ones in Jenin and Nablus.

Israel forces shot a Palestinian man dead in Hebron on Tuesday morning. The military said Fayyad Zahda, 31, was carrying weapons as he approached soldiers near a settlement.

East of Ramallah in the town of Silwad, Shahla Hammad, 60, told Middle East Eye that the nine-day bombing campaign on Gaza has resurfaced traumatic memories.

“The air strikes bring back memories of the West Bank during the Intifada, when people were opposing the Israeli attacks,” she said.

“Today’s air strikes, just like the air strikes during the Intifada, unite us as Palestinians and brings us closer together and in cohesion.

A group of experts with the UN Human Rights Council (UNHRC) urged the international community to unite in calls for a ceasefire in the Gaza Strip and Israel on Monday, and to then work to end Israel's occupation of Palestine.

The experts said that "the denial of collective and individual rights of the Palestinian people" was the "underlying source" of the conflict between Israel and Palestine.

Lubna Masarwa is a journalist and Middle East Eye’s Palestine and Israel bureau chief, based in Jerusalem.

Shatha Hmmad is a Palestinian freelance journalist. In June 2020 she won the New Voice award at the One World Media Awards for her reporting from the West Bank.

Latifeh Abdellatif is a Palestinian journalist from Jerusalem.

Founded in April 2014, Middle East Eye is an independently funded digital news organisation covering stories from the Middle East and North Africa, as well as related content from beyond the region.