How Privilege and Capital Warped a Movement

"Capitalism is dependent on inequality, on an underclass. If the model is profit over everything else, you’re not going to look at your policies to see what is most racially equitable.”

May 26, 2021 Talmon Joseph Smith The New York Times
Printer friendly
How Privilege and Capital Warped a Movement Published May 26, 2021 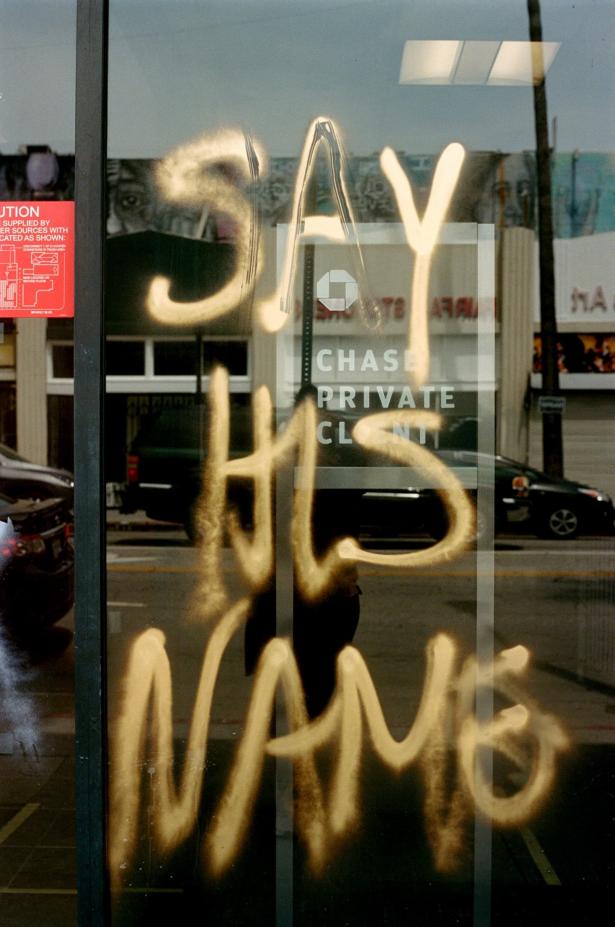 On a humid, windless night several years ago, I was driving my parents’ S.U.V. through the oak-covered back streets of my hometown with four teenage friends. At an empty intersection, I reflexively began turning left before spotting the no-left-turn sign on the traffic light above. I jerked the wheel right, crossed the intersection and headed for the U-turn lane.

Before my friend riding shotgun could even finish joking about my driving, we were surrounded by two blaring cop cars that had been waiting in the shadows nearby. Two officers, their hands placed near the weapons on their right hips, ordered me to lower my window. I did so in a numb state of shock, knowing I was Black, we were underage and there were unopened beers and a bud or two of leftover marijuana in the vehicle.

But within moments the officers noticed the back seat passengers, my good friends, two young, well-dressed blonde girls. The officers lowered their hands and furrowed their brows. “Who’s your daddy?” the lead officer asked me with a grimace. “What’s he do?”

I nervously told him: a lawyer. Then, he asked us where we went to school. We told him: Ben Franklin, a “good” magnet school. With that, he asked me and my guy friend to step out of the car. He cuffed us, patted us down, then shrugged: “You’re not worth the paperwork.”

They took the weed morsels, the Budweiser, released us, gave us a ticket and told us to go home.

Last month, a police officer shot and killed a 20-year-old Black man, Daunte Wright, during a traffic stop in Brooklyn Center, Minn. — not far from where George Floyd was killed by police 11 months earlier, after being arrested on suspicion of using a counterfeit $20 bill.

The fatal shooting of Mr. Wright was a personal reminder of how my own traffic stop by the police might have gone much differently, but for those seconds when my friends’ whiteness and then my own class privilege were revealed; how unfairness is both arbitrary and tiered.

His death was also a harsh reminder for millions of people of how police violence persists unabated, despite the supposed “summer of racial reckoning” last year following Mr. Floyd’s death. There are so many people who now question whether there was a true reckoning that, in certain circles, the term itself is used with half-joking disdain.

Thousands of large multiracial protests led to relatively modest changes compared to the lofty, paradigm shifting possibilities originally floated. Support for Black Lives Matter waxed only to wane months later. Confederate monuments were removed, but a new racialized Lost Cause took hold: the attempts to subvert the 2020 presidential election, which countless prominent Republicans falsely claim was stolen by a “woke mob” cabal, their elected allies and a diverse electorate.

All in all, it seems there was a racial reckoning — it was just disproportionately experienced by privileged Americans. Talk of social justice efforts and antiracism reached new levels of influence in the Zoom-layered corridors of the intelligentsia, corporate America and other upper-middle-class or elite-controlled institutions. Yet this reckoning often didn’t have ambitions for systemic change as much as it concerned itself with matters like representation, diversity, promotion and renegotiating the terms of corporate social responsibility. (And instead of uplifting, say, Black women’s voices it continued to elevate those of men and other women of color.)

It’s been an amorphous project, sometimes laudable and, at other times, awkwardly disconnected from the original, grass-roots critiques focused on policing, criminal law and how injustice is highly concentrated in financially divested communities.

Protest leaders didn’t march last summer to widen the trend of Black Lives Matter signs in tree-lined progressive neighborhoods, where Black neighbors are often conspicuously absent because of classist zoning laws. While many cultural shifts have been welcome, it’s not clear that people were protesting for things like greater demographic variety in the ads, magazine covers or entertainment that we consume.

And the cause of the marches certainly wasn’t to win vague news releases from corporations about solidarity and commitments to fight for equity, which in hundreds of cases failed to include robust follow-up. But that’s, largely, what America got.

Less than a month after testimony began in the trial of Derek Chauvin for George Floyd’s death, at least 64 other people were killed by American law enforcement, with Black and Latino people making up more than half of the dead.

“This past year wasn’t a win,” said DeRay Mckesson, an activist, podcaster and co-founder of Campaign Zero, which pushes for policies intended to reduce police brutality. “There were important narrative shifts and symbolic shifts. The police also killed more people in 2020 than in every year we have data except for 2018.”

He paused to praise some “nice” changes, including the rollback of racially insensitive products and how Band-Aid is diversifying the skin tones of its bandages, but added, “All these things are overdue and none of them is structural change.”

In 2019, a Human Rights Watch report found strong evidence of racial bias in policing. Yet it also revealed that a significant share of the disparities are explained by “concentrated policing in high poverty neighborhoods, which are more frequently communities of color.” Its authors gently ask if policing is “a proper response” as opposed to “addressing the problems” in those places with greater resources.

Mr. Mckesson was one of several people I spoke to this week who are close to a fractious class tension that has heightened over the last year: the divide between the slow, hard struggle against poor policing and social injustice in the communities most afflicted by those troubles, and the dizzyingly quick pivot toward antiracism vocabulary and posture in certain white-collar workplaces and industries. (Even the C.I.A.)

Arisha Hatch, the vice president and chief of campaigns at the nonprofit Color Of Change, which consults directly with large private and public institutions about social justice initiatives, called it “the tension between some of the very performative and visible things that happened in the aftermath of George Floyd’s murder versus how, or whether, folks have continued to show up and actually make real changes.”

According to the philanthropy-tracking organization Candid, the majority of dollars contributed to racial equity causes in America since 2008 were given within several weeks of Mr. Floyd’s death. That includes Apple, which announced a $100 million “Racial Equity and Justice Initiative” in 2020. But as the Verge has reported, that’s just 0.18 percent of the company’s 2019 profits — or put another way, theoretically, Apple “could have made its entire $100 million back the same day it announced the initiative.”

Color of Change is currently pushing big name companies to take up “racial equity audits, sort of in the same way that companies do environmental impact audits,” Ms. Hatch explained. Publicly disclosing them, she said, could “compromise” the effort as talks are continuing.

Many powerful companies that view themselves as progressive continue to actively lobby against the sort of federal tax increases that are needed, under current budgetary norms, if greater physical and social infrastructure investments are going to be made in underserved communities of color. And those communities are aggressively policed, in part, because many residents are stuck with the stresses and social disorder that scarcity creates and some have to turn to “informal economies” to get by, according to journalists and researchers like Dr. Steven Thrasher, author of “The Viral Underclass: How Racism, Ableism and Capitalism Plague Humans on The Margins.”

The Fortune 500 tier of Corporate America — which recently earned mainstream plaudits when more than 100 chief executives took the step of speaking out against assaults on voting rights — still continues to suppress the wages of their working class employees, who are disproportionately Black, in service of consistently boosting revenues.

All of this invites the question of why this reckoning seems so wound up about, and somewhat dependent upon, the social whims of private companies, which almost by definition will only accomplish so much. Influential nonprofit employees will say, mostly off-record, that it’s because these firms have gobs of money and power — and because governments at all levels have been too gridlocked to do much of anything.

When asked why social justice discourse in America has drifted into a scattered set of culture wars and inclusion debates, Ms. Hatch told me that in addition to such outgrowths (positive or negative) being natural, “diversity is often an easy place to start for people,” as it’s less likely to induce political backlash. For many executive managers, it feels more directly within their power.

Another potential reason is disagreement among activists over which specific goals any reckoning should aim to achieve, such as how, in practice, to redesign policing. “In my 10 years or so reporting on this, the technical solutions are not working,” Dr. Thrasher said, referencing the addition of more body cameras, the push for more Taser use instead of guns, the bans on maneuvers like chokeholds and more.

Some think decreasing the use of and funding for policing is an overall solution, if not a terribly popular one. Others, including Mr. Mckesson, think that defunding is well-intentioned yet vulnerable to reversion the moment there is a panic about spikes in crime. Regardless, fully weeding out officers prone to prejudice and brutality may prove unachievable.

The public discourse about where to go to next is just as fraught in academic and media spheres where, for some thinkers, the project is tinged with existential discomfort.

Because news cycles about racial upheaval can bring notoriety, “There are some ways for people in our class that — there are professional benefits,” Dr. Thrasher said. “I sold my books during this time, and we are often paid to share our opinions about things and to fund our research, which is good, but things aren’t changing a lot for people economically down the ladder.”

While being interviewed last summer, Ms. DiAngelo opened up in a telling way: “Capitalism is so bound up with racism. I avoid critiquing capitalism — I don’t need to give people reasons to dismiss me. But capitalism is dependent on inequality, on an underclass. If the model is profit over everything else, you’re not going to look at your policies to see what is most racially equitable.”

It’s a model that, whatever her misgivings, currently works for antiracism celebrities like Ms. DiAngelo and the businesses she gives cover. Frankly, it may benefit the multiracial set of white-collar Gen Z and millennial employees like me, entering workplaces more woke and attentive to our feelings than ever. But that model, without reform, doesn’t work for most working people of any color — or the more than 1,000 people killed each year by police since 2013.