The Tulsa Massacre: Remembering the History of 'Black Wall Street'

The story of prosperity of Black communities in Tulsa, Oklahoma is incomplete without discussing their roots. 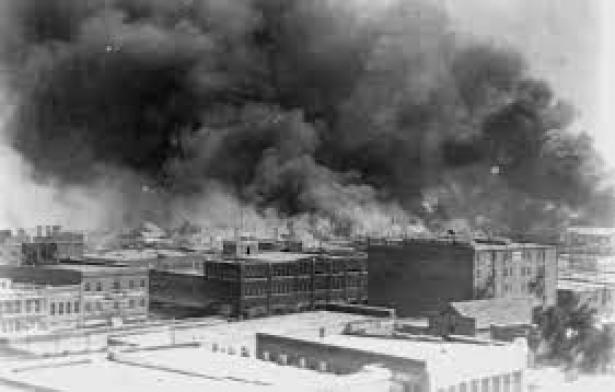 When HBO's TV series Watchmen (2019) and Lovecraft Country (2020) splashed across our screens, recreating the historical event now known as the Tulsa Massacre, Americans of all races were flabbergasted that a story so brutal, so significant had been seemingly lost to history.

Few had known the details of the mass killing of Black people by white mobs in what at that time was thought to be the wealthiest Black community in the United States.

After the collective shock, multiple projects were born from originators such as NBA superstars LeBron James and Russell Westbrook, as well as Dream Hampton (executive producer of the documentary Surviving R Kelly), all aiming to tell this story of Black economic success torn asunder by white racism.

But as is often the case, history is more complex than it seems. Why were there so many African Americans in Tulsa, Oklahoma at the turn of the 20th century? Why were they able to become so successful in a period of time, the late 1800s and early 1900s, known for the collapse of Reconstruction and the rise of Jim Crow?

As I discuss in my book, I've Been Here All the While: Black Freedom on Native Land, the story of the Tulsa neighbourhood known as "Black Wall Street" is incomplete without the knowledge of its inception as a Creek Indian town, populated by the Black former slaves of Creek women and men. The freedpeople used the land they had received through the American government to build a prosperous life for themselves, attracting African Americans from the United States who built upon the existing Black-Native landscape.

Today marks the 100th anniversary of the massacre and it is worth getting its broader history right as we celebrate our new awareness of it and its unfortunate continued relevance to our modern moment.

In the late 1820s and early 1830s, when members of the Cherokee Nation embarked on their now-infamous "Trail of Tears," their forced dispossession from the lands in Georgia, Alabama, North Carolina, and Tennessee that Cherokee people had called home for millennia, they were not alone. A small number of these tribal members brought with them enslaved Black women and men, who helped ease their burden, performing physical labour and other tasks.

By 1860, these enslaved people would make up approximately 15 percent of the Cherokee Nation. Members of four other slaveholding Indian nations—the Creek, Chickasaw, Choctaw, and Seminole Nations—made a similar journey to what was then known as Indian Territory (part of modern-day Oklahoma).

After members of all five nations fought on both sides of the Civil War, in 1866, the United States retaliated by forcing these nations to free enslaved people, provide them with all the rights and privileges of citizenship, and give them land allotments.

Creek freedpeople (those formerly enslaved by Creeks) settled in various places, many staying in what would become Tulsa to create towns and communities, some all Black and others interracial. In the late 1890s, oil was discovered by white Americans and Tulsa increasingly became a hub for speculators, bringing many American settlers.

As free people, Creek freedpeople voted in tribal elections, served as tribal representatives, and built schools and churches for themselves. At the same time, in the United States, after the highs of the 1870s, African Americans found themselves with decreased federal support in the realisation of their right to vote and live unmolested. When they looked West, they saw the land, annuity payments, and rights Black people in Native nations had, and they wanted it for themselves.

They came in droves, brought by newspaper editorials, advertisements, and in-person appeals by town promoters. Per the 1894 and 1910 US Census, between 1890 and 1907, the Black population of Indian Territory increased from 19,000 to more than 80,000. Their presence made Oklahoma the American state with the most towns created and populated by African Americans, referred to as "all-Black towns", While life was not perfect, as Black southerner Mildred Robertson put it, "my people [formerly] lived down at the bottom of Mississippi close to Louisiana… they had a little more freedom in Oklahoma."

Some Black families made it big, like titan and serial entrepreneur and financier O.W. Gurley, while others established comfortable middle-class lifestyles for themselves, catering to their fellow Black Tulsans with auto repair shops, grocery stores, rooming houses, and dentists' offices, among other businesses, creating one of the wealthiest Black locales in the country—hence the term, "Black Wall Street."

Some white Tulsans did not like this, and jealousy was clearly present, though racial violence was not a huge issue until after Oklahoma statehood in 1907. In 1921, what began with a Black teenager named Dick Rowland sharing an elevator with a white woman, prompting her to scream, ended with white Tulsans, including law enforcement, burning down buildings and indiscriminately shooting women, men, and children; Dick Rowland was the spark, but there was much kindling that preceded it.

African Americans flocked to Tulsa because of the lives and opportunities they saw Creek freedpeople and other Black people formerly enslaved by Indians enjoying. In Indian Territory, they were free from some of the reach of white supremacy in a space where tribal governments reigned. This was the specific context that made Black Wall Street possible. But the Tulsa Massacre was a grim reminder that wherever white settlers went, so did their anger at Black success and really, Black existence.

Alaina E. Roberts is Assistant Professor of History at the University of Pittsburgh.