A progressive tax system is one of the few tools we can deploy to slow and reverse the growth of billionaire power. 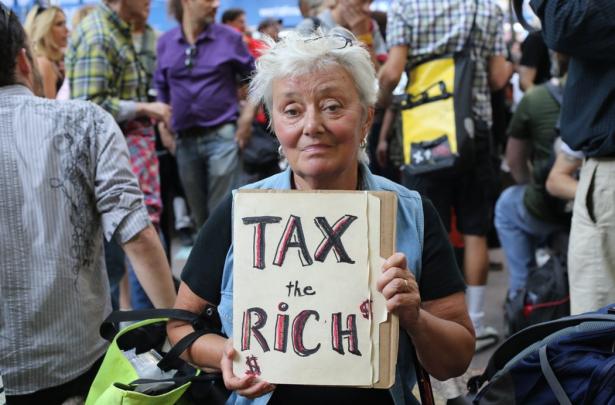 The Internal Revenue Service (IRS) is the branch of government Americans most love to hate. Yet strengthening the much-maligned IRS may hold the key to spurring economic recovery, reducing inequality and restoring our democracy.

President Joe Biden’s ambitious American Jobs and Families Plans, detailed in a joint session of Congress on April 28, would fund much-needed investments in infrastructure, jobs and families —  all paid for with higher taxes on the wealthiest among us.

But higher tax rates are only as good as the mechanisms that get people to pay them. And right now, those mechanisms are sorely underfunded.

In fiscal 2020, 55 of the nation’s largest corporations — including FedEx, Nike and Archer-Daniels-Midland —  paid no federal corporate income tax, according to the Institute for Taxation and Economic Policy.

While most of us have our taxes automatically withheld from our paychecks, these global corporations are allowed to play shell games with their income and assets. The super-rich hire an army of “wealth defense” professionals to expand loopholes, dodge the payment of taxes, stash wealth, and lobby for weaker tax enforcement.

To make them pay their fair share, we desperately need a stronger IRS. But the billionaire wealth defense industry has teamed up with Republicans in Congress to demonize and defund the tax authorities on the beat.

Since 2010, the IRS has lost roughly 18,000 full-time positions, primarily due to Republican budget cuts. With these cuts, it has lost the expertise required to “follow the money” and unravel the complex tax dodges that have proliferated in recent years.

Now, the priorities of the IRS are totally misdirected. You are four-times more likely to get audited if you use the “Earned Income Credit” — a tax break for working families — than if you’re a billionaire using a “Grantor Retained Annuity Trust.”

This is why the “tax gap” between the amount owed and the amount collected has expanded so dramatically. IRS commissioner Charles Rettig told Congress in April that the gap may be as large as $1 trillion a year.

To pay for his investment program, President Biden has proposed restoring higher corporate and individual tax rates and taxing millionaire income on capital gains at the same rate as wages. That’s good.

Even better, Biden proposes to spend $80 billion over the next 10 years to help the IRS enforce existing tax laws — a move his administration says could raise $700 billion.

Now more than ever, we need robust public investments in infrastructure, green jobs and for working families. Emerging from the pandemic, we must boldly act to reverse the growing inequalities that are tearing apart the fabric of our nation. A progressive tax system is one of the few tools we can deploy to slow and reverse the growth of billionaire power.

But we won’t make progress in reducing inequality and raising revenue unless lawmakers decide to shut down the hidden wealth system. The first step is to invest in enforcing the existing rules on wealthy taxpayers.