James Haslam, Leader of the Progressive Advocacy Group Rights and Democracy, To Step Down

“It’s been quite the roller coaster of a historical period to be having an organization called ‘Rights & Democracy,’” James Haslam said. 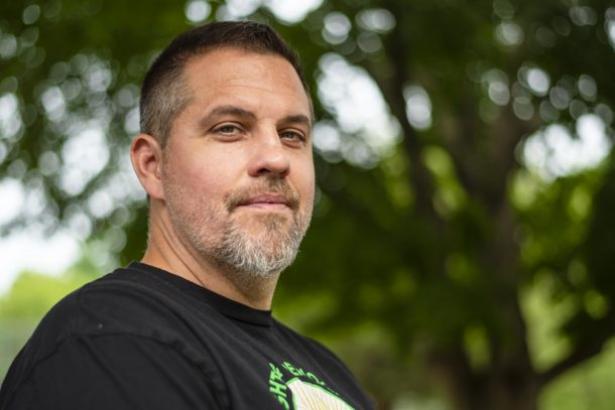 James Haslam, a longtime Vermont organizer and activist, plans to step down next year from the progressive political organization he founded six years ago.

Rights & Democracy is an advocacy group that engages in grassroots organizing, as well as candidate recruitment and training, in Vermont and New Hampshire. Since its formation in 2015, the bistate organization has grown to more than 20 staff members with chapters in multiple Vermont communities. It has been involved in an increasing number of election campaigns.

Haslam, who serves as executive director, said he expects to leave the organization this winter in a position of strength after a chaotic rise.

“It’s been quite the roller coaster of a historical period to be having an organization called ‘Rights & Democracy,’” he said.

The organization, according to Haslam, was born out of defeat. In December 2014, then-Gov. Peter Shumlin announced his long-promised plan for a single-payer health care system in Vermont was no more. The governor said the cost of the proposal precluded it from becoming a reality and called it “the biggest disappointment of my public service so far.”

It was also a disappointment to Haslam, who spent his formative years in Groton, Massachusetts, and who is now 47 years old. He joined the staff of the labor-oriented Vermont Workers’ Center in 1999 and was serving as its executive director. Haslam and fellow organizers were years into a push for single-payer in Vermont.

Shumlin’s decision, Haslam said, “basically made me, and some others that helped start RAD, realize we needed additionally another vehicle that could actually help win the kind of bold policy change necessary.”

Haslam saw two groups as necessary: one focused on grassroots organizing that could mobilize around a multitude of rights, and another for recruiting and training the next generation of politicians — particularly people who weren’t typically encouraged to run for office.

RAD launched on Labor Day 2015 and is now made up of two sister organizations.

“Especially since Citizens United, you’ve seen the powerful elite interest in their corporations be able to severely impact what’s possible in our democracy,” Haslam said, referring to the 2010 U.S. Supreme Court decision often cited as having opened the floodgates to money in politics. “We needed to have an organized response around that.”

According to Mary Gerisch, Vermont co-chair of the Rights & Democracy Institute, “It’s gotta be both. It’s gotta be the public pushing the lawmakers but also educating each other.”

‘A lot of success’

The influence of Rights & Democracy can be felt in the Burlington area.

Perri Freeman, a former staffer for the organization, was elected to the Burlington City Council in 2019. They had earned the local Progressive Party’s endorsement after out-caucusing longtime City Councilor Jane Knodell, also a Progressive.

Before Rep. Tanya Vyhovsky, P/D-Essex Town, won a seat in the Vermont House in 2020, she was an organizer with Rights & Democracy — and took one of its candidate training courses.

He cited former state Rep. Kiah Morris, a Bennington Democrat, as the sort of candidate Rights & Democracy might seek to recruit. Haslam, then still with Vermont Workers’ Center, remembers being impressed by Morris when she won her first election in 2014. She became the only African American woman in the Legislature at the time and just the second in Vermont history.

In April 2020, Morris became the organization’s first movement politics director. The position’s responsibilities include recruiting and training potential political candidates — particularly those from backgrounds that are historically underrepresented in government — and engaging people in the political process.

The goal of the position, and resources like the newly launched Catalyst Leadership program, is to take people “from protest to power,” Morris said.

The programs work to empower individuals “so they can see themselves serving in these places where decision-making power is held,” Morris said. That could mean Congress but also school boards or zoning boards.

Haslam counts the state’s paid sick leave law, signed in 2016, among the early legislative victories of Rights & Democracy and fellow organizers. The organization also helped rally support for Vermont’s most recent minimum wage increase, which will reach $12.55 by 2022. Gov. Phil Scott vetoed the bill, but the Legislature voted to override his veto. The organization is also pushing to bump the minimum wage to $15 by 2024.

Leading up to the general election last November, Rights & Democracy committed resources to a nationwide campaign to protect voter rights.

Beyond hard legislative victories, the organization has grown in scope and influence. It now has Vermont chapters in Bennington, Burlington, Essex and Rutland — and Vermont and New Hampshire have their own co-chairs.

While the organization mostly stuck to training and endorsing first-time candidates for office, McGill said an increasing number of incumbents have begun to seek the Rights & Democracy stamp of approval.

Victories have come more slowly outside the Burlington area, McGill said, but she said the group is making progress.

There’s also more of a “public consciousness” about the organization, according to Gerisch. Most people in Bennington County, where she lives, have heard about Rights & Democracy in some capacity, she said, which she counts as a success.

“Once people know about RAD — and you’re never going to get everybody involved — but my hope is that we will continue to get more and more new people involved, and that’s been happening as the years have gone by,” Gerisch said.

‘Best is yet to come’

Haslam said he always knew the time would come for him to pass the baton to someone else, and he’s happy to leave the organization in a strong position.

On top of “changing the game of progressive politics,” Morris credits Haslam with “bringing in and centering the voices of those most marginalized, including women of color in major leadership positions.”

“He’s really built an incredibly influential organization that, again, has the eyes and ears of our elected leaders from the local level all the way up to the national level,” Morris said. “And that is no small feat to do in six years.”

Haslam isn’t going anywhere anytime soon. He wants his Rights & Democracy role to change “from executive director to cheerleader and supporter,” and he’s keeping an eye on the national progressive movement as a potential landing spot in the future.

For now, Haslam is staying put in Essex with his elementary-school-age children. He plans to stay with Rights & Democracy through the winter to aid in the transition and hopes to hire a new executive director by this fall.

“We have an incredible staff team. We have a lot of stuff heading in the right direction, and that’s exactly the time when it’s good to have a leadership change,” Haslam said. “I do think the best is yet to come for RAD.”

Reporter Seamus McAvoy has previously written for the Boston Globe, as well as the Huntington News, Northeastern University's student newspaper.