With Living In Data, Jer Thorp demonstrates the importance of enabling people to participate in the process of creating and telling the stories behind data. 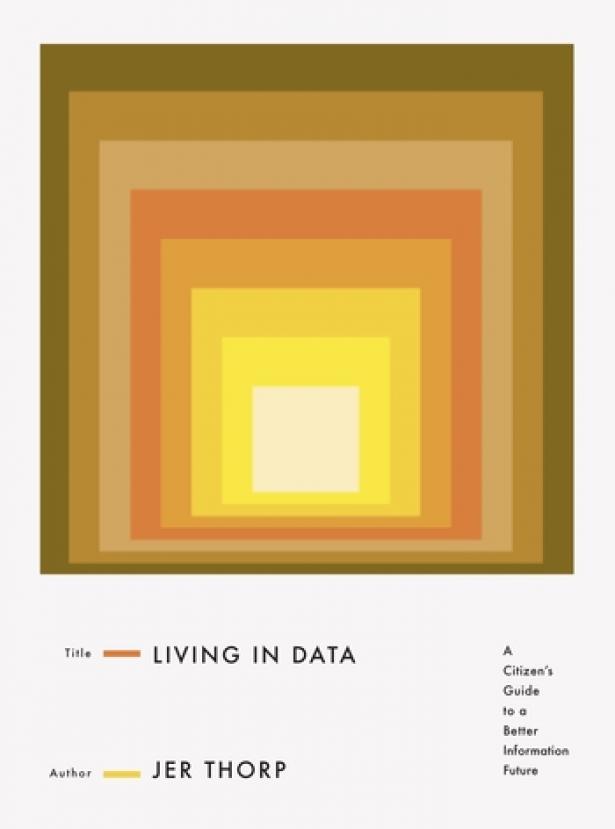 Data is not new.  For tens of thousands of years, humankind has created such records by gathering observations, measurements, and information about themselves and the world around them.  In recent centuries, data has most often been used to generate laws and explanations for physical phenomena.

As data science has emerged as its own discipline, those scientific methods are now often directed toward predictive modeling of human behavior.  The power of such predictions allows individuals, corporations, and governments to try to alter how people, especially as consumers, will behave.  Mark Zuckerberg’s much-mocked explanation of Facebook in a 2018 joint Senate hearing — “Senator, we run ads” — might be more honestly rephrased as, “Senator, we sell you.”  Today, data is often treated as just another resource to exploit.

But what would a better relationship between people and their data look like?

In Living In Data: A Citizen’s Guide to a Better Information Future, data artist Jer Thorp shows that we desperately need to rebalance the power relationship between people and their data, and alter how the latter is used.  More than just an activist’s call to protect data privacy, Thorp’s work — and his plethora of fascinating case studies — demonstrates how to put people and their well-being at the center of what data “ought” to do by finding, showing, and telling the different stories in data from different perspectives.  This approach enables a better relationship between people and their data because it allows them to participate in the process of creating and telling its stories.

Drawing on a decade of experience as a data artist — his projects have included “data expeditions” in Botswana’s Okavango Delta (“It’s 11:01am and I’m about to be attacked by a hippopotamus.”) and a stint as “Innovator-in-Residence” at the Library of Congress — Thorp’s work points to the dynamic, vibrant nature of data; it is not inert or passive, but rather a tool that responds to the social ecosystems that cultivate it. The examples presented in Living In Data support each chapter’s core themes, illustrating how gender and racial bias show up in data collection and how data visualization is a form of suspended storytelling.

“One of the projects I’m most excited about is the St. Louis Map Room,” Thorp shared via video call.  The month-long project unfolded from March 3-April 9, 2017, during which 29 different groups recorded 100 square feet of maps that depicted their neighborhoods and communities. Community participants mapped out their city by hand, emphasizing each mapper’s lived experiences in their city; how students walked to school, the location of community gardens,  churches, bus stops, food banks, parks. People recorded what they saw, what they knew, and how they navigated their city. Essentially, they drew what they lived.

The hand-drawn maps were then projected onto traditionally drawn maps of St. Louis.  Some of the mappers’ experiences were confirmed through the city’s more traditional data collections, while others directly challenged the city’s interpretations.  “The work produced by Map Room was an opportunity to foster dialogue and facilitate a process of data-telling,” Thorp explained.

A nonlinear and stunningly illustrated book, Living In Data never tries to wrap things up neatly for the reader.  The book is a complicated, iterative experience of how to truly grapple with the complexities and intricacies of data.  For some, this approach might prove difficult, even frustrating, to grasp because it is not proscriptive.

Living In Data is an essential text, one that requires readers to think — and to think specifically and carefully about the consequences of data decisions.  It asks readers to consider the stories data tells, how they are told, how they are drawn, and who does the telling.

“It’s a guide for individuals and communities who are looking to speak their own data stories louder than those that are being told about them by others,” Thorp passionately challenges readers in the first chapter of his book.  “Because we can do better than this.  We can create new data worlds that put humans first.”

Lydia Pyne is a writer and historian in Austin, TX, interested in the history of science and material culture. She is the author of Bookshelf (Bloomsbury 2016), Seven Skeletons: The Evolution of the World’s Most Famous Human Fossils (Viking, 2016), and Genuine Fakes: What Phony Things Tell Us About Real Stuff (Bloomsbury, 2019). (Website http://pynecone.org Twitter @LydiaPyne)