What made the strike successful were two factors: collective action under common goals and the willingness for immigrants, especially women, to be unapologetically vocal about their concerns. Its lessons about racism and justice are still relevant. 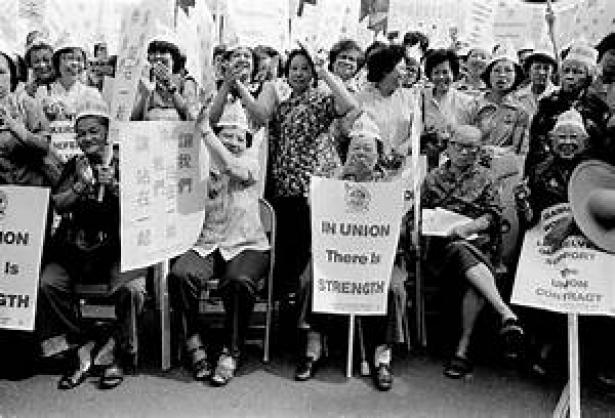 Nearly two decades later, the strike is still known as one of the largest protests in the history of Chinatown. The success of the strike, however, remains overlooked, or, at best, forgotten by the popular imagination, says May Chen, one of the core ILGWU organizers of the strike. There was little media coverage on Asian Americans at the time, rendering Asian American-led movements and activism “invisible up to the millennium.”

With the recent surge of attacks against Asians Americans—the byproduct of decades’ worth of systemic racism and more recently, the racialization of COVID-19 as the “China Virus,”—a new wave of Asian American activism has emerged. While President Joe Biden signed the COVID-19 Hate Crimes Act, more than 85 Asian American and LGBTQ+ groups criticized the legislation’s focus on law enforcement—which has a dubious record when it comes to the protecting Asian American communities to begin with—for failing to address any of the root causes of anti-Asian violence, including economic inequality. In in an op-ed for The Seattle Times, professor Linh Thủy Nguyễn wrote: “We can name physical attacks and deaths as racist violence, why can’t we name the system of racial capitalism that produces the economic precarity of living paycheck to paycheck an issue of violence, as well?”

Racial capitalism and economic precarity were at the heart of the 1982 ILGWU strike, which stands as a stark rebuke to the common misperception that Asian Americans are politically unengaged and largely unconcerned with issues like workers’ rights. It’s a story of how Asian American alliances and activism transformed the economic conditions of an industry that exploits marginalized immigrant women with lessons for activists to follow nearly 30 years later. And crucially, it’s an example that illuminates how racial violence manifests in more subtle ways beyond hate crimes and violence.

Economic independence through the garment industry

In 1963, Chinatown’s garment industry spanned 50 garment factories and employed a total of 2,000 workers. But after the Immigration and Naturalization Act eliminated the racial quota system that gave preference to western European immigrants and “skilled” workers in 1965, a new wave of Chinese immigration doubled the Chinese American population within a decade. Twenty years later, garment manufacturers sold between $150 and $200 million in annual merchandise—ranging from zippers and waistbands for sportswear to patterned dresses—with $100 million dollars on the payroll. Chinatown’s garment industry boomed to include 500 garment manufacturers employing up to 25,000 workers, 80% of whom were Chinese women. The garment industry was an avenue to economic independence for these non-English speaking immigrants and a means to supplement their husbands’ income.

However, wages were low, hours were long, injury was common, and crowded, unhygienic, poorly ventilated facilities led to the spread of viral and gastrointestinal disease among garment workers. Jay Mazur, former manager of the Local 23-25 chapter of the ILGWU, called the demands of the workplace “preposterous, unrealistic, and totally unacceptable,” inspiring a new contract that called for higher pay, additional paid time off (holiday, sick leave, jury duty, etc.) and more robust health care and retirement benefits. Industries negotiated a contract with the union but Chinese manufacturers rejected it, fearing that their businesses would go bankrupt. ILGWU organizers like Chen decided to take matters to the streets, which culminated in the 1982 garment strike.

“Many employers thought they could prey on the ethnic sympathies of the workers and just say ‘Look, we’re all Chinese. You don’t need the union, you can function without it,’” Chen said. “Thankfully, the workers and the union realized they would have a lot to lose if they gave it up.”

Workers secured a more robust union contract and the strike galvanized Chinatown community members to be more politically active—Chen co-founded the Asian Pacific American Labor Alliance, the first and only union for AAPI workers. The most significant impact of the strike, according to Chen, was how it transformed the cultural perception around Asian American women. Chinese women were once perceived as quiet, docile, and submissive; now they were seen speaking out against injustices in the workforce, actively participating in their union, and becoming leaders at local community organizations. Some women were even empowered to walk away from domestic violence.

“Chinatown, especially when I was working in the union in the 80s and 90s, was still really male dominated and chauvinistic,” Chen said. “But the women of this community became much more outspoken … that was pretty amazing to me.”

While the strike improved workplace conditions for Chinatown’s garment workers, the garment industry took a severe hit during the globalization wave in the early ‘90s. U.S.-based Chinese manufacturers moved their production overseas for cheaper labor, and new media companies gentrified remaining factories out of the neighborhood, shuttering up to 50 shops each year between 1998 and 2001. The 9/11 attacks were the final blow—the aftermath blocked off Chinatown and disrupted major commercial activity for weeks. Unable to financially recover, the last standing manufacturers closed shop, leaving 8,000 workers out of jobs over the next two years. Those with speciality skills (i.e., pattern making) found jobs at high-end American fashion stores; the rest transitioned out of the industry and turned to alternative jobs: elderly home care, food service (some women wrapped dumplings at Chinese restaurants), and other low-wage, service-oriented work.

Nearly two decades later, California is now the epicenter of U.S. garment industry, employing over 45,000 garment workers, many of whom are undocumented Asian and Latino immigrants. And while the location of the industry has shifted, its working conditions remain unchanged.

In 2016, the U.S. the Department of Labor detected violations such as wage theft and unsanitary conditions in 85% of the California factories they visited. Furthermore, workers are paid through the piece-rate system, making as little as $0.03 per garment, or up to $300 dollars for a 75-hour week. The economic precarity of the industry was compounded by the recent pandemic—global supply chains were disrupted and consumer demand for clothing lowered so significantly that commercial western brands cancelled $1.44 billion in orders. To make up for lost revenue, garment manufacturers switched to producing masks, hospital gowns, and other forms of personal protective equipment (PPE) at high volumes. But even though garment workers in the U.S. were classified as essential workers, they continued to toil in factories where bathroom breaks were limited and social distancing and face coverings inadequately enforced. One of Los Angeles’ largest coronavirus outbreaks took place in an LA Apparel garment factory last summer, where 375 workers tested positive for COVID-19, resulting in four deaths. While more than 234,000 Californian residents are getting vaccinated every day, undocumented workers remain hesitant, fearful of revealing their immigration status while getting vaccinated.

Although Chen acknowledges the disparity between what essential workers are called and how they’re actually treated, she appreciates how the labor of garment workers is finally being recognized.

“It’s very bittersweet,” Chen says. “I think it’s good that there’s finally a catchphrase that shows even the most minimal appreciation to workers who used to be completely invisible … And for Asians especially—we’ve been invisible for so long.”

While Chinatown’s garment industry is nearly nonexistent now, the lessons learned from the 1982 strike are still salient. Like the organizers who led the 1982 strike, garment workers in California are continuing to organize for fair wages and safe conditions in the workplace. At the end of last year, California state Sen. Maria Elena Durazo introduced the Garment Workers Protection Act (GWPA or SB-62) to replace the piece-rate system with a minimum hourly wage and hold brands accountable for workplace abuse. With support from the Garment Worker Center, the Western Center On Law & Poverty, and Bet Tzedek Justice For All, the GWPA passed the Senate Judiciary Committee in April, inching its way closer towards improving the lives of thousands of workers.

What made the 1982 strike so successful, Chen says, boils down to two key factors: collective action under common goals, and the willingness for immigrants, especially women, to be unapologetically vocal about their concerns.

“Garment workers recognized that Chinese workers, if they join together, can be an important force,” said Margaret Fung, the co-founder and executive director of the Asian American Legal Defense and Education Fund in the documentary We Are One. “They can exert some control over their lives, their working conditions, and their wages, but only if they work together and have a union.”

For Asian Americans in particular, Chen is hopeful that transformative social change, whether that’s an end to unjust labor practices or the numerous cultural mythologies that render Asian American communities susceptible to all forms of violence, is possible.

“Like the case of Vincent Chin, there have always been waves of anti-Asian violence,” Chen said. “But what’s good now is that more people are speaking up.”

Aaron Mok is a Chinese American freelance multimedia journalist who covers climate, agriculture, labor, and their intersections to social justice. His work has been featured in Civil Eats, Politico, GreenBiz, Food Tank, and more.

Prism is a BIPOC-led non-profit news outlet that centers the people, places, and issues currently underreported by national media. We’re committed to producing the kind of journalism that treats Black, Indigenous, and people of color, women, the LGBTQ+ community, and other invisibilized groups as the experts on our own lived experiences, our resilience, and our fights for justice.  Readers like you can play a key role in keeping our newsroom strong. Your tax-deductible contribution helps Prism ensure that journalism accurately reflects this current political moment and beyond.