The outgoing leader of NYC's leftmost union local looks back on long struggle to transform CUNY. 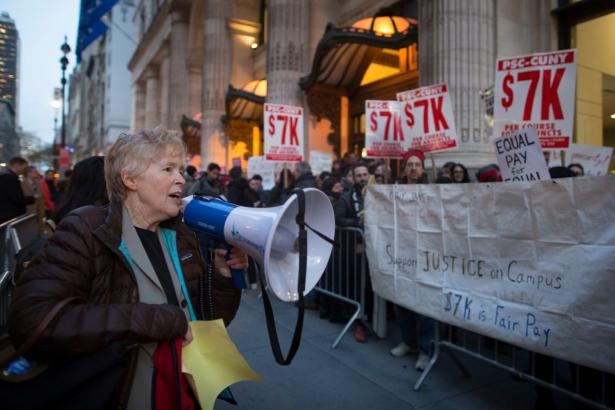 Barbara Bowen speaks at a 2017 rally for a new union contract,Photo: Dave Sanders.

It was the spring of 2000 and neoliberalism was flowering all across the land when a contingent of unabashedly left-wing professors at the City University of New York running as the New Caucus won control of their dormant faculty union.

With the left excluded from power almost everywhere and most of the labor movement in a decades-long slumber, the New Caucus’s victory at the largest urban university system in the country marked a rare breakthrough.

The newly elected leaders of the Professional Staff Congress had been protesting the defunding of CUNY for years. In March 1995, some of them donned their academic robes and joined 20,000 CUNY students in an unpermitted march near Rudy Giuliani’s City Hall that ended with mounted police charging into the crowd on horses. The New Caucus also had clamored to no avail, for their union to join the fightback. Now, they were in charge and had to deliver.

“It was an exciting time,” recalls Barbara Bowen, the Queens College Professor of English Literature who became the PSC’s new president in 2000 and stepped down last month after 21 years on the job.

The newly energized union held mass membership meetings, created an organizing department from scratch, built a modern filing system (which had previously been a single bag full of random papers), revamped the union newspaper, created new committees — including ones for cultural programming and international solidarity — and launched a contract campaign that grew to have 174 demands. Everyone’s voice would be heard!

“What I’m proudest of is that we were able to make the PSC a fighting union that does not give up,” said Bowen, who will take a year-long research sabbatical before returning to the classroom. “When something happens on campus or some edict comes out from management, the first thing a lot of members say is, ‘Where’s the union on this?’ I love that because when I first came to CUNY, no one would ever ask where the union was.”

During Bowen’s tenure, the PSC earned its reputation as arguably the most left-wing union local in the city. Its membership increased from 17,000 to 30,000 members. It embraced radical grassroots movements from Mexico to South Africa while achieving concrete gains for its members — rescuing its welfare fund from insolvency and becoming the public sector union in New York to win paid parental leave, targeted increases to address salary inequities of race and gender, paid research leave for untenured faculty and paid office hours for part-time faculty.

“We use the contract, I think really creatively, as an arena of struggle to reshape the university,” Bowen said.

“Barbara’s one of the most effective union leaders in the country,” said Nancy Romer, a retired Brooklyn College professor who served on the PSC Executive Council for nine years. “She and the New Caucus took a moribund union and made it a fighting union.”

Bowen grew up in England. Her parents didn’t receive a college education but still infused a love of learning in their children. She studied at Oberlin and Yale with an interlude of organizing migrant tobacco pickers. During her graduate studies, she also threw herself into supporting a union drive by Yale’s clerical workers. By the time she came to CUNY in 1985, it was probably inevitable that she would be drawn to union activism at the austerity-ridden university.

I felt a rush of emotions when I learned of her retirement. From 2009 to 2014, I served as associate editor of the PSC’s monthly newspaper and had a front row seat as the union continued to push forward against the headwinds of a neoliberal era.

Bowen lived and breathed the union and was a talented public speaker. Her knowledge of CUNY’s 25 campuses, their academic departments and individual union members is encyclopedic. She has been a tenacious negotiator with the city, the state and CUNY management, but is also someone who once led the union’s delegate assembly in joyously singing “If I Had a Hammer” to honor the passing of folk music legend Pete Seeger.

My time at the PSC was a master class in the intersection of idealism and realpolitik led by Bowen, First Vice President Steve London and other New Caucus members.

Even the smallest victory was hard fought. And there were always looming budget cuts to reverse. Big victories, such as getting 2,000 veteran adjuncts on the city’s health care plan, sometimes took more than a decade. Relationships with other unions had to be tended to. Mainstream politicians had to be educated and cultivated. The needs of competing power centers within the union had to be balanced. CUNY’s corporate-minded leaders were adversaries one day and potential allies the next, depending on circumstances.

For an ascendant left that has gained in clout and confidence in recent years with previously unimaginable electoral victories at the federal, state and local level, there’s much to be learned from the New Caucus’s experience of wielding power.

Not that everything has gone as hoped for the PSC. The austerity budgets of New York City and State have not ended. To the frustration of some PSC activists, the union’s leadership has never directly challenged the Taylor Law, the New York State statute that bars public sector unions from striking and levies devastating penalties against them if they do. Most vexing of all, the union has been unable to end the two-tier labor system at CUNY that has taken hold in academia over the past 40 years and left poorly paid part-time faculty teaching the majority of classes.

“What’s most vivid in my mind,” Bowen said, “are the things not done rather than the things done because they weigh heavily.”

Even hard-fought victories sometimes must be struggled for anew. Last year, 2,000 part-time faculty lost their jobs at CUNY amid the pandemic. Some of the rehired adjuncts have not received enough teaching hours to qualify for the city worker health care plan. During last year’s pandemic, CUNY Chancellor Félix Mattos unilaterally revoked a 2% raise that had been agreed to in the union’s current collective bargaining agreement. Additional pay raises for historically underpaid job titles were eliminated. 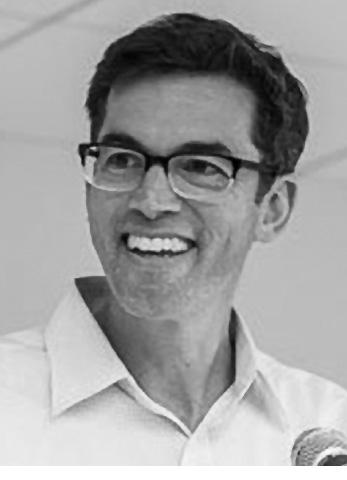 Bowen says the union will not rest until it wins back those concessions. That battle and others will be carried forward by a younger generation led by incoming President James Davis. Davis told The Indypendent the pandemic has forced the union to decentralize its operations.

“Necessity is the mother of invention,” Davis said. “We’ve developed strengths that will serve us well in the future.”

For Bowen, her final, pandemic year in office was her most demanding. After 21 years of total commitment to her work, letting go isn’t easy. But, she says she is ready for the change.

“You haven’t done your job as a leader if you haven’t prepared the people to take over for you,” she said.

Please support independent media today! Now celebrating its 20th anniversary, The Indypendent is still standing but it’s not easy. Make a recurring or one-time donation today or subscribe to our monthly print edition and get every copy sent straight to your home.