labor To Pass the PRO Act, We Need to Examine Past Labor Law Reform Failures

The battle for labor law reform has historically been one of the most difficult in US politics. Passing the PRO Act is crucial — but workers may not be able to win it without flexing their strike muscles. 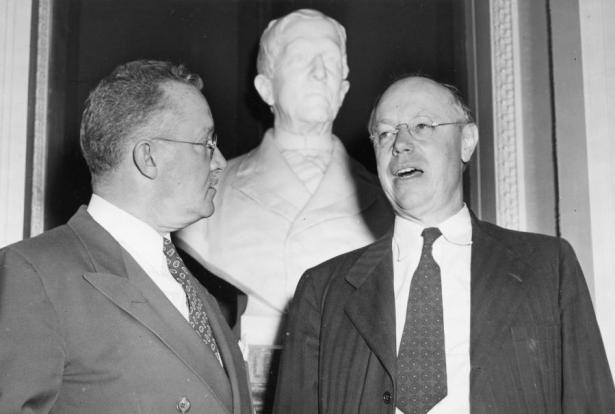 On March 9, the US House of Representatives passed HR 842, the Protecting the Right to Organize (PRO) Act. It has since been referred to the Senate, where it faces an uphill battle.

If approved, the PRO Act would be the most pro-union law since the National Labor Relations Act of 1935 (NLRA), commonly known as the Wagner Act. It would fix a lot of what is currently broken about labor law.

It would limit employers’ ability to intervene in union election campaigns, impose steeper penalties for employers who break the law, make it harder for employers to drag out negotiations and refuse to bargain with certified unions, legalize currently outlawed forms of union solidarity such as secondary boycotts, make it more difficult for employers to misclassify workers as “independent contractors,” and forbid so-called “right to work” laws. Instead of giving employers another tool to thwart workers’ rights, the PRO Act would align US statutes more closely with the spirit of the preamble to the Wagner Act, which states that the federal government should promote collective bargaining.

It is important, then, to keep up the pressure to pass the PRO Act. With a razor-thin Democratic majority in the Senate, the path forward involves convincing the remaining Democratic holdouts (Mark Warner of Virginia and Mark Kelly and Kyrsten Sinema of Arizona) to sign on to the bill as cosponsors, abolishing the Senate filibuster, and passing the legislation with a simple majority.

That won’t be easy. Examining previous failed reform attempts, some when unions were much stronger, reveals that labor law reform has been one of the most difficult policy lifts thanks to the feebleness of the Democratic Party and the power of corporate interests.

Since the Wagner Act set the basic framework for modern-day labor law in 1935, the letter of the law has only been revised twice.

The first legislative amendment was the 1947 Taft-Hartley Act. Passed over President Harry Truman’s veto as part of an anti-labor backlash that saw Republicans retake Congress for the first time since 1931, it enacted many of the provisions that continue to hamstring labor today, including allowing “right to work” laws and banning secondary boycotts.

It also denied labor law protections to unions whose leaders refused to sign affidavits swearing they were not members of or affiliated with the Communist Party or “any organization that believes in or teaches the overthrow of the United States Government by force or by any illegal or unconstitutional methods.” Employers and conservative elements within labor used the affidavits to dismantle more militant (and effective) left-led unions in the postwar decades.

The second was the Landrum-Griffin Act of 1959. Far less sweeping than either the Wagner or Taft-Hartley Acts, it was a mixed bag. On the negative side, it tightened restrictions on secondary boycotts and recognition strikes (where unions strike for employer recognition rather than going through the election process defined in the NLRA) and outlawed “hot cargo” agreements (requiring employers to boycott goods or services provided by another employer involved in a union dispute). On the plus side, the law repealed the anti-Communist affidavit requirement (which proponents knew had served its purpose) and enacted a “union members’ Bill of Rights” that created financial transparency mandates for unions and protected individual union members from retaliation for internal union activity.

As important as these legislative amendments were, the real evisceration of labor law has come in its interpretation. From the moment the Supreme Court declared the NLRA constitutional in 1937, courts and the National Labor Relations Board (NLRB) have “judicially deradicalized” labor law, undermining the Wagner Act’s stated purpose.

Court and NLRB decisions have outlawed sit-down strikes, allowed employers to use permanent replacement workers (aka scabs) if workers went on strike, restricted striking during the term of a collective agreement, left unions vulnerable to lawsuits and injunctions for striking, strengthened employers’ ability to meddle in union election campaigns, denied workers’ collective bargaining rights by allowing employers to dodge responsibility through “independent contractor” and franchising agreements, and much more.

These problems have been well-known for decades, but every attempt to fix them — even when union density was much higher — has come up short. The first legislative effort was a narrow proposal in 1965 to repeal Taft-Hartley’s “right to work” provision. About a third of US workers at the time were union members. The effort failed.

Legislators attempted a more expansive but still limited initiative called the Labor Law Reform Bill in 1977–78 under President Jimmy Carter. It would have sped up the union recognition process and imposed stricter penalties on employers who interfered with, or retaliated against, workers attempting to unionize. It, too, failed. 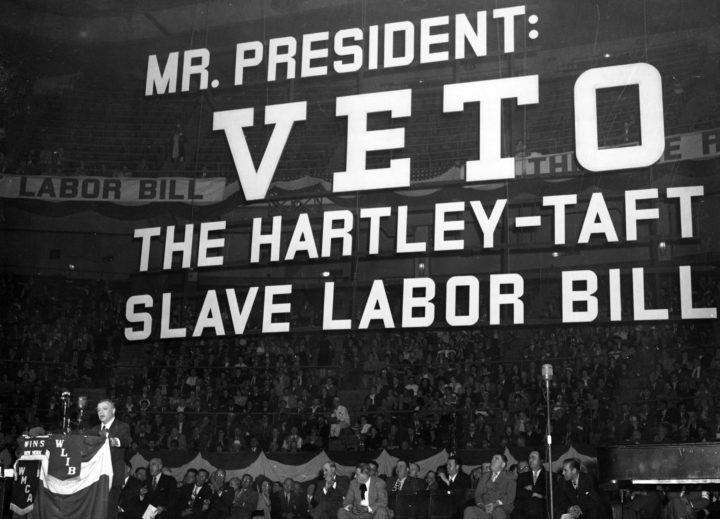 Labor leader David Dubinsky gives a speech against the Taft-Hartley bill on May 4, 1947. (Kheel Center / Flickr)

After twelve years of Reagan and Bush, labor law reform was back on the agenda when Bill Clinton took office in 1993. A tepid labor ally at best, the most Clinton tried (and failed) to do was pass legislation in 1994 prohibiting employers from using scabs during strikes. Labor law reform was then pushed aside for nearly fifteen years.

The next attempt got underway when Barack Obama took office in 2009. He famously spouted pro-union rhetoric on the campaign trail, vowing in 2007 to “put on a comfortable pair of shoes” to “walk on that picket line with you” if “American workers are being denied their right to organize and collectively bargain.”

Seemingly in line with his campaign rhetoric, Obama’s labor law reform gambit, the Employee Free Choice Act (EFCA) was the most comprehensive pro-labor legislation since the Wagner Act. Along with other reforms similar to those in the PRO Act, it would have provided for “card check” union recognition — requiring employers to recognize and bargain with a union after a majority signed authorization cards. This provision — widely used in Canada and other countries — would have allowed unions to bypass the hopelessly broken union election system, which allows employers to engage in scorched-earth campaigns of threats and intimidation to block workers from unionizing.

But despite having a Democratic president in office and large Democratic majorities in Congress, EFCA too went down to defeat. In this case, its fate was sealed after a special election to replace the late Senator Ted Kennedy reduced the Democratic Senate majority to fifty-nine seats, denying them the ability to override a Republican filibuster.

It’s Not Just the Filibuster

For every attempt at labor law reform, the proximate cause of defeat was the Senate filibuster. In this, it’s just one more glaring example of the profoundly undemocratic nature of the filibuster specifically and the Senate more generally.

But when it comes to labor law reform, the problem goes deeper than the vagaries of the upper chamber. Democrats, labor’s ostensible allies, have consistently failed to prioritize labor law.

For all the vaunted checks and balances in the US political system, both parties have shown that they can move their political agenda when they really want to. Republicans can ram through judicial appointments and tax cuts, and Democrats can use hardball tactics to pass legislation like Obamacare. That sense of urgency has almost never applied to labor law reform — perhaps because it threatens business interests more than nearly any other type of legislation.

The one time Congress did feel a sense of urgency to pass labor law reform was in the 1930s, when it approved the Wagner Act. But it’s important to understand why legislators felt that way.

Simply put, worker insurgency was intense enough to make both employers and politicians fear the alternative. As Massachusetts Representative William P. Connery Jr warned during debates about an early version of the NLRA in 1934, “you have seen strikes in Toledo, you have seen Minneapolis, you have seen San Francisco, and you have seen some of the southern textile strikes . . . but . . . you have not yet seen the gates of hell opened, and that is what is going to happen from now on unless the Congress of the United States passes labor legislation to cure the evils which are existing in industry and which are driving these workers to desperation.”

While strikes have been on the rise in recent years, it’s safe to say that employers and politicians are not afraid the gates of hell will open anytime soon.

More Work to Do

Let’s say the best-case scenario occurs: the PRO Act passes the Senate, and President Biden signs it into law. Unfortunately, unions would still be in dire straits.

We need only look north of the border to Canada to understand why. It’s useful because the PRO Act essentially aims to import Canadian labor law to the United States — and for good reason. Plenty of studies show that Canadian labor law does a better job of protecting workers’ rights and makes it easier to join unions. Canada’s unionization rate is about 30 percent, three times higher than in the United States.

This does not mean that fighting for labor law reform is futile. It is useful for highlighting the injustices facing workers today and for mobilizing broader publics who have not had a way to plug into workers’ struggles before. DSA’s PRO Act campaign is an excellent case in point. Grassroots pressure from DSA and some unions has already convinced hesitant senators like West Virginia’s Joe Manchin and Maine’s Angus King to flip their votes.

But no labor law reform can substitute for the hard work of rebuilding unions’ fighting capacity (a central challenge facing Canadian unions, too) and resuscitating the strike tactic (the true source of labor’s power). Even with the PRO Act in place, organizing unions would remain a tough, risky endeavor. Workers would be unlikely to take the leap unless they believed unionizing would transform their lives. And nothing demonstrates that better than unions fighting and winning.

The best example in recent years is teacher organizing. Chicago teachers showed the power unions can project with their 2012 victory — galvanizing teachers elsewhere, most notably those behind the “Red State Revolt” of 2018 and the Los Angeles teachers’ strike of 2019. Not only did these strikes revitalize the unions involved, but they sparked more organizing, particularly among charter school teachers.

However, as inspiring as the teacher organizing has been, it has yet to yield the spillover effects that could signal a broader labor revitalization. Organizing proceeds apace in the United States, and there are some bright spots such as health care. But so far we have seen nothing that would approach a “wave” or an “upsurge,” certainly not on the scale that preceded the passage of the Wagner Act.

Passing the PRO Act would be an important step forward, but it is nowhere near enough. If US labor is currently facedown on the pavement with employers using labor law to press their boot down on labor’s neck, the PRO Act would get employers to let off a bit. To get back on its feet, labor will have to fight.

Barry Eidlin is an assistant professor of sociology at McGill University and the author of Labor and the Class Idea in the United States and Canada.

Our new issue, “The Ruling Class,” is out now. Get a $20 discounted print subscription today!