A history of colonialism and occupation has had dire consequences for Palestine’s women, from lack of education and access to resources about family planning to extreme physical conditions in which they must live and give birth. 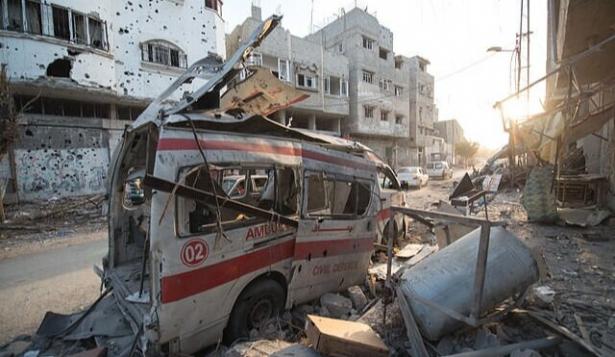 Photo taken during the 72hr ceasefire between Hamas and Israel on 6th of August 2014. Destroyed ambulance in Shuja'iyya in the Gaza Strip., Boris Neihaus (Wikimedia Commons | CC BY-SA 4.0)

“No one looks at an olive tree and asks why it hides its fruits. It blossoms when it's ready and under the right conditions.” — Sadiqua Hamdan, Palestinian Women: Rising Above Limitations, Expectations & Conditions

The British consolidated their control over Palestine during the San Remo Conference in 1920, where the League of Nations authorized the British Mandate rule that would remain in place until 1948. This occupation by British forces would have long term effects on Palestinian women, who found their home embroiled in constant, bitter warfare and their health and futures profoundly impacted by a lack of education, medical care, physical safety, and socioeconomic control.

The Balfour Declaration further showcased broken promises. Written in 1917, the Balfour Declaration was crafted by British Foreign Secretary Arthur James Balfour to Baron Rothschild, a significant figure in the global Jewish community. This letter promised the Jewish people a homeland in Palestine, neglecting the identity and existence of Palestinians in the land. British national policies played a significant role in shaping the modern regional, class, and gender divide in Palestine.

The traditional British model of education enforced in Palestine benefited elite men, and even public schools were segregated upon gender, linguistic, and national boundaries. Little was offered in the way of women and girls’ access to education. The British justified their abandonment of women’s education by citing a lack of interest, religion, and culture. An official document from British officials in 1946 declared "there has not yet been a universal demand for the education of girls in Muslim villages, although the demand is increasing." In rural regions, women who wanted to become teachers had no formal training until 1935, and even then, only one educational center opened that year. The educational curriculum the British promoted in villages further “othered” girls—teaching them sewing and embroidery whereas boys were taught manual labor and agriculture.

Education and fertility rates have an inverse correlation. Through education, women gain access to a wide range of communities and networks, which exposes them to wider options for family planning and career pursuits. Intercommunal support systems, particularly with women from different backgrounds, pass along knowledge to generations of women regarding different belief systems, different family types, and desired family size. Modern statistics emphasize the importance of education in family planning. According to the UN, data from both 1990 and 2019 conclude that there is a global pattern: Countries with high use of contraceptives have lower fertility rates. Contraceptives help reduce maternal mortality and unintended pregnancies as well as promote pregnancy spacing and the prevention of high-risk pregnancies. Education grants women access to resources about contraceptives and reproductive health, and under British occupation and its educational system, Palestinian women did not gain access to these resources for contraceptives and family planning.

When the British Mandate ended in 1948, the UN sanctioned the Israeli occupation of Palestine. The forced exile of Palestinians from their homes during the Nakba (“the Catastrophe”) that same year caused an increase in infant mortality. During the Nakba, between 400 and 600 Palestinian villages were destroyed. Israeli soldiers forced Palestinians to flee their homes by means of psychological and physical warfare. Many mothers lost their children due to the abysmal conditions in which they were forced to give birth.

For decades, Palestinian women have testified to the horrors the Nakba rained upon them. Nina Gren, a social anthropologist at Lund University, highlights the stories of women who survived the ethnic cleansing in her article Gendering Al-Nakba: Elderly Palestinian Refugees’ Stories and Silences about Dying Children. In the article, a woman named Umm Hassan recalls that she was forced to hide and give birth in a cave when Israeli soldiers raided her village, and her child died seven days later. Her other daughter, only one year old, also died from illness brought on by unsafe physical conditions.

The long shadow of colonialism and occupation persists for Palestinian women. A 24-year-old pregnant woman named Maram Abu Ismail was shot by Israeli soldiers near Ramallah in the occupied West Bank. Maram’s story is one of many that encapsulates hardships faced in the country. Far too frequently, Palestinian women are denied their plea to travel to a hospital and may endure hours at checkpoints in the West Bank and East Jerusalem in their pursuit of medical facilities where their humanity is stripped from them. Too many are forced to give birth at checkpoints and are denied access to quality maternal healthcare.

According to the Palestinian Ministry of Health, 10 percent of Palestinian women were forced to undergo labor or give birth at a checkpoint between 2000 and 2006, causing the death of at least 35 babies and five women. Many women have begun to choose home births for fear of enduring these obstacles. During a period of intense conflict, home births increased by 7.9 percent. In 2018, a study by the United Nations Relief and Rehabilitation Administration found that the infant mortality rate in Gaza remains high: 22.7 per 1000 live births.

Among those children who do live through labor, many are not immunized and die from preventable diseases. According to the World Health Organization, a total of 124 cases of measles were confirmed, including two deaths, in Gaza in 2019. Fifty-seven of these individuals were unvaccinated, and 28 were between six months to one year old. Infant immunization remains a crucial issue in occupied Palestine.

“A history of colonialism and occupation has had dire consequences for Palestine’s women, from lack of education and access to resources about family planning to extreme physical conditions in which they must live and give birth.”

Since 2007, Israel has imposed a land, air, and sea blockade on Gaza, and the maternal healthcare system has suffered as a result. Gaza’s healthcare system consists of 13 public hospitals and 14 clinics, but the blockade has forced shortages of medicine and medical supplies, which has caused these medical facilities to falter. Pregnant women bear the stress of an under-resourced maternal healthcare system. Palestinians do not have command over land, water, or other natural resources, and the GDP of the country has weathered the consequences. Israel continues to expand settlements, control Palestinian exports, and exert dominance over all water-related infrastructure. Palestinians are unable to construct water installations without a permit from the Israeli government. In turn, poor infrastructure and poor economic conditions fester.

Socioeconomic factors further exacerbate maternal mortality in occupied Palestine. Palestine holds the status of a lower-middle-income-economy while Israel is deemed a Global North country by the World Bank. Many Palestinian women have died in a dire state because they cannot afford quality healthcare. According to the report by BMC Pregnancy and Childbirth, poorly insulated housing contributes to poor health among Palestinian women, and even death during the coldest months. Two of the women discussed in the report died from bronchial asthma and were forced to weather cold temperatures in their homes, where they died as a result.

A history of colonialism and occupation has had dire consequences for Palestine’s women, from lack of education and access to resources about family planning to extreme physical conditions in which they must live and give birth. This legacy of colonialism tells a layered story, one that displays the long-term impacts of occupation on the women today and on future generations inheriting such a troubled history. Women in Palestine continue to battle a history of heinous treatment that puts their health, and the health of their future children, at risk.

*Author’s note: This article uses the binary terms of men/women and male/female when describing gender identity. This is not a reflection of how gender was experienced or lived by Palestinian people in this period, nor does it reflect the fluidity of gender as we understand it today. However, most contemporary Palestinian and Western sources used in my research refer to gender in the binary as male/female, men/women.

Aisha Malik graduated with a Bachelor's Degree in Political Science. She is currently Shopping Editor at The Tempest and likes petting cats and dogs in her spare time (and watching anything with Zendaya).

Lady Science is a magazine for the history and popular culture of science. We publish a variety of voices and work on women and gender across the sciences.

SUPPORT LADY SCIENCE
We are independent, not-for-profit media and rely solely on the support from our readers and listeners to pay our writers, editors, and a number of recurring operational expenses each month. All donations go directly to Lady Science.