How Bad is the Rise in US Homicides? Factchecking the ‘Crime Wave’ Narrative Police are Pushing

Homicides were up across the US in 2020 and appeared to be primarily driven by rising gun violence, but other crimes fell

June 30, 2021 Lois Beckett and Abené Clayton The Guardian
Printer friendly
How Bad is the Rise in US Homicides? Factchecking the ‘Crime Wave’ Narrative Police are Pushing Published June 30, 2021 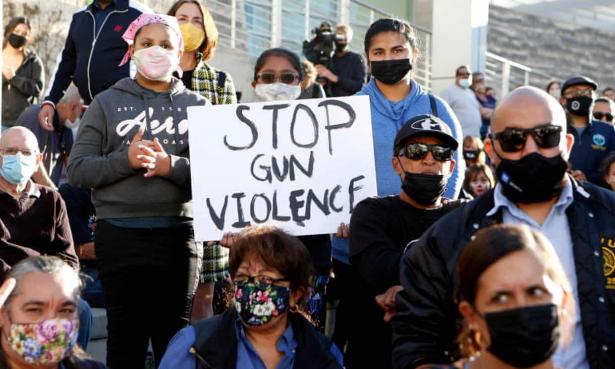 A vigil for the victims of a shooting in San Jose, California, on 27 May 2021., Photograph: Amy Osborne/AFP/Getty Images

There’s been a wave of media coverage this summer about an increase in homicides across the United States, with attention often focused on the same political question: will Americans still want to defund or even reform the police if “violent crime” is on the rise?

Anxiety about violent crime is often used to win elections. Police and politicians routinely share misleading, out-of-context crime statistics to advance their agendas. Fearmongering about rising crime has also been used for decades to undermine Black Americans’ protests for civil rights. So it’s important to ask: is this homicide increase actually significant? And how much evidence is there for any of the explanations about why killings are going up?

After decades of a primarily downward trend in the overall number of people killed, crime experts say they expect 2020 will mark the biggest single-year national jump in homicides since national crime statistics began to be released in the 1960s.

A preliminary government estimate shows a 25% single-year increase in killings in 2020. In some larger cities, the number of homicides has remained higher than usual through the early months of 2021.

While official national crime data will not be released for months, some trends are clear. The 2020 homicide increase happened across cities and towns of all sizes, from those with fewer than 10,000 residents to those with more than a million, according to preliminary FBI data.

The rise in homicides likely translated into an additional 4,000 to 5,000 people killed across the country compared with the year before, according to early estimates.

It was an especially hard year for cities that have never seen decreases in gun violence to match the overall national trend. Philadelphia and St Louis returned close to their historic highs for the number of people killed in a single year, according to the Philadelphia Inquirer and the St Louis Post-Dispatch. Chicago, which had seen homicides fall below 500 in the early 2010s, saw them jump to 770 in 2020, though not to its historic 1974 high of 970 homicides, according to the Chicago Tribune.

It does not take a huge numerical increase in killings to translate into big percentage increases in a city’s homicide rate. Chicago, a city of 2.7 million people, saw 300 more people killed in 2020 than in 2019, and more than 1,000 additional nonfatal shootings, according to data from AmericanViolence.org.

New York, a city of 8 million people, saw an increase of about 150 homicides and 700 nonfatal shootings.

Smaller cities saw smaller total increases: Oakland and Minneapolis, which both have populations of about 400,000 people, each saw homicides increase by about 30 additional people killed last year, and between 100 and 270 additional nonfatal shootings.

And yet, even after an estimated 25% single-year increase in homicides, Americans overall are much less likely to be killed today than they were in the 1990s, and the homicide rate across big cities is still close to half what it was a quarter century ago.

New York City saw more than 2,200 killings in a single year in 1990, compared with 468 last year, according to city data. In the bigger picture, that’s a nearly 80% decrease.

What we know and don’t know

The homicide increase appears to be primarily driven by rising gun violence, with the nonprofit Gun Violence Archive reporting nearly 4,000 additional gun killings nationwide in 2020 compared with the year before.

But what’s happening with homicides is not part of some broader “crime wave.” In fact, many crimes, from larcenies to robberies to rape, dropped during the pandemic, and continued to fall during the first few months of 2021. “Crime” is not surging. Even the broader category of “violent crime” only increased about 3% last year, according to the preliminary FBI data from a large subset of cities. It’s homicide in particular that has increased, even as other crimes fell.

Early data also suggests the homicide increase isn’t happening at random, but that much of the additional violence is clustered in disadvantaged neighborhoods of color that were already struggling with higher rates of gun violence before the pandemic, according to Richard Rosenfeld, a criminologist who has authored multiple national reports on crime and violence trends.

“Everything we know suggests that the increases in homicide are occurring in the very neighborhoods where homicide has been traditionally concentrated,” he said. “What we’re not seeing is a spreading-out of homicide.”

National demographic data for the people killed in 2020 is not yet available. But it’s likely that a substantial proportion of the homicide victims were Black Americans, at the same time that Black Americans were suffering disproportionate rates of Covid-19 infection and death, as well as witnessing the aftermath of a global uprising against police killings of unarmed Black people.

Lois Beckett is a senior reporter covering gun policy, criminal justice and the far right in the United States. Twitter @loisbeckett. Click here for Lois Beckett's public key.  Abené Clayton is a reporter on the Guardian's Guns and Lies in America project.

Reasons for the increase

No single narrative can ever explain the dynamics of violence in a single city, much less across an entire country. Fatal violence is relatively rare and often intensely personal: according to FBI data, many American homicide victims know their killers. National crime data is usually just the sum of a range of contradictory, extremely local crime trends.

But there is some evidence that national factors, including the many stresses and disruptions of the pandemic, may have played a role in the 2020 homicide increase. The uptick was “widespread,” Rosenfeld said. In an analysis of big city crime trends for the nonprofit Council on Criminal Justice, “We found very few cities that did not experience pretty significant rises in homicide during 2020,” he said.

Homicide rates were higher during every month of 2020 – even before pandemic-related shutdowns started in March, the analysis found. But there was also a “structural break” in the data in June, indicating “a large, statistically significant increase” in the homicide rate, around the same time as the mass protests that followed the murder of George Floyd.

So far, there’s a lot of political rhetoric, and relatively little data or hard evidence, about how substantially different factors may have contributed to the 2020 increase.

Alongside a global pandemic, and a major protest movement against police violence and systemic racism, the US saw a historic rise in gun sales during 2020.

A preprint study from researchers at the University of California, Davis, which has not yet been peer-reviewed, suggested that a spike in gun purchases during the early months of the pandemic was associated with a nearly 8% increase in gun violence from March through May, or 776 additional fatal and nonfatal shooting injuries nationwide. The researchers found that states that had lower levels of violent crime pre-Covid saw a stronger connection between additional gun purchases and more gun violence. 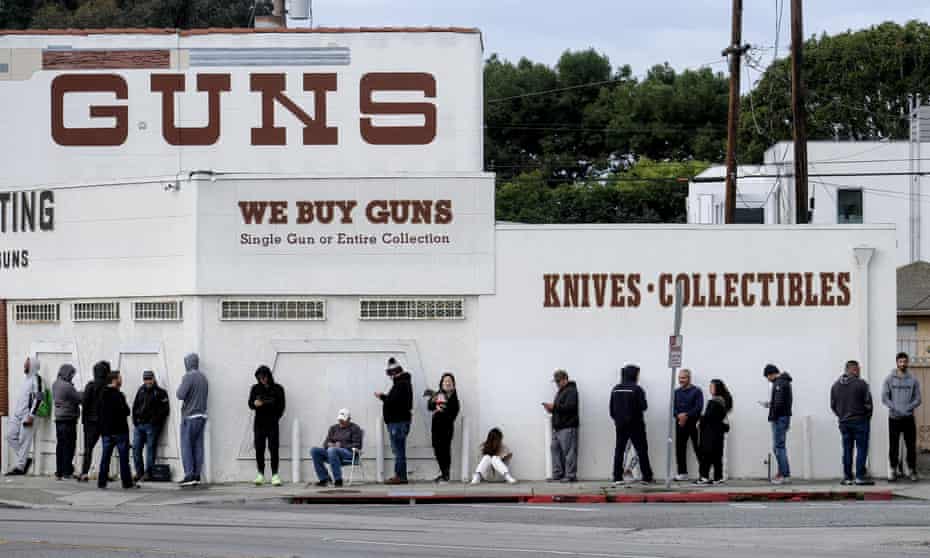 Community groups say that the pandemic forced them to shutter prevention programs, and created huge challenges for the work of violence interrupters, who rely on close relationships and in-person interventions with people at risk of shooting or being shot.

Many of the political claims about the homicide increase focus on pro- and anti-police sentiment, and about the future of the controversial effort to shift public dollars away from police departments and towards community violence prevention programs.

Some police officials and their allies have asserted that last summer’s big, volatile protests against police violence diverted police resources and attention away from their normal patrols, and have suggested that demoralized, angry police officers might be less proactive or effective in dealing with violent crime.

But Jeff Asher, a crime analyst who writes extensively about homicide trends, examined 60 cities and found no correlation between the number of Black Lives Matter protests, and the size of a city’s homicide increase.

Rosenfeld cautioned that any policing-focused explanation for the homicide increase needed to explain why the change would have only affected serious and deadly violence.

“Most crime is down, including most felony, serious crime,” he said. “If the de-policing argument is correct, why did it only affect an uptick in violence and not other street crime?”

Attempting to link changes in how police operated to the political protests after George Floyd’s murder also made less sense than looking at the sweeping disruptions in operations due to Covid-19, he argued.

“If there has been substantial de-policing, suspect number one is the pandemic,” he said.

While elevated homicide rates had continued into early 2021 in some cities, Rosenfeld added, the increase already appeared to be slowing.

“I do not expect homicide rates to reach the levels this coming summer that they were at last summer,” he said.

‘People do not want to understand’

For Americans who have spent years working to reduce gun violence at the community level, the media response to the rise in killings is deeply frustrating.

“There may have been an increase in 2020, but that’s not what the media portrayed: they portrayed it as ‘Shit’s off the hook,’” said DeVone Boggan, the founder of Advance Peace, a community violence intervention strategy first developed in Richmond, California.

The Bay Area city saw gun homicide rates drop by nearly 70% over the past decade. In 2020 the city saw a modest increase in homicides with 22 people killed that year compared to 17 the year before.

“Those increases that the city had are unfortunate, but they’re not as high as they were before strategies like ours.”

“People do not want to understand the level of distress, grief, trauma and destabilization, both economically and socially, that Black communities have had to endure in this once-in-a generation global pandemic,” said Pastor Michael McBride, the executive director of Live Free USA, a national advocacy organization. McBride has worked for nearly a decade at the intersection of criminal justice reform and gun violence prevention.

“The way we cover death in America is always different when the victims are Black, and right now, we ought to be talking about the victimization of Black victims and community and not the ‘crime rate.’”

Lois Beckett is a senior reporter covering gun policy, criminal justice and the far right in the United States. Twitter @loisbeckett. Click here for Lois Beckett's public key.  Abené Clayton is a reporter on the Guardian's Guns and Lies in America project