Nearly six months to the day after self-proclaimed patriots inspired by then-President Donald Trump led a siege on Congress, what should patriotism look like? 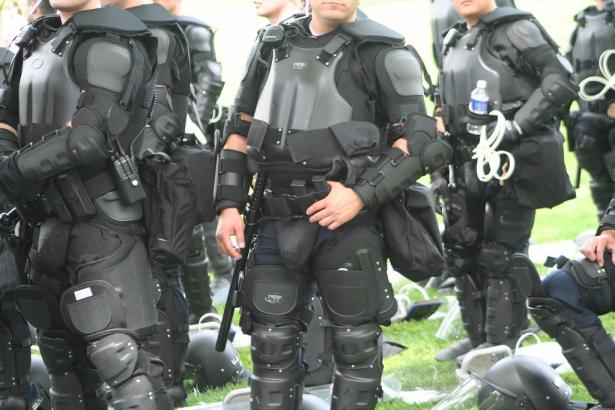 "69.NSM.PoliceAssemblance.USCapitol.WDC.19apr08" by Elvert Barnes is licensed under CC BY-SA 2.0

As America prepares to celebrate the nation’s founding on Independence Day, nearly six months to the day after self-proclaimed patriots inspired by then-President Donald Trump led a siege on Congress, it is worth considering a very different and far more inclusive vision: In the year 2021, what should patriotism look like?

In search of answers, Capital & Main interviewed Dorian Warren, the president of Community Change, a Washington, D.C.-based social justice organization. Warren spends his time thinking about the past, present and future of our country — something that has taken on new resonance for him with the birth of his baby daughter. As he discusses a modern and more progressive vision of patriotism, he does so through the lens of a parent contemplating the version of this country that he wants his daughter to grow up in. Warren spoke about the meaning of patriotism for the American left, especially in the aftermath of Donald Trump’s presidency that stoked divisions and racial tensions. Warren, who is a Capital & Main advisory board member, highlighted an 1852 speech delivered by Frederick Douglass entitled “What, to the Slave, is the Fourth of July.”

Douglas told his audience, at an Independence Day celebration in Rochester, New York — 11 years before legal slavery finally came to an end in the United States with the Emancipation Proclamation — that while they “may rejoice” on the occasion, he “must mourn.”

Warren, like Douglas, points out that we cannot overlook the scandalous inequality that still disgraces our nation, and at the same time fight to redeem the more noble principles outlined in the Declaration of Independence.

Capital & Main spoke to Warren from his home in Washington, D.C. The following interview was edited for length and clarity.

Dorian Warren: I’m not sure if there’s much we could classify as patriotism that Trump did. He pursued a very exclusionary white nationalism which, taken to its fullest conclusion, led us to the January insurrection. If you add the policy of mass death that led to 600,000 Americans dying from COVID-19, I have a hard time squaring how anything he did was patriotism. It feels like treason and insurrection with a little plunder thrown in.

You previously spoke to Capital & Main the day after the Jan. 6 crowd, waving Confederate flags, breached the Capitol. These people, of course, defined themselves as patriots too. How do you explain what seems to be a rather perverse use of that word?

In some ways they’re patriots to the lost cause. And the tell was flying the Confederate battle flag in the Capitol. They’re patriots of a treasonous government from the 1860s. It makes me think of the patriots who built that Capitol building stone by stone, brick by brick. [There were] many enslaved black adults, but especially black children who built the Capitol — who built that symbol of our democracy — with their hands and their labor.

“Trump pursued a very exclusionary white nationalism which, taken to its fullest conclusion, led us to the January insurrection.”

Over this past year we’ve had to look at some hard truths about the American present and past, the legacy of Jim Crow and mass incarceration. Can you make a case that “true” patriots would acknowledge the difficulties of that past and present without some people seeing it as a threat to the country?

I thought of Frederick Douglass’ 1852 speech “What, to the Slave, is the Fourth of July?” It is a searing indictment of the hard truths of our history, of plunder, of enslavement, of a range of exploitative and unjust actions at the highest levels. At the same time, I’m a black person in America so I have no choice but to fight for the promise of America.

Thinking of Douglass’ speech also takes me to Dr. King’s speech [in 1963] at the March on Washington. People often forget the first half of that speech, which is, very much like the Douglas speech, a searing indictment of the injustices of American democracy. So we have to embrace all the contradictions in American democracy if we want to imagine a vision of a future that’s about freedom and inclusivity and opportunity and justice.

You’ve spoken about being a new father. What lessons about our history do you want your child to learn?

I think a lot about “what are the lessons I want to teach my child,” and it’s irresponsible to not teach our kids about hard truths. It doesn’t mean we can’t envision a better future, but we have to look back at our past and all the ugliness there, and at the promise and the possibility of people who fought for a better life who lived in even harsher conditions than we do today.

Let’s talk about the pandemic. Do you think that this crisis has changed the way that people view our country, our fellow citizens and the role of government in society?

I think most Americans probably would agree that part of the role of government is to create safety and security from threats, including threats of a deadly virus. I think we all saw the failure of the Trump administration to act in the early days of the pandemic. We saw the fundamental lack of support for families, for small businesses that people felt early on. That initiated a reassessment of what the government can and should deliver. It’s definitely spurred calls for a more inclusive economy, a more caring economy.

I think this current administration gets good marks on how they handled the pandemic, not to mention all the efforts to get people back to work and respond to the economic crisis. So I do think we’re going to be in an extended conversation about the role of government and our obligations to each other as fellow citizens. It’s one thing to have an abstract debate about this, but we’ve just lived through unnecessary debt and pain and hardship.

There has been a lot written in the past several years about the need for a common national narrative that people can more or less agree on. Do you think we need that sort of overarching narrative?

I think we have multiple narratives and multiple traditions in this country. If I think about how I explain the story of America to my daughter, I have to offer at least two big stories. I have to offer the contradictory story of how America was founded — of genocide, of the stealing of land, of claiming other people’s land, of slavery. I have to tell that story, and I have to tell a story of hope and promise and struggle and change and transformation.

I have to tell my daughter the story of the Civil Rights Movement and the Great Society, and the moments when we rose to the occasion as a country to solve intractable problems. There has to be some commonness — something has to bind us all together in terms of building a collective identity.

“Race has always been used as a zero sum frame that for black people to win, white people have to lose, which I just reject.”

We’re getting ready to celebrate Independence Day. And there is a debate going on right now, generated by Republicans, about critical race theory, and what should be taught in schools and what shouldn’t. Proposed laws in a number of states will attempt to avoid acknowledging things about the nation’s past.

I think this is a form of what I would call strategic racism because it is a deliberate play by the right-wing for cultural power — in this case, the power of storytelling and who is the arbiter of our national story and whether we include the hard truths or not. But I’m curious about what’s underneath it? This goes to what Tucker Carlson talks about often; his Great Replacement theory. This notion that whites who have been a majority in this country will somehow be replaced by nonwhites and the fear of that transition. There is a fear of retribution and punishment. That’s an implicit acknowledgement that there’s been some wrongdoing in the past.

Political pundits and commentators often say we need more conversation. With the New Deal one vision of society won and a different vision lost. One side also won in the Civil War, and the other side lost. Doesn’t one side need to be politically victorious because conversations only get you so far?

I don’t think we need political theater to masquerade as meaningful debate. We need accountability for the anti-patriotic behavior of Jan. 6. I don’t want to have any more conversation. I’m not interested in a debate about the alternatives between authoritarianism and fascism, systems that take away people’s freedoms. They have to be defeated.

And we had a system of Jim Crow authoritarianism in Southern states for over a hundred years after the Civil War, [and] it had to be defeated. Race has always been used as a zero sum frame that for black people to win, white people have to lose, which I just reject. Actually, white people have benefited a lot from the struggles of black people to make our country more just.

Most people want to feel patriotic, from standing for the National Anthem at baseball games to some of our other collective rituals. Most people want to embrace their country and feel positively enough about the United States to want to fix its flaws. So what does progressive patriotism look like to you?

It’s work. It’s not going to come as a result of one magic flowery speech. It’s work. It’s the commitment of figuring out our joint future with people different from you or me. I think a progressive patriotism has a very broad sense of belonging and inclusivity, which is one of the best aspects of the American tradition. An important part of our history is being welcoming to outsiders. What is the common goal that we can all collectively agree we are striving toward? And maybe it’s not going to be 100% of folks. I’ll be happy with 60%. Then you keep talking to the other 40%. Democracy is work. Then we will pass the baton to the next generation.

CAPITAL & MAIN IS AN AWARD-WINNING NONPROFIT PUBLICATION THAT REPORTS FROM CALIFORNIA ON THE MOST PRESSING ECONOMIC, ENVIRONMENTAL AND SOCIAL ISSUES OF OUR TIME. JOIN OUR EMAIL LIST TO STAY UP-TO-DATE WITH OUR LATEST NEWS.