food From 3,000 meals a week to Thanksgiving in a food truck

What you don’t have is somebody going directly to the homeless population. So, once we earn the nonprofit status, once we can get some grant money, the idea is to get a mobile kitchen and put it out on the road. 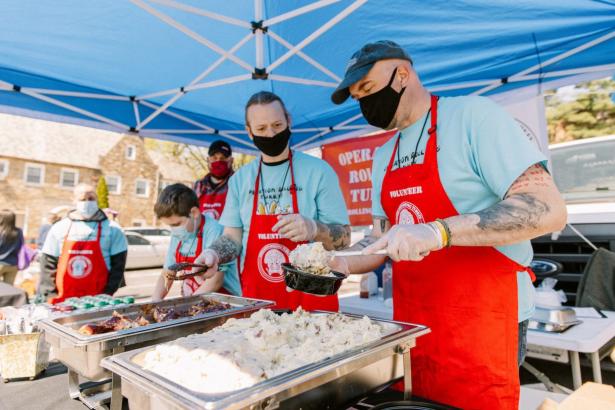 Forty-eight-year-old Jim Berman wouldn’t call his first food job “cooking,” per se. At age 15, he left his hometown of Pittsburgh and went to Canada for the summer to wait tables at a fishing club that needed help in the kitchen. He was what he called the “assistant-assistant-assistant assisting cook,”which meant he filled soup cups and cut lemons. While studying economics in college, and in need of an apartment, he passed a restaurant looking for a “grill cook, experience required.” He’d cooked on the grill at his parents’ house; it wasn’t exactly a lie. He got the job. After that, it was on to Santa Fe to more formerly pursue his career; then to Delaware, where in January of 2020, he became the executive chef at Wilmington’s Chase Center, the area’s largest special event facility, formerly known as Biden campaign election headquarters. Less than three months into the job, he laid off nearly 80 people. Coupled with his big-venue know-how and a network of chefs on forced sabbatical, Berman’s familiar DNA-level need to nourish people practically wrote the next chapter for him.

I inherited a staff in a large facility doing a lot of business—3,000 meals a week. At the end of March, I laid off basically my entire staff. Here’s the new guy and one of my first official responsibilities at the Chase Center was making that phone call. And then, in the middle of April, I was laid off. So, I went from a 60-hour workweek to zero. I would say at our lowest point we had maybe five people still on payroll.

Through the summer, I volunteered with World Central Kitchen; commuting daily to and from Wilmington to Nationals Park in Washington, D.C., where I was the executive chef in charge of procurement on site. The meals were distributed to community centers, first responders, and anybody who showed up at the distribution locations.

In October, I went back to work at the Chase Center part-time, doing mostly paperwork, some menu writing—pretty much anything that needed to be done; cleaning, moving tables and chairs. The building was shuttered except for very small meetings that fell under the guidelines for gatherings.

Thanksgiving was ahead. My buddy has a tiny Thai food stand in the farmers’ market, of all places—this oasis of amazing Thai food that has three bar stools and a tiny, tiny kitchen. He also has a couple of food trucks and wasn’t using them for the holiday. I said, “let’s go feed some people.”

That was really the impetus for what became Operation Rolling Turkey. It was a Friday afternoon, we were sitting there talking, and decided some people could probably use a good Thanksgiving meal. Of course, we had to do something with turkey, and we were doing a food truck. So that’s how we named it: Rolling turkey. Sounds pretty corny, let’s do it!

Like any other responsible cook, the first thing you do with such an idea is jump on social media. And, of course, just like every other food-service person, the only people I really know are food-service people. Within minutes, other chefs and cooks in the area who were furloughed, laid off, and underemployed, all responded: “What do you need? What can I do?”

For food purchases, I approached the Chase Center, and their leadership team was happy to provide whatever was left in the building. I’m also a volunteer at the Food Bank of Delaware, and they provided some food.

I didn’t want to do a traditional Thanksgiving dinner because it was kind of a hassle to roast turkey on the truck. A few weeks earlier, we had hosted the Biden campaign and I had a bunch of pastas leftover. We used broad-noodle pappardelle for the base and made a turkey stroganoff. We had a bunch of desserts left in the freezer. We had mashed sweet potatoes. The idea was hearty, flavorful. We’re founded by a group of chefs and cooks and kitchen people. So, there was no way we were going to serve something that wasn’t wholesome. And if you want to stretch your dollars, it’s a lot easier to work from scratch than it is to work from frozen and prepared. You just do what you know, what comes instinctively.

We went downtown, to the geographic center of the city. Wilmington police were there to meet us, and I thought we were going to be in trouble because we didn’t have a permit. We just rolled up with a truck and started handing out meals. But the restaurants were closed and food-assistance organizations weren’t out for the holiday, so one of the officers asked, “Hey, can we get something to eat?” We told them, “Put it out on the radio, we’ve got plenty.” We served about 150 people that day.

There was one lady who came up and said her father—or grandfather, I can’t remember—had been fighting Covid. Earlier that day he had to succumbed to it. She just didn’t want to be home by herself having a meal.

This was going to be a one-and-done Thanksgiving. But we weren’t even cleaned up on the food truck before we said, We’ve got to do something for Christmas, too. My daughter (I’ve got two; one teaching English in Korea and one an artist doing commission pieces. My son is a Marine Lance Corporal stationed in Maryland) suggested we add a “help-yourself table” where people could help themselves to hats, coats, blankets. And gosh, the response to that was overwhelming. Again, within minutes, I’ve got emails and text messages: “Hey, can we donate money so you can go buy stuff?”

The director of the Chase Center did a clothing drive in her neighborhood and brought all the product here. One of our sales folks, who was laid off at the time, hopped on the computer to look for discounted products. By the time we were done, we probably gave out five or six-thousand-dollars’ worth of coats, blankets, and hats.

It was Christmas Eve and every single thing was gone—all of our food, all the products. We did another event in January, and another in February. And then we hit a bump. The organization that oversees commerce and foot traffic within the city of Wilmington said, ‘You need to have a food establishment permit, you need to have a gathering permit,’ because we were using chafing dishes and open flame. Seemed simple enough, but the city wasn’t issuing permits again ‘until all this passes,’ and besides, they said, ‘there’s not a need.’ We knew that wasn’t true.

About three days later, a police officer in Wilmington reached out about a wellness pop-up he was doing with the Department of Health, Division of Substance Abuse and Mental Health, and the Sunday Breakfast Mission. They were giving flu shots, doing Covid tests, and he thought having meals would help capture folks who needed those services. Now we had a partnership with some official organizations and a venue that would attract the folks we were looking to serve.

I wanted to have seed money to get out on the street, to put up a website, to start the process of getting our 501c3 status so we could seek support through community foundations and businesses. On the back of a napkin, I scratched out some numbers: Alright, it’s going to cost us about $1,800 to get this thing going. Let’s ask for two grand and see what we can do that to make some magic. We broke $6,000 in March. As of last month, we are a Delaware nonprofit. We are now the Rolling Turkey Foundation.

In Wilmington, the food bank does a phenomenal job of getting food and ingredients to people with its mobile pantries. Meals on Wheels takes food directly to people’s homes. Then you have an organization like the Sunday Breakfast Mission, which feeds folks in temporary housing at the mission itself. What you don’t have is somebody going directly to the homeless population. So, once we earn the nonprofit status, once we can get some grant money, the idea is to get a mobile kitchen and put it out on the road; see folks on a regular basis, through that truck—or two, or three—and possibly employ some people. Then maybe we blueprint this thing and put it into other secondary-sized cities. Philadelphia and New York have emergency and crisis-response food resources. But what about a smaller city like Trenton, New Jersey or Wilmington?

I would love to be in a spot where we can respond quickly—where there’s a disaster, or just some community needs. Like with Texas, when it had that recent weather situation: we could say, All right, guys, it’s Monday. Let’s load up and be in Texas by Wednesday. Let’s just start feeding some people. There are other organizations out there—Mercy Chefs, World Central Kitchen, Team Rubicon. I think we can help add to the solution.

I created a text group on my phone called the ‘Turkey Bones.’ These are the folks who, for one reason or another, have kind of been folded into a loop—for their marketing expertise, or because they’re kitchen grunts with the ability to get stuff done. I think there’s about eight now. Every activation, they’re there.

I’ve had an interesting work history over the years. There’s been ups and downs, and I certainly made enough left turns and wrong turns and bad decisions. That’s why I think it’s so much more meaningful for me to be part of a solution, rather than just a profit-generating entity. And there’s nothing at all wrong with the larger corporations—I work for a large corporation right now, and they have been incredibly supportive of what I’m doing. So, I think it’s important to note that. At the same time, I’m getting older, I’d like to help folks who truly need help. And this is one of those opportunities. This is not my leap toward sainthood. This is me trying to right some wrongs, make some peace with the universe; recognize that, hopefully, I’m not beyond redemption. I don’t need to be rich. I’m a cook, that’s never going to happen anyhow.

For chefs and cooks and kitchen people and hospitality people, the term “hospitality,” if I’m not mistaken, actually goes back to the Bible. And it’s not necessarily the mint on the pillow at the hotel, it’s embracing your neighbor with open arms. And from a kitchen and chef and cook perspective, this truly is what we know.