labor Private-Equity ‘Vampires’ Run Into a Wall of Worker Resistance

Members of IUE-CWA Local 84811 have launched a major campaign against the plant closing, displaying an attitude not seen nearly enough in the U.S. labor movement, which has witnessed 91,000 plant closings across the country since 1997. 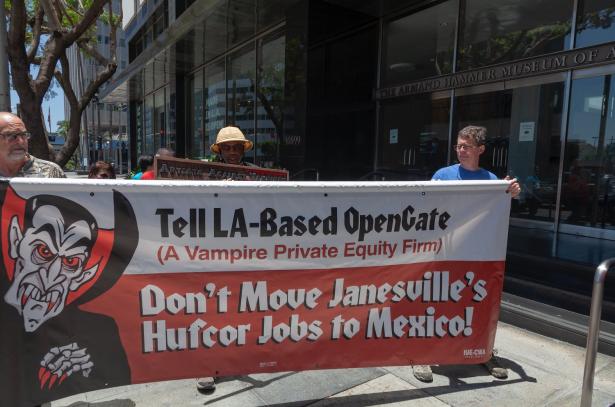 Protesters in Los Angeles, California, against the closing of Hufcor in Janesville, Wisconsin.,

At the peak of the Great Recession in 2008, General Motors was bailed out by U.S. taxpayers and survived. Bail-out money in hand, GM sharply increased its production in China and other low-wage nations on its way to recovering its past heights of profitability. But back in Janesville, Wisconsin, GM closed its plant, costing an estimated 9,000 jobs and widespread social misery that has not abated.

And now Janesville finds itself again at the mercy of another far-off corporation. OpenGate Capital, a Los Angeles-based private equity firm, is planning to close the 120-year-old plant of a company named Hufcor Inc., wipe out about 160 jobs, and ship them off to Monterrey, Mexico.

Hufcor has been an established, familiar fixture in the community, and workers are intent on keeping it that way. Members of IUE-CWA Local 84811 have launched a major campaign against the plant closing, displaying an attitude not seen nearly enough in the U.S. labor movement, which has witnessed 91,000 plant closings across the country since 1997.

Rather than reacting with fatalism, the union local has staged splashy, energetic public events, petitioned across the community, distributed signs, and promoted the fight against OpenGate on billboards and the Internet. 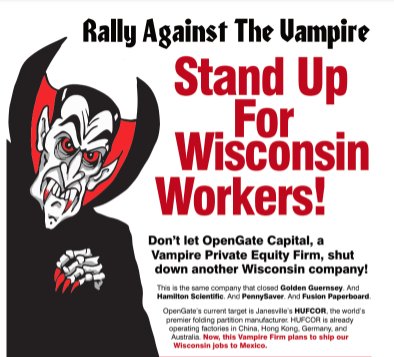 The union blanketed the city with the message that OpenGate is a “vampire” sucking more of the lifeblood out of  Janesville, and must be stopped at Hufcor. “If they send our jobs to Mexico, OpenGate is impacting whole families, not just their employees,” says Local 84811 President Tom Casey. “All to save a few bucks.”

Michelle Hill, who has worked at Hufcor for twenty-three years, told a community rally she was “sad and scared” but mostly “pissed.” She and her husband both work at the plant, and face a dire future if OpenGate succeeds in shutting it down; the loss of both of their income is scary in a community where family-supporting jobs are scarce.

The battle in Janesville reflects the growing economic polarization as fast-climbing wealth for private equity firms and the financial industry in general is coupled with a decline in the middle class in towns like Janesville. “We have to fight,” warns Local 84811 member Jerry Hupper  “We’ll be losing the middle class if we don’t fight these investment companies.”

The GM plant closing is a constant reminder of family-supporting jobs being destroyed by profit-maximizing corporations. Janesville has endured the same kind of social devastation that has so often followed in the wake of U.S. deindustrialization, which wiped out 32 percent of factory jobs from 2000-2010.

Within three months of the GM shutdown, the number of abused women in Janesville seeking shelter nearly tripled. Rising domestic and street violence, depression, suicide, alcohol and drug abuse, poverty, homelessness, declines in health, and food insecurity are among the impacts visible in the city.

But these potential effects are apparently not uppermost in the minds of OpenGate CEO Andrew Nikou and other investors in the $5 billion firm. 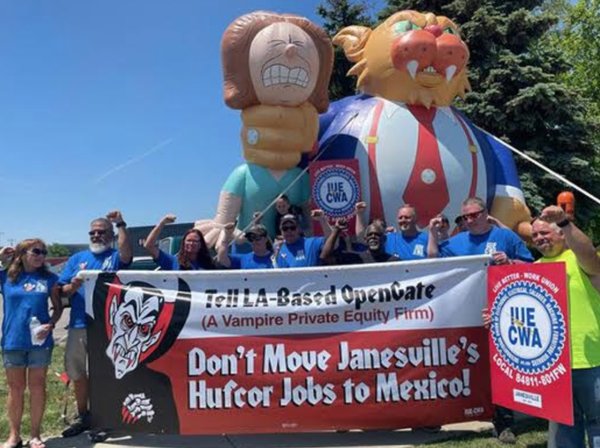 Los Angeles protesters against the closing of Hufcor in Janesville, Wisconsin.

OpenGate seems to be one of the worst actors in the already notorious private-equity industry, which has fueled the drive behind the Stop Wall Street Looting Act in Congress. The Stop Looting measure aims to curb some of the industry’s worst abuses, such as gutting newly- acquired firms for huge profits while throwing thousands of people out of work and running the newly-acquired businesses into the ground. The private-equity industry also benefits from special tax breaks, with former President Donald Trump adding an additional cut on January 5, 2020.

OpenGate, despite the philanthropic image CEO Nikou likes to cultivate, is among the worst in the industry in terms of its treatment of the workers it discards.

Even before the fight at Hufcor broke out, OpenGate had already left a trail of sudden shutdowns with no advance notice and no willingness to provide full back pay to workers or honor other commitments.

In 2013, OpenGate abruptly closed the Golden Guernsey Dairy in Waukesha, Wisconsin, providing no notice at all to the more than 100 workers who showed up for work to find the doors locked. It took nearly eight years of legal fights to force OpenGate to finally pay the full wages and severance owed to those workers.

A similar instance of no-notice closing occurred for 678 workers at the Pennysaver newspaper in California. In 2015, OpenGate failed to provide the legally required advance notice for workers at Hamilton Scientific located across several states.

And in 2014, OpenGate shuttered Fusion Paperboard in Sprague, Connecticut, shortly after signing a six-year union contract and gaining a ten-year loan from the state aimed at keeping Fusion operating in the state. The community had also assisted OpenGate on local taxes, utility costs, and other expenses.

Senator Baldwin has observed firsthand the workers’ concerns about the shutdown and is continuing to meet with impacted families in Janesville. She also sent a letter to OpenGate in which she told the company: “Your predatory actions in Wisconsin are a powerful example of the urgent need for these reforms.” Baldwin urged support for keeping the jobs in Wisconsin, but added that federal action was vital.

“It’s clear to me we need to take legislative action in Congress to rip up the predatory playbook that these private equity firms use to leave workers with nothing but pink slips and lost livelihoods,” she wrote in a Facebook post on June 30.

OpenGate’s record should be an eye-opener about the private-equity industry for the community of Janesville as well as the entire nation. As Michelle Hill said, “OpenGate is very, very greedy, and they must be stopped.”

Roger Bybee, a frequent contributor to The Progressive, is a freelance labor journalist and labor-studies instructor based in Milwaukee, Wisconsin, and the former editor of the Racine Labor weekly.

We publish multiple stories every day on our website, and also produce a bimonthly magazine featuring investigative reporting, cultural and political analysis, and poetry.