Cuba and the US: The Difference Between Dictatorship and Tyranny

By all Western standards it can be said that Cuba is a dictatorship, but it is necessary to remember that the United States is the tyranny that created it, a brutal tyranny that has been going on for at least two hundred years. 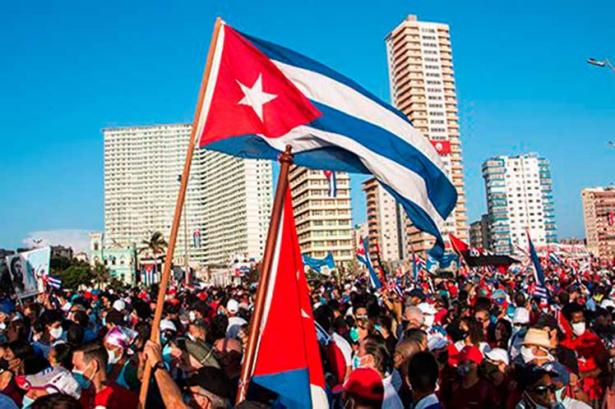 Mexico, Jul 18 (Prensa Latina) Mexican media on Sunday highlighted the overwhelming support from the Cuban people for their Revolution and the government of President Miguel Diaz-Canel after aggressions and provocations from the United States. ,

In 1997 a Cuban friend told me "Fidel is a dictator, but not a tyrant." We were in a province of Mozambique where he worked as a doctor and I as an architect. That afternoon, in a courtyard of African red ground, I did not understand his idea. It seemed contradictory. For some reason I never forgot it until a few years later, reviewing declassified documents, I thought that Washington was not a dictatorship, but a tyranny.

The trap of the words was not in the apparent contradiction of Javier's sentence but in the habitual deception that ideoléxics carry, for example, when words like "democracy" or "dictatorship" are used as if they were the Moon and the Sun: two clearly differentiated bodies, but not the only moon or the only sun in the Universe. In this way, a hegemonic power that dictates its will outside borders and lacks equal representation for all its citizens (especially for those who are not millionaires) like the United States, a paramilitary regime like Colombia, a neoliberalism imposed with blood like the Chilean, or a system like Norwegian or Icelandic are called "democracies" alike. For strategic reasons, Haiti or Honduras are not called "capitalism," even though they are more capitalist than the United States. It is not capitalism, but hegemony that defines the power and (material) wealth of a country.

Theodore Roosevelt, among many others, put it clearly: "The democracy of this century needs no more justification than the simple fact that it has been organized so that the white race gets the best lands in the New World." That democracy was adapted a thousand times to serve a minority, no longer so white but economically and financially dominant. In formal democracies, the ruling classes do not censor as in a traditional dictatorship; Critics are reduced to the silence of the mainstream media or, when these transcend in some way, they are demonized as in the days of the Inquisition.

In formal democracies, one percent only needs to convince half—plus one—of the voters to stay in political power. Not a difficult task when, for example, God is included in the package of his "values and principles." But the micro elite above does not depend on the lower half to maintain economic power. Only when that power is in question, formal democracy is replaced by fascist dictatorships, like those supported by Washington and transnationals throughout a long history. Until the middle of the 19th century, slaveholders had managed to convince a majority (including slaves) that slavery was the best regime for expanding freedom and civilization. When democracy became inevitable, they hijacked it with similar ideas: the wealth of the rich is the best way to expand the well-being and freedom of the workers.

Even so, that vague and contradictory idea that we call "democracy" is still the best utopia and the best resource of those below. But let's be clear: none, no matter how crooked, exists thanks to the powerful on duty, but in spite of them. The same are the individual and collective rights and freedoms; all are the product of endless (and demonized) struggles from below.

In the United States, racist and class principles, flags of the defeated Confederation, consolidated internal borders and spread to Latin America, where they imposed dozens of dictatorships, always in complicity with the eternal Creole oligarchy, generations before the wonderful excuse appeared of communism.

Since then, Washington and the mega-corporations have been the main promoters of communism and other left-wing alternatives on the continent. One of the first cases dates back to the 1930s when the massacres of Indians and peasants in El Salvador occurred after the Second War and the most important ally of the United States, the Soviet Union, became the only opponent with power and possible inspiration for the Third World against the old Anglo-Saxon tyranny. It is, at this moment, when the CIA was born (1947) and shortly after they created without realizing it, Che Guevara.

When the CIA and the UFCo managed to destroy "the communist regime of Jacobo Árbenz" in 1954, one of the only signs of democracy in the region, the young doctor Ernesto Guevara had to flee to Mexico, where he met other exiles, the Raúl brothers and Fidel Castro. When the Cuban Revolution triumphed in 1959, Guevara warned: "Cuba will not be another Guatemala." In other words, its independence from the US empire would not be boycotted with first media bombings, induced mobilizations and later military attacks, as in Iran, as in Guatemala. When four months later Fidel Castro visited the White House to confirm trade and diplomatic relations with Washington, Nixon, Eisenhower, and the CIA already had another invasion in mind. The long custom of overthrowing pro-independence alternatives and the arrogance by an overwhelming military and media force so blind, that they could not foresee neither a shameful defeat nor an insurmountable trauma in the Bay of Pigs. The CIA agent in charge of operations in Guatemala and Cuba, David Atlee Phillips, wrote that the problem with the failure was that Che and Castro had learned from history and Washington had not.

But Che Guevara is described as a murderer for having ordered the summary execution of 200 criminals from the Batista regime (the CIA reported that it was nowhere near the number executed by the previous regime) while Cuban terrorists such as Posada Carriles, Orlando Bosch, and many others who dedicated themselves to planting bombs in airplanes, ships, hotels, diplomatic cars, such as Orlando Letelier's, and collaborated with genocidal mafias such as Operation Condor, were protected by Washington. The massacres of hundreds of thousands of victims in a few decades in Central America by Washington and the CIA were to bring peace, democracy and freedom to those lands. (After Stalin, those killed for political reasons in Latin America far outnumbered the victims in communist countries under the influence of the Soviet Union.)

The same practice, the same interests, the same discourse of the slavers of the previous century with new ideoléxicos. From the logic of history, Fidel Castro and the dozens of Augusto Pinochet's are not the same thing, although in simplified language both can be labeled as dictators. Cuba and Che are also a direct consequence of Washington's imperialism, but for opposite reasons.

For that reason, although by all Western standards it can be said that Cuba is a dictatorship, it is necessary to remember that the United States is the tyranny that created it, a brutal tyranny that has been going on for at least two hundred years. Cuba was the first great defeat of that arrogance and, for some reason, it has managed to resist for 60 years.

Is a reverse dictatorship necessary to defeat the two-century tyranny? We don't like the answer of the story. But it is clear. Although (or because) we are radical democrats, we are not going to go out and throw stones at the strangled island in the name of freedom. We could never side with the mercenaries.

Jorge Majfud is an Uruguayan-American writer and an associate professor at Jacksonville University.