The National Domestic Workers Bill of Rights, reintroduced on July 29, would establish a new set of standards for the people who work in our homes and take a vital step towards racial and gender equity. 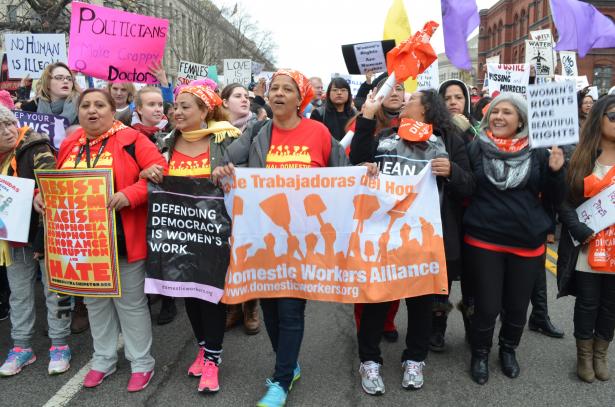 As we look ahead to the post-pandemic future, the lessons learned over the past 17 months are never far from mind. We learned who the essential workers are, and what happens when their invaluable contributions to our society and economy are suddenly disrupted. We learned that the people we rely on daily—care workers, service workers—for the things we need most​​ are often women, especially women of color and immigrants. And we learned that many policies that are meant to protect our health and safety in times of crisis too often fail many of the people most at risk.

The pandemic isn’t over, but the task of rebuilding our economy for the next era has begun. This is the moment when we get to shape what an equitable society looks like—to make sure women and women of color are not only included, but at the forefront, of how we think about a fair and just economy; to design jobs of the future that can meet the changing needs of our society and support families; and to prioritize racial equity as a fundamental element of our economy.

That’s why today we’re re-introducing the National Domestic Workers Bill of Rights, which would ensure that the essential workers in our homes—the nannies, the house cleaners, and the home care workers (e.g. personal care aides and home health aides) who do the work that makes all work possible—have the rights and protections they need and deserve. Currently, there’s no national law granting basic labor protections to domestic workers, and only 10 states have implemented statewide initiatives.

When the pandemic shut down our economy and forced us to shelter in place, the domestic workforce, composed of nearly 2.5 million people in the U.S., was especially devastated. Domestic work, by definition, takes place inside someone else’s home. For them, remote work does not exist. The National Domestic Workers Alliance survey, “6 Months in Crisis: The Impact of COVID-19 on Domestic Workers,” reported that by March 2020 more than 90 percent of workers lost jobs due to COVID-19; workers didn’t know when they would get their jobs back; and six months later they were earning lower wages than they were before the pandemic. These are catastrophic circumstances for a workforce that is 91.5 percent women and 52 percent Black, Hispanic, or AAPI, many of whom are already earning poverty wages (the typical domestic worker earns $12.01 per hour and is three times more likely to live in poverty than other workers).

Domestic work has always been associated with and performed by women, especially women of color, and some of the first domestic workers were enslaved African women. The devaluation of this critical work was codified when domestic workers were specifically excluded from the worker rights and protections of the New Deal in the 1930s, ensuring that the legacy of gender and racial discrimination in domestic work continues today. But thanks to generations of organizing among domestic workers, we now have the opportunity to enact a federal policy that can establish a new set of standards.

The National Domestic Workers Bill of Rights provides domestic workers with common workplace protections, like paid overtime, paid sick days, safe and healthy working conditions, and meal and rest breaks. It also establishes new protections to address the unique challenges of domestic work, like written agreements, fair scheduling, and support for survivors of sexual harassment. It creates a standards board composed of representatives of workers, employers, and government, and ensures these workers’ rights can be implemented and enforced with mechanisms that protect against retaliation and promote public education and awareness.

This legislation is historic. Supported by Labor Secretary Marty Walsh, Vice President Kamala Harris, and President Joe Biden, it’s a step towards racial and gender equity at a time when the inequitable nature of our economy is evident. It addresses policy inequities almost a century old, and builds towards an economy that values care work. It’s the legislation we need to ensure we are rebuilding a more resilient and just foundation for our shared economic future because—as we have consistently been reminded over the past year and a half—we are all in this together.

When the National Domestic Workers Bill of Rights was first announced in 2018 and introduced by Rep. Jayapal alongside then-Senator Harris in 2019, we were feeling the power of the 2018 midterm elections during which a historic number of women—including women of color—ran for and were elected to Congress. We knew this legislation was critical then. In the wake of the coronavirus pandemic, these changes are even more imperative.

As we see a rise in new COVID-19 cases fueled by the Delta variant, which is expected to peak in the coming months, it’s clear that, while the worst may be behind us, there are still very difficult, uncertain times ahead. Before then, we have a once-in-a-lifetime opportunity to transform domestic jobs into sustainable and secure jobs for the essential workers of today and the growing care economy we’ll need for the future. Let’s get to work.