labor Infrastructure Bill is Huge Opportunity for Women in Trades 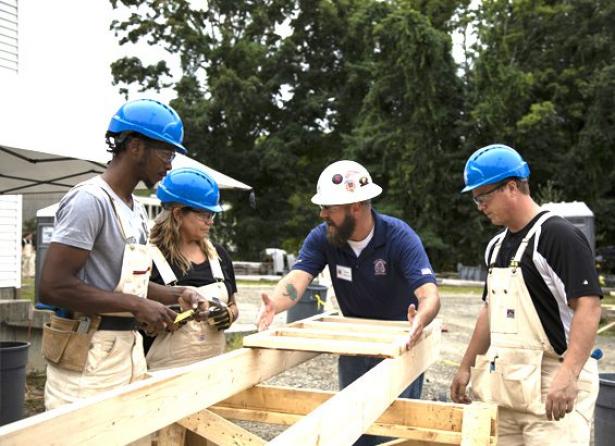 THE INFRASTRUCTURE BILLS now making their way through Congress offer a once-in-a-generation opportunity to crush barriers to women, including women of color, that keep them from achieving good careers and better lives, as they do the work of rebuilding America.

I recently watched a single mom graduate from our carpentry pre-apprenticeship. She’s an athletic person who had loved the constant motion of working as a nursing assistant in a hospital, but the pay wasn’t great. When an opportunity came to be trained as a correctional officer for higher wages, she jumped, but then chafed at all the sitting around and three long years of working nights. She approached me after the graduation with her two young children and said, “I just have to thank you. You have no idea how this will change our lives. When I got the letter saying I was accepted, my son asked, ‘Does this mean you’ll be home at night?’ ‘Yes, honey, that’s what it means.’”

Starting wages as a union carpenter apprentice are higher than she’d made in either job. She’s getting an apprenticeship training worth $48,000 for free. There’s high quality health insurance and a pension. And she’ll be home for her kids.

When I started as a carpenter apprentice in 1989, women made up somewhere between 2 percent and 3 percent of the national construction workforce. Fifteen years ago, we were at about 3 percent; 2020: 4 percent. Not much progress. In 2009, the Boston Carpenters Union co-convened the Policy Group on Tradeswomen’s Issues to focus on raising the numbers. The first game-changer we identified was that the previous 30 years of recruiting and training women had failed, in part, because it was a supply-only strategy; we had to make sure there was demand – that contractors were hiring women. We developed best practices for contractors and end-users to meet workforce goals on public and private construction projects. The numbers started increasing. You’ll find our how-to manual, Finishing the Job, at policygroupontradeswomen.org.

Demand is working in Massachusetts. Since 2013, 38 projects worth $7.2 billion have used these best practices and have achieved 7.33 percent women’s hours, almost double the current national average. Over half of the women are women of color. At a conservative average of $65 per hour in total compensation, that’s $80 million dollars that’s gone into women’s pockets, to their families, and their communities. This would not have happened without two things: 1. workforce hiring goals 2. effective enforcement of the goals.

We’re also growing the supply. Because of the increased demand, we’ve worked hard to expand the pipeline. Students: vocational high schools are now 20 percent women in construction shops. Apprentices: women make up 10 percent of union apprentices — one of the highest, if not the highest, participation rate in the US. Adult career seekers: We have a growing list of over 800 women who have the desire and meet basic requirements to enter the trades – they just need their first job.

Workforce goals plus effective compliance open the door for that first job.

Tradeswomen aren’t a niche issue. Women make up 50 percent of the workforce. In Massachusetts ,75 percent of the people living in poverty live in female-headed households. When women can earn a sustainable wage, the ripple effects are enormous, to them, their families, and their neighborhoods. The infrastructure bill that passed the House on July 1 includes participation goals, but other measures are needed too. The final bill needs to include:

Women have been doing heavy physical labor from the dawn of time, and more than 308,400 women already work frontline jobs in the US construction industry. If we do this right, many more women could join us.We need senators to champion these improvements to the infrastructure bills and help crush the remaining barriers so that workers of any race or gender who want a career in construction can come and get it.

Liz Skidmore, a union carpenter, is a business representative/organizer with the North Atlantic States Regional Council of Carpenters.