Congress’ power of the purse was ignored, but lawmakers remain divided over how to respond. 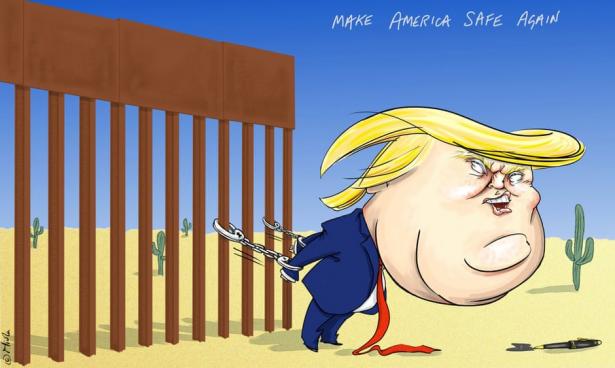 Pentagon records obtained by POLITICO paint the clearest picture yet of how far the Trump administration went to get around Congress and speed the diversion of military construction funds to build its border wall in 2019.

The diversion, totaling $3.6 billion, disrupted scores of improvements for military operations and the quality of life for troops and their families. The newly released documents provide the first-ever look at the inner workings of how that money was moved around — and it’s not a pretty sight for congressional committees, which were left in the dark and denied basic answers about the accounting maneuvers.

The Defense Department ignored statutory language in the appropriations laws specifying how the dollars were to be used. Millions of dollars were moved to never-before-seen ‘’project lines” created by the comptroller and then written into the military services’ construction budgets without the knowledge of Congress. And even in the case of the Navy, DoD skipped past customary transfer requirements and made those dollars immediately available to the Army Corps of Engineers to write checks on those accounts.

DoD continues to defend its performance. But the records were sensitive enough that it took a yearlong struggle by POLITICO to obtain just those covering the Navy. The department took nine months to respond to a Freedom of Information Act request, and even then, the Comptroller’s office withheld or failed to include the most relevant documents. It took another three months before this was corrected, a full year after the FOIA was filed in July 2020.

With Trump gone and a new White House trying to recover the wall funds, many in both parties want to put the episode in the rear-view mirror. But more than $1 billion is not coming back. And left behind in its place is a legacy of distrust and nagging questions as to how Congress can better protect its constitutional power of the purse.

“I think we have to keep this on our radar screen,” said Senate Armed Services Chair Jack Reed (D-R.I.), who also sits on Appropriations. “Forewarned is forearmed.”

“If we should have another situation where a president wants to take money away from the military and put it into a domestic, personal, political agenda, then we should be able to stop that,” Reed added.

Without doubt, the Pentagon enjoyed immense discretion once the White House invoked its singular construction powers after declaring a “national emergency” in early 2019. The relevant statute, enacted in 1982 and known in political shorthand as 2808, allowed DoD to proceed “without regard to any other provision of law.”

But what made the ensuing process so remarkable was its lack of transparency: It hid from Congress and the federal courts the full scope of what was being tossed aside in favor of the wall spending.

Deciphering the diversion was no easy matter for judges with no grounding in the appropriations process. There were repeated assurances that DoD was only “reprioritizing” dollars already in its hands. If a judge asked for more details, the administration calibrated its answers to explain as little as possible.

“You said 'reprioritize,’” asked U.S. Circuit Judge Daniel Collins in a 2020 hearing. “I want to understand as best I can … what actually happens. Is there a transfer and a reprogramming of money from one account to another account and then an expenditure differently? How does the money move in this case?”

“No, your honor, there’s not a transfer or a reprogramming of any kind,” Collins was told by a Justice Department attorney representing the administration at the hearing.

That answer was correct as far as it went. But the budget records plainly show that a big part of the story was left out. How could it be there was no “reprogramming of any kind?” Because DoD had exempted itself from the budget rules requiring such a reprogramming and notice to Congress.

Indeed, the whole exchange was akin to a city mayor telling his local traffic court judge that he was innocent of speeding — without explaining that he’d exempted himself from the speed limits.

A closer look at the budget ledgers released to POLITICO helps to illustrate this. The documents only apply directly to the Navy, but other military services saw the same pattern of transactions.

One document dated June 18, 2019 shows the fiscal 2019 Navy appropriations proceeding on course with DoD approvals, pretty much as Congress had anticipated.

DoD had withdrawn its prior approvals and “deferred” further action on eight overseas projects for which Congress had appropriated $205.8 million to the Navy. Two-thirds of those funds carried with them statutory requirements that the dollars be spent “outside the U.S.” Nonetheless, DoD set out to do the opposite.

The full $205.8 million was “administratively realigned” with a newly created project line for the wall, inserted into the Navy’s construction budget under the heading “CONUS UNSPECIFIED.”

That sum was then “sub-allotted” fully to the Army Corps of Engineers for construction of the wall. This allowed the Corps to immediately write checks on the Navy account, avoiding a required transfer between the two services.

Looking back, all these shortcuts were made easier by the budget exemptions assumed by DoD.

The Impoundment Control Act, adopted in response to Richard Nixon’s power grabs in the 1970s, went by the wayside early. That law requires a “special message notification” to be filed with the Government Accountability Office whenever a department defers prior appropriations such as happened with the eight Navy projects. No such notice was ever given, the GAO confirmed.

GAO has made no ruling on the matter, but DoD’s “administrative” realignment of the Navy funds had all the markings of a required reprogramming. As defined by GAO, a reprogramming occurs when an executive agency shifts funds “within an appropriations account … to use them for purposes other than those contemplated at the time of appropriation” by Congress.

In this case, the new Navy project line for the wall didn’t even exist at the time Congress appropriated the funds in the fall of 2018. Moreover, judging from its past decisions, GAO would typically weigh the tightly prescribed rules which have long governed any changes in military construction appropriations.

The Pentagon devotes pages to reprogramming procedures in its financial management regulations. Those rules are then referenced by statute in the military construction appropriations bills. And two of the Navy projects here — one in Germany and another in Bahrain — fell squarely in the title covered by this language in the fiscal 2019 appropriations act.

As to the “sub-allocation” of Navy funds to the Army Corps, that also required some sleight-of-hand.

In fairness to DoD, there are ample precedents where some military services “sub-allot” their annual construction funds to the Corps. But the procedure is so rarely used by the Navy that it’s a stretch in this case — and one seemingly designed to avoid telling the courts a diversion of this size had required transfers.

The Navy has its own engineering command, NAVFAC. In fact, a DoD directive — updated just a year before the diversion — designated NAVFAC to be the lead agent for Navy-funded projects in the U.S.

In the past five years, only 13 out of 287 Navy’s military construction projects required any such sub-allocation of funds to the Corps, NAVFAC told POLITICO. That’s less than 5 percent — compared with the 100 percent sub-allocation in the wall diversion.

“The Department used the same procedures in providing funds to [the Corps of Engineers] for 2808 projects as it has used for decades,” said Christopher Sherwood, a DoD spokesperson charged with defending the Comptroller’s office. “The components sub-allotted the funds to the Army for use by [the Corps], thus all funds retained their original appropriation identification. The funds were neither transferred nor reprogrammed

As a West Point graduate and Armed Services chair, Reed was most sensitive to the diversion’s impact on the military, especially its personnel. From Kentucky to Maryland and North Carolina, schools, day-care facilities, and water treatment improvements were caught up in the mix, affecting troops and their families.

But from his seat on Appropriations, there’s no ignoring that “the lack of transparency is a problem,” Reed said.

David Rogers (Senior Congressional Reporter) has covered Congress for better than 30 years and was an early addition to POLITICO in January 2008.

Rogers broke into newspapers in New Jersey in the ’60s with the Perth Amboy Evening News, later The News Tribune in Woodbridge, N.J. Drafted and sent to Vietnam, he served as a combat infantry medic with the 1st Division in 1969. After coming home, he returned to reporting in New Jersey but then left in 1971 to go back to school in Massachusetts, where he signed with The Boston Globe two years later.

Rogers covered Boston’s neighborhoods, school desegregation and, ultimately, City Hall before the Globe sent him to Washington in late 1979. Congress has been his chief focus since. The Wall Street Journal picked him up in 1983, and he remained there for 24 years before being bought out in December 2007 with the Rupert Murdoch takeover.

Much of Rogers’s early education in Congress came from the Massachusetts delegation, which then included Speaker Tip O’Neill and senior members of the House Appropriations Committee, who encouraged him to cover that panel when few other reporters did on a regular basis. His Vietnam experience fed an interest as well in the covert wars of the 1980s, and his reporting disclosed the U.S. mining of Nicaraguan harbors as well as earned him a footnote — though not a movie part — in “Charlie Wilson’s War.”

Rogers is a graduate of Hamilton College (1968) and the Harvard Graduate School of Design (1973). He is married and the father of twin sons.