Vast Stretches of America Are Shrinking. Almost All of Them Voted for Trump.

Ninety percent of counties that lost population in the last decade backed the ex-president. 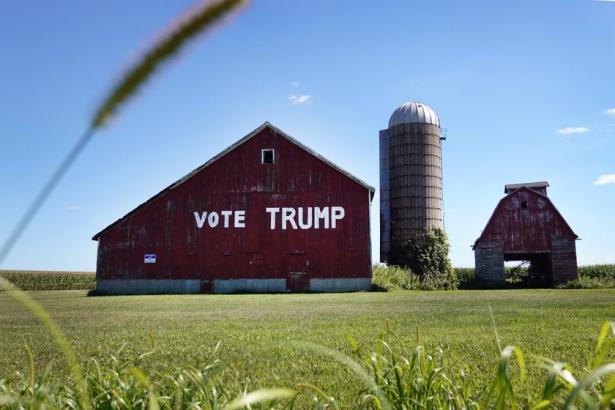 Donald Trump and the Republican Party he shaped represent the fading face of the United States, winning over an older, more rural, and overwhelmingly caucasian bloc of voters that reflected the country’s past more than its more urban and diverse future.

The latest data from the 2020 Census, which the government released on Thursday to kick off the congressional redistricting process, illustrate that fact in incredibly stark terms. It shows that the white population fell for the first time in history during the last decade, and that Americans continued to cluster in growing cities and suburbs, whether in Texas, Georgia, Virginia, or New York.

Perhaps most strikingly, while metro areas grew, vast stretches of the country continued to bleed population. About 53 percent of all U.S. counties shrank between 2010 and 2020. You can see them in the sea of burnt orange on the graph below, rural regions and small towns that often have few residents to begin with. In total, they were home to about 50.5 million people in a nation of more than 331 million. 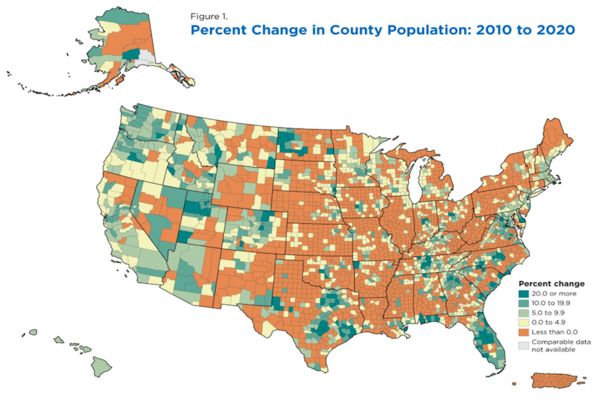 This isn’t a new story, per se. Rural America and small towns have been losing residents for decades. But the trend seems to have accelerated. From 2000 to 2010, for instance, only around one third of all counties lost residents.

Given what we already knew about Trump’s base of support, it seemed likely that most of these emptying counties voted Republican in the last election. But how many, exactly? Mark Muro of the Metropolitan Policy Project at Brookings ran the numbers for me. He found that, in the 1,636 counties that shrank during the 2010s, the former president won a majority of votes in 90 percent of them. (Muro’s team had to exclude Alaska from its numbers because of a technical glitch.) If a corner of America is depopulating, it is almost certainly part of Trump country.

This is not to say that Trump country on the whole is in decline. The former president only received about 19 percent of his 74 million votes from counties with shrinking populations, according to Muro and his team’s analysis. Overall, the counties where he won added 7.8 million people during the previous decade. But Biden counties nearly doubled that total, expanding by 14.9 million individuals. Blue America is driving America’s population growth.

It’s unclear at this point whether the population trends of the past decade are set to continue. Muro noted to me, for instance, that metro-area growth softened during the last third of the 2010s, pre-pandemic. It’s also possible that the post-COVID acceptance of remote work could be a countervailing force that spreads Americans around ever-so-slightly more outside of big blue cities, though so far the pandemic doesn’t seem to have fundamentally changed the country’s moving patterns.

But the fact that places with diminishing populations so overwhelmingly backed our last president is one more data point in a bigger story about how the country has been polarizing between thriving metros dominated by Democrats and increasingly conservative communities that are either growing more slowly than major cities or are in outright decline. This is true both demographically and economically (though of course those things are intertwined). The Metropolitan Policy Project has previously found, for instance, that Biden counties generated 70 percent of the country’s GDP. “Republican counties represent a waning, traditional economic base, situated in struggling small towns and rural areas,” Muro told me. “And the Census story underscores the sense that growth, in the most literal sense, is somewhere else. Prosperity is out of reach.”

Pundits spent years and untold pixels arguing about whether “economic anxiety” actually motivated many Trump voters, an idea that seems shakier as time goes on and conservatism delves deeper into its antivax, anti-CRT politics. What’s more obviously true is that a large share of today’s Republicans live in parts of the country, including deindustrialized rural areas, that are simply remote from the sort of institutions, from government to colleges to major corporations, that tend to generate wealth and growth . The political tragedy of America’s shrinking communities is how that alienation has help led them to embrace a reactionary populism dedicated to waging culture wars and leveraging our outdated electoral structure to make sure a minority of the population can continue to govern rather than, say, taking steps that might actually revitalize small towns and farming communities. The sort of robust immigration and public investment favored by progressives might help bring a place back to life, after all; owning the libs for the next decade or so will not. Trump voters, regrettably, have made it clear which they care about more.

Support Slate's politics coverage.  Slate is covering the stories that matter to you.  Become a Slate Plus member to support our work.  You'll get unlimited articles and a suite of great benefits.  Join Slate Plus.