We have not fully reckoned with just how much death is directly attributable to Donald J. Trump. There is a compelling argument to be made that he has achieved the remarkable feat of having personally caused hundreds of thousands of people to die. 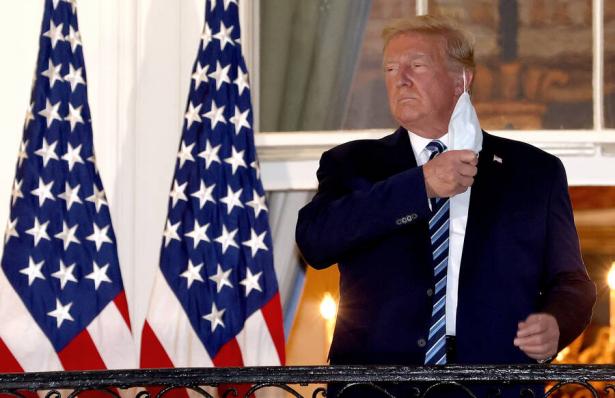 Photo by Win Mcnamee/Getty Images // In These Times,

emergency rooms once again overflow with Covid patients and hospital systems in several areas near their breaking point, I cannot help but think about blame. There is plenty to go around, beginning with elected officials at every level and going right up to god. But I do not believe that we have all fully reckoned with just how much death is directly attributable to Donald J. Trump himself. There is a compelling argument to be made that he has achieved the remarkable feat of having personally caused hundreds of thousands of people to die.

I am not speaking here in the broad, generic sense: ​“Donald Trump was president when the pandemic struck, and the federal government’s response was flawed, therefore all of the deaths are his fault.” Nor am I speaking in the most basic partisan political sense: ​“Donald Trump was the leader of the Republican Party, which has institutionally rejected public health guidance, and therefore he is responsible for these deaths.” What I am saying is that the reptilian little mind of Donald J. Trump is the single most important thing that led to more than 600,000 Americans dying of Covid so far, and that it is also probably fair to say that his actions caused countless more deaths worldwide.

There is no doubt that many national, state and local political leaders failed in the early days of the pandemic. Some combination of laziness, ignorance and political cowardice caused politicians from New York to Alabama to fail to properly and quickly follow scientific guidance in a way that would have minimized the spread of the coronavirus early on. Furthermore, the federal government utterly failed to coordinate a competent national policy response, making the useless patchwork of varying state rules a foregone conclusion, and dooming us all to the prolonged nightmare that we are still suffering.

Consider another world in which a different, generic Republican had been president in 2020 — Mitt Romney, or Mitch McConnell, or some other replacement-level politician who generally embodied the Republican Party’s beliefs. It is easy to believe that that person would have fought against providing Covid relief to the poor, and rushed to protect real estate interests at the expense of renters, and maybe even advocated exempting churches from the shutdown rules to score political points. All of those things are characteristic of Republicans. What I do not believe is that the average Republican president would have decided, ​“I am going to sow doubt about wearing masks during a pandemic that is spread by airborne droplets.” I do not believe that the average Republican president would have decided, ​“I am going to loudly and publicly cast doubt on the guidance of my own scientific personnel and advocate for a host of quack remedies just because I like being the center of attention.” Those are things that only Donald Trump would do.

And he did, and now 40% of our fellow citizens won’t wear masks and we can’t convince huge swaths of the country to get vaccinated and therefore some states are seeing their worst Covid numbers since the pandemic began, despite the widespread availability of effective vaccines. This insane and unnecessary state of affairs is traceable to the fact that Donald Trump, the man, is a fucking stupid person. After many years with Trump as the leader of the Republicans, we tend to assume that his own characteristics are those of the party. But it would have been wholly unremarkable in the very recent past for a Republican president to do all the typical bad things that Republicans do, but also to follow the guidance of the CDC during a public health emergency. The difference between anti-vax lunatics and staunch anti-maskers being a tiny percentage of Americans and being the enormous portion of Americans that they are today is Donald Trump. He set this tone from the very top. He doubted from the beginning. He downplayed all of this from day one. His cowardly party followed him, and just like that, wearing masks were a political issue, rather than a common-sense one. It did not have to happen.

I am not excusing the rest of the political class, by any means. In some ways, they are even more loathsome than Trump himself — many of them followed his lead for purely political reasons, even though they understood well that he is a dangerous moron. But the fact remains that had Trump himself not been such a bizarre, foolish, conspiratorial narcissist, we could have easily had a nation that saw the coronavirus and our response to it as a health issue, not a political one. Because Donald Trump needed to be the big boss birthday boy and smarter than everyone else and always successful and never wrong, he denied and obfuscated and argued and eventually caused tens of millions of his acolytes to believe that wearing a mask is tantamount to the end of American freedom. That is on him.

Many people would have died in this pandemic no matter what. Even the most responsible countries had a learning curve, during which the disease spread. The position we find ourselves in today, in August of 2021, half a year after vaccines became available to the public, as local school board meetings descend into screaming matches over mask mandates and intensive care units in Louisiana and Mississippi overflow, is not the natural result of the virus. It is the result of political actions. And those deadly political actions can all be traced back to the determination of Donald Trump to do the stupid things that he did, causing his pathetic minions in the Republican Party to mimic him, and convincing millions of Americans who didn’t know better that the danger they face does not exist.

It is fair to guess that, compared to even a semi-competent but not deranged Republican president, America has suffered hundreds of thousands more fatalities during this pandemic than necessary. We could have quite easily had a president who was racist, who protected the rich at the interest of the poor, who was just as bad as Nixon or George W. Bush, but who was not irrational enough to think that there is a reason to doubt that a mask can help stop the spread of infectious droplets expelled from human mouths. We could, today, be wrapping up the vaccinations of just about everyone. Instead we are still mired in a disaster. Donald Trump’s hands are small, but they hold an entire war’s worth of dead bodies.

[Hamilton Nolan is a labor reporter for In These Times. He has spent the past decade writing about labor and politics for Gawker, Splinter, The Guardian, and elsewhere. You can reach him at Hamilton@​InTheseTimes.​com.]